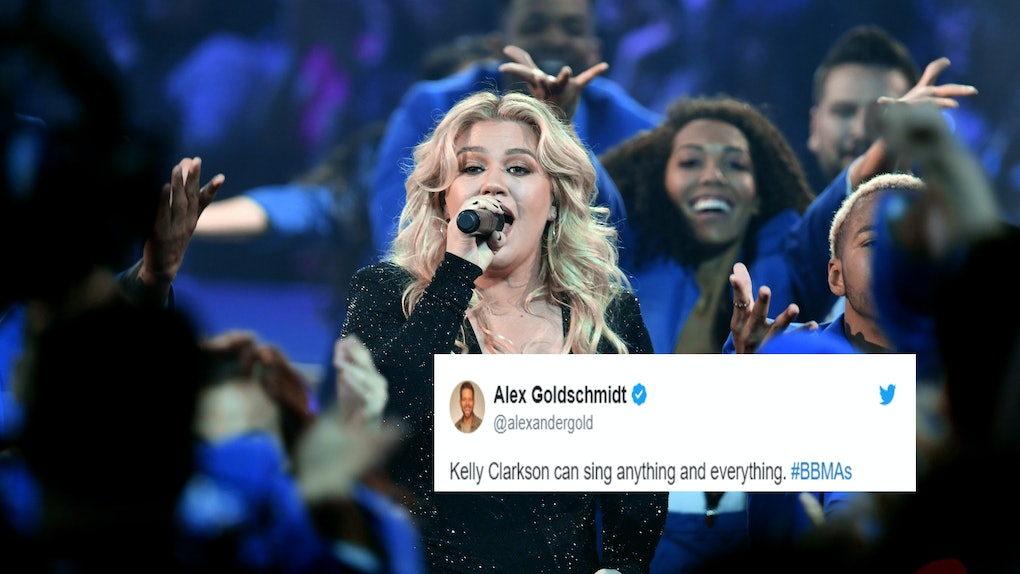 Kelly Clarkson can do no wrong in my book, and she proved that while hosting the Billboard Music Awards for the second time. The original American Idol winner opened the May 1 ceremony with a mashup of the year's biggest musical hits, and these tweets about Kelly Clarkson's medley at the 2019 BBMAs are even bigger proof that we'll never move past a moment like this.

ICYMI, Clarkson began the live ceremony from Las Vegas' MGM Grand Garden Arena, but even as a host, she showed off her golden pipes to the crowd. Her first appearance after Taylor Swift and Brendon Urie's opening performance of "ME!" definitely had to be a little showy, because how else will people remember you after such a neon-colored spectacle? As a second-time host, Clarkson emerged onstage as cool and confident, but trouble hit when she tried to sit with her buddy Terry Crews and a security guard (or, you know, NFL star Rob Gronkowski) wasn't so sure she was one of the night's leading ladies.

Unable to convince Gronk the Guard that she was one of America's biggest stars, Clarkson whipped out her biggest weapon to prove otherwise. She began a medley of songs nominated for BBMAs, including Florida Georgia Line's "Meant to Be," Maroon 5's "Girls Like You," and Cardi B and J Balvin's "I Like It." The fun ended when Gronk refused to play along, but Clarkson fought back, asking audience member and former American Idol judge Paula Abdul to vouch for her. Paula may have been famous for her heartfelt dances and emotional critique back in the old days of Idol, but she wasn't too into backing up Kelly. Well, we all have to be a Simon Cowell sometimes.

Clarkson would perform her new song "Broken and Beautiful" later in the evening, but BBMAs viewers were quick to praise her first performance on Twitter. At this rate, where's Ryan Seacrest telling us how to vote for her?

Clarkson's shoutout to her American Idol roots also got fans talking. Did Paula Abdul intentionally shade her? Anyone familiar with the original judges of the FOX singing competition knows that Abdul could be a little spacey sometimes, so perhaps the legendary recording artist was only poking fun at her own past during their interaction.

Any old-school American Idol fans also would have noticed a sighting of fellow alum Jennifer Hudson in the audience, while former, albeit short-lived, judge Mariah Carey was the recipient of the BBMAs' Icon Award. Rising star and 2019 BBMAs performer Lauren Daigle was even featured on the show in 2010 before getting cut during the season's Las Vegas rounds. Are the BBMAs trying to tell us something? Fingers crossed for an American Idol reunion tour!

No surprise, but Clarkson killed it in her shining moment as host, and we'd love to see her kick off the BBMAs again in the future. Clarkson 2020, anyone?