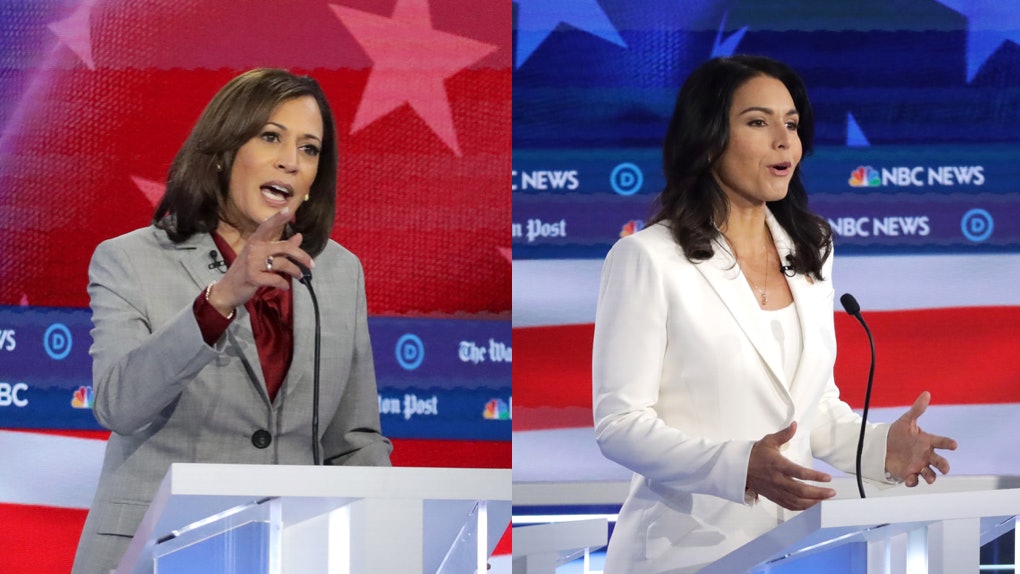 These Tweets About Kamala Harris & Tulsi Gabbard At The Nov. 20 Debate Cheer This Exchange

Well everyone, it's that time again. On Wednesday, Nov. 20, the qualified ten presidential candidates took the stage in Atlanta, Georgia for the next round of Democratic debates. Everyone showed up ready for drama, but these tweets about Tulsi Gabbard and Kamala Harris at the debate showed that the excitement started early on.

Early in the night Gabbard argued that she would work to "rebuild the Democratic Party" into a party that "actually hears the voices of Americans who are struggling all across this country," and to end interventionist foreign policy. Though Gabbard did not directly mention Harris in her remarks, the moderators turned to the California senator for a response, prompting an "oh, sure" from Harris. Turns out, Harris had plenty to say.

"I think that it's unfortunate that we have someone on this stage who is attempting to be the Democratic nominee for the president of the United States, who during the Obama administration spent four years full-time on Fox News criticizing President Obama," Harris said. "Who, when Donald Trump was elected — not even sworn in — buddied up to Steve Bannon to get a meeting with Donald Trump in the Trump Tower." Gabbard has repeatedly appeared on Fox News programs, but was not a full time contributor. Elite Daily reached out to representatives of Gabbard for comment, but did not immediately hear back.

Harris then went on to point that Gabbard "fails to call a war criminal by what he is — as a war criminal," referring to critiques of Gabbard as an alleged apologist for Syrian President Bashar al-Assad. Harris concluded her response by saying that she was more suited to the Democratic nomination than Gabbard because she could "go toe to toe with Donald Trump" and "rebuild the Obama coalition." Gabbard dismissed Harris' response, suggesting that the California senator was "continuing to traffic in lies and smears and innuendos." However, Harris' criticism of Gabbard echoed similar critiques that Gabbard has routinely faced from progressives — critiques that have been well-documented.

The exchange between Gabbard and Harris quickly gained attention on Twitter, with many Twitter users tweeting their support of Harris' remarks.

Some people expressed their feelings via meme.

A couple of Twitter users went so far as to make Game of Thrones comparisons of the exchange:

And some people just called out the network.

It's not the first time that Gabbard and Harris have gone head to head during a presidential debate. During the July 31 Democratic debate, Gabbard criticized Harris' record on criminal justice as California's attorney general. Harris clearly did not forget that exchange, and was prepared to return the favor on Nov. 20 by slamming Gabbard's own record.

The Nov. 20 debate stage was a bit smaller than the last one on Oct. 15, as former Rep. Beto O'Rourke of Texas dropped out of the race on Nov. 1. Former United States Secretary of Housing and Urban Development Julián Castro also did not meet qualifications on polling numbers and funding to make the debate stage. However, at least one more politician has entered the race in recent days. On Nov. 14, former Gov. Deval Patrick of Massachusetts announced via his official website that he is entering the 2020 Democratic presidential race. The New York Times reported that Patrick filed to be on the primary ballot in New Hampshire, which is the nation's first primary vote, one day ahead of the deadline.

The Nov. 20 Democratic debate is arguably the most important one yet, but we've still got a long way to go until the 2020 presidential election.