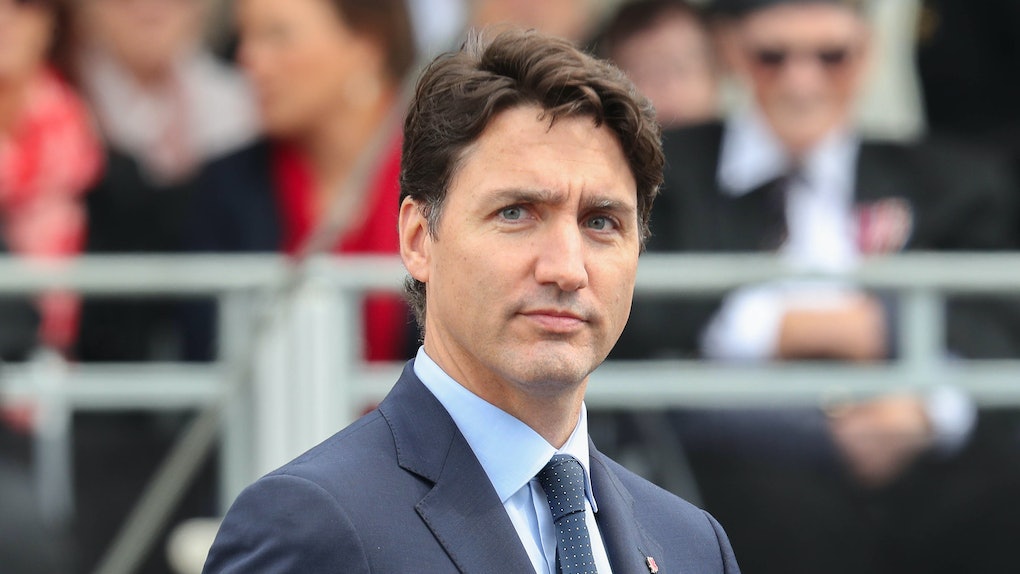 These Tweets About Justin Trudeau's Brownface Photos Are Like, "WTF?"

On Sept. 18, TIME published a photo of Canadian Prime Minister Justin Trudeau wearing racist makeup at a 2001 Arabian Nights party and the internet, predictably, blew up. After the photo of Trudeau wearing brownface circulated online, Trudeau apologized for his behavior and admitted that it had not been an isolated event, and he had in fact done so multiple times. In light of the revelation that the Canadian leader has worn racist makeup in the past, these tweets about Trudeau's brownface all ask one question: Why did he think this was a good idea?

In 2001, a 29-year-old Trudeau wore brownface makeup and a turban as part of an Aladdin costume to an Arabian Nights-themed gala at the private school where he was teaching. After TIME published a photo of Trudeau from the gala, the Canadian prime minister said he was "deeply sorry" for having worn the racist makeup, and admitted that he had worn blackface on at least one other occasion. According to CNN, Trudeau mentioned in his apology that he had donned blackface during a high school talent show, where he sang Day O. Then, on Sept. 19, the Canadian broadcasting service CBC News posted an undated video in which a man wore blackface, raised his hands, and made faces at the camera. According to CBC News, Canada's Liberal Party — of which Trudeau is the leader — confirmed that the man in the video was Trudeau. "We can confirm that it is him and it's from the early 1990s," a party spokesperson told CBC. Elite Daily reached out to the Liberal Party for any additional comment, but did not immediately hear back.

On Sept. 18, Trudeau acknowledged in his apology that he "should have known better, but [he] didn’t."

“I take responsibility for my decision to do that," Trudeau added, per Vox. "It was something that I didn’t think was racist at the time. I’m p*ssed off with myself for having done it.” Although Trudeau apologized for his past decisions to don blackface and brownface, many Canadians pointed out that as an adult who was already in the public spotlight, he had no excuse for not knowing it was not OK. Trudeau's father, Pierre, who died in 2000, served as Canada's 15th prime minister from 1968 to 1979 and from 1980 to 1984. Trudeau's decision to wear brownface at the Arabian Nights-themed gala was not all that long ago, either — for context, 2001 is the same year that Britney Spears and Justin Timberlake wore those matching denim outfits to the AMAs, and blackface was just as racist then as it is now.

Despite Trudeau's apology, the three separate instances of brownface and blackface were enough to give social media users pause. Many Twitter users wondered how Trudeau could have possibly thought that wearing racist makeup was a good idea — especially because his tenure as prime minister has focused on messages of diversity and inclusion.

Other Twitter users pointed out that both the blackface and brownface incidents and the ways in which they have been addressed speak to a greater systemic inequality and the absence of accountability in discussions of racism.

Still others compared Trudeau's actions to those of Virginia Gov. Ralph Northam, who apologized earlier this year after a yearbook photo of him wearing blackface went viral.

"I am deeply sorry for the decision I made to appear as I did in this photo and for the hurt that decision caused then and now," Northam said at the time, per CNN. "This behavior is not in keeping with who I am today and the values I have fought for throughout my career in the military, in medicine, and in public service."

These racist photos and videos also surfaced at a bad time for Trudeau, given that he just launched his reelection campaign on Sept. 11, according to The New York Times. Canada's prime minister election is approaching on Oct. 21, and Andrew Scheer, Canada's Conservative leader and Trudeau's main opponent, described Trudeau as "someone with a complete lack of judgment and integrity" after the photos were released. Trudeau has not made any mention of bringing his reelection campaign to a halt, but if the ongoing backlash shows anything, it's that Canadians are concerned about reelecting a leader who publicly promotes inclusion but has engaged in racist behavior. We'll see if Canada accepts Trudeau's apology by Oct. 21, I guess.