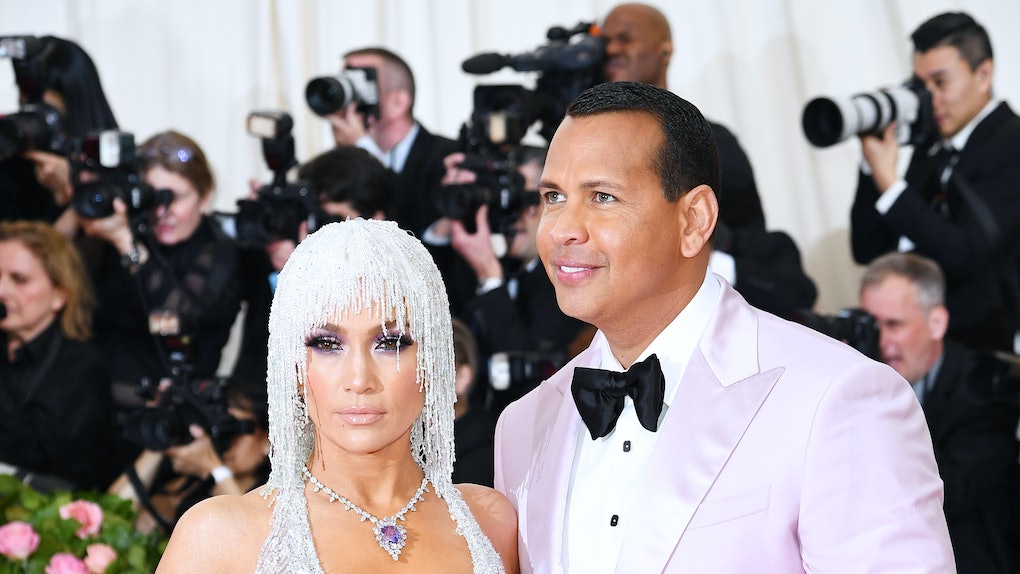 These Tweets About J.Lo & A.Rod At The 2019 Met Gala Will Give You Serious Feelings

The 2019 Met Gala is here, also known as the Super Bowl of the fashion world. It's the one night of the year when A-list celebrities from all different fields come together to celebrate art and fashion at one of the biggest, most extravagant parties ever. Each year, the members of the Met Gala Committee work with Vogue editor-in-chief and host Anna Wintour to plan the over-the-top event. This year, Jennifer Lopez and Alex Rodriguez are making big waves. In fact, fans are all talking about their looks, and these tweets about J.Lo and A.Rod at the 2019 Met Gala are all asking one big question.

While J.Lo wowed in a dazzling Versace gown and headpiece, her fiancé, A.Rod, walked the pink carpet in a matching pink tuxedo. They both looked fabulous, but all of Twitter is wondering: Why didn't A.Rod spit his gum out? The Met Gala is one of the most extravagant, elite parties of the year. Celebrities pose for photos while wearing the most expensive clothes and jewels in the world. And yet, A.Rod made his entrance with a mouthful of gum, and Twitter is wondering why.

Even though fans on Twitter had a lot to say about A.Rod's gum-chewing, they also had a lot of positive feelings about J.Lo's super-glamorous look.

J.Lo and A.Rod got engaged in March while vacationing in the Bahamas. A.Rod recently told Jimmy Fallon on The Tonight Show that he spent months and months planning his proposal so that it would be perfect. He said:

I planned it for about six months. The three days prior to me going down on one knee and getting engaged, I rehearsed for three days in a row. Because I wanted the sunset to be perfect.

Fans on Twitter are especially enamored with the couple and their dreamy romance. As they walked the Met Gala pink carpet, it was clear how much they are in love, and fans celebrated that in their tweets.

The newly engaged couple worked with Wintour to put the 2019 Met Gala together, which has the main goal of raising funds for the Metropolitan Museum of Art. Wintour recently told The Hollywood Reporter that the Met Gala is designed to support the cultural life of New York City. She said:

We never lose sight of the fact that the aim of the gala is to raise funds for the Costume Institute, so we can support its place in the cultural life of New York City and beyond.

It makes perfect sense that J.Lo and A.Rod would be a part of the team to help support a New York City landmark, since they're both tried and true New Yorkers at heart. A.Rod played baseball for the New York Yankees from 2004 to 2016, and J.Lo sang about her roots in The Bronx in her hit single "Jenny From the Block." Based on fans' reactions, it was clear that the couple got a lot of attention for their hometown at this year's Met Gala.

More like this
Olivia Rodrigo's "Deja Vu" Music Video Outfits Are All Delightfully Retro
By Margaret Blatz
These Tweets About Taylor Swift's "Mr. Perfectly Fine" All Ask 1 Important Question
By Sydney N. Sweeney
These Songs About Loving Yourself Need To Be On Your Playlist
By Michele Mendez
Stay up to date