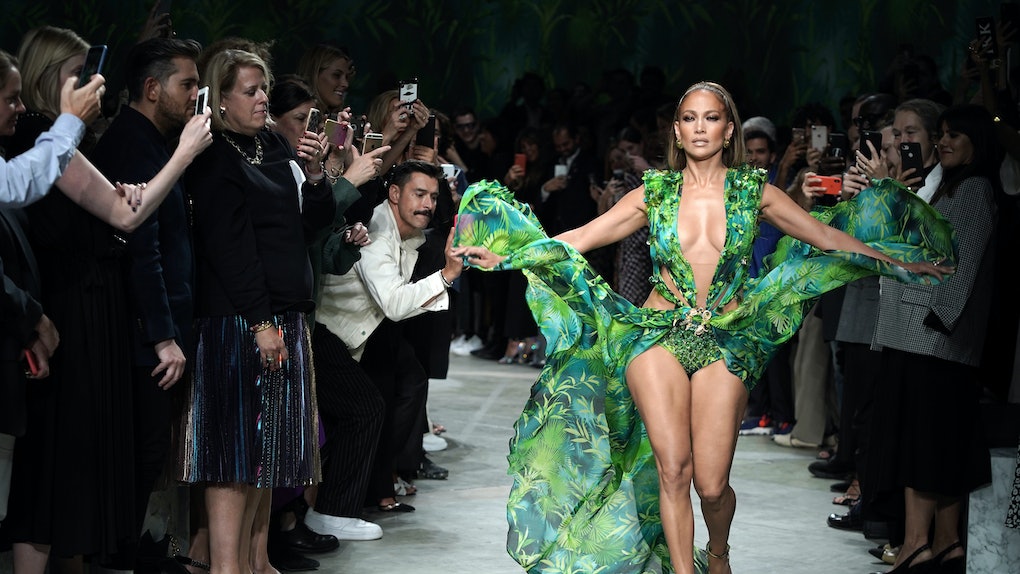 No one was ready for what happened at the Spring 2020 Versace Fashion Show. Closing the show, because it was literally show-stopping, J.Lo walked down the catwalk in THAT green dress she wore to the Grammys 20 YEARS AGO. You know the one. Two decades later, Jenny from the Block did it again and she looked as gorgeous as ever. What a time to be alive. Of course, the internet immediately gave her a standing ovation, and these tweets about Jennifer Lopez rewearing her 2000 Grammys dress are EVERYTHING.

In case you're one of the few that don't know what I'm talking about, well, back in the year 2000, Jennifer Lopez wore a green Versace gown to the 42nd Annual Grammy Awards. People loved the outfit so much that it caused a huge Googling frenzy online. Back then, Google didn't have images in its search engine but after the internet took one look at J.Lo in that outfit, Google had no choice but to create Google Images. Honestly, name me a celebrity who has more power than J.Lo because guess what? J.Lo did that.

It's been over nineteen years since that iconic night happened on Feb, 23, 2000, and the internet totally hasn't forgotten. Oh no. Actually, it seems the internet is just as obsessed as ever with Jennifer Lopez's Versace dress because when they saw her in that look once again at the end of the Spring 2020 Versace Fashion Show, fans couldn't help but gush about it online.

Thankfully, because it's 2019, fans can now happily look up the picture on every social media platform out there. Trust me, you won't be able to escape this look because it seems that everyone on the internet is talking about it.

Honestly, I'm not exxagerating when I say J.Lo looks exactly like she did that fateful night in 2000... if not better! I need to know what J.Lo has been eating and drinking all these years and inject whatever it is into my veins, because I literally don't know how she manages to look so dang good!

Anyway, although J.Lo's appearance hasn't changed on bit since she first wore her iconic green dress, that doesn't mean a lot in the rest of her life hasn't changed. She was married to Mark Anthony in 2004 and they were together for a decade. They had two beautiful kids together, Emme Maribel Muñiz and Maximilian David Muñiz. In 2014, she and Marc Anthony divorced, and since then, she's moved on with famed baseball player, Alex Rodriguez. Now, they're engaged to be married!

Lopez's little daughter Emme appears to be following in her mother's musical footsteps, because she's got quite the pair of pipes on her, too.

If she's got the same gorgeous voice as her mom, perhaps she also carries the same no-aging-after-the-age-30 genes her mom has, too? If so, I am extremely jealous.