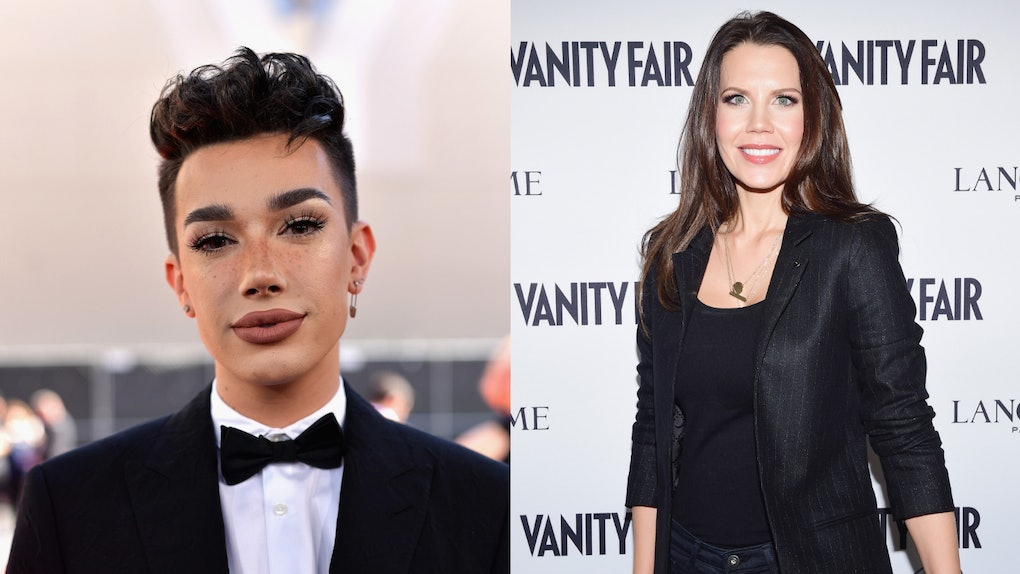 If you're not completely caught up with the drama, it might be worth getting a little familiar with what's going on between these two creators — and it all has to do with gummy vitamins. On May 10, YouTube beauty guru Tati Westbrook, posted a 43-minute video on YouTube called "BYE SISTER..." In the video, Westbrook talks about the reasons she decided to sever ties with her former mentee, James Charles, but the main reason was over Charles' April Instagram Story promoting Sugar Bear Hair supplements. This was a big deal to Westbrook, because Sugar Bear Hair is a big competitor of Halo Beauty, Westbrook's beauty brand — and according to Westbrook's video, Charles wouldn't promote Halo Beauty on his own channel. Westbrook complained that after she and her husband worked to put "millions of dollars" in Charles' pockets, his decision to promote Sugar Bear Hair seemed like a huge betrayal.

Later that day on May 10, Charles responded with a video called "tati" where he apologizes and addresses various points Westbrook made in her original video. At one point, Charles said, "What sucks most is I know there's nothing I can say or do to ever earn that friendship or trust back."

While Charles' video indicated that he was devastated at the loss of his friendship with Westbrook, people on Twitter had a lot of feels about Charles' video and had a hard time believing the YouTuber's apology was sincere.

According to Cosmopolitan, Charles has apparently lost 1 million subscribers since Tuesday, May 7.

Before posting his apology video on May 10, Charles posted an apology on his Instagram Story, per Buzzfeed. In the post, he apologized to Westbrook, saying she's been like a mother to him and has provided him with more "love, support, resources, and advice" than he could ask for. In the story, Charles also talked a little bit about his decision to promote the Sugar Bear Hair supplements, saying:

This weekend I did an Instagram story for Sleep Vitamins that I've been taking, because the brand helped me with security when the crowd around me at Coachella became unsafe. I did not accept any money for the post. As most of you know, Tati has a vitamin brand which I take on a daily basis, but in the moment, I did not think about the competition, which was a major oversight.

Charles added that he's supported Westbrook both online and offline, but in Westbrook's initial video she said she felt that all the work she and her husband had done for Charles — like mentoring him, negotiating deals on his behalf, promoting his products on YouTube — had not been reciprocated. The two have been friends for at least two years since Charles reached out to Westbrook over Insta DM when he was starting out as an influencer at 17 years old.

Stay tuned to see what happens next with this famous relationship. Or just keep looking at Twitter reactions to the whole thing, since those can tend to get pretty wild, too.