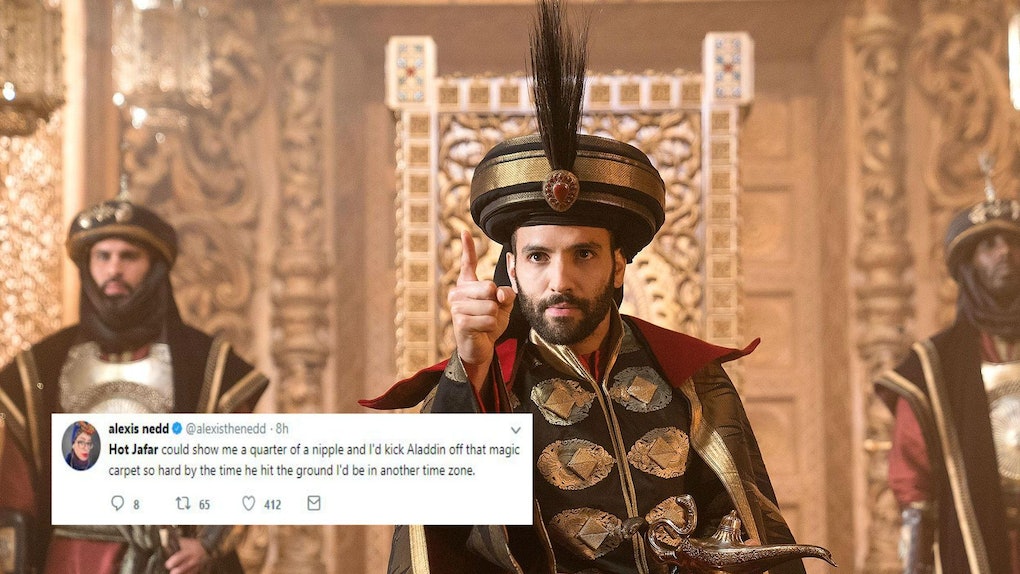 Disney is upping their game come 2019. After one live-action remake film a year since 2015, the Mouse House will start cranking them out come next year with not one, but three live-action remakes of classic Disney cartoons. Dumbo arrives in March and The Lion King arrives in July. In between comes the live-action remake of Aladdin, starring Will Smith as the genie, newcomer Mena Massoud as Aladdin, Naomi Scott as his lady love Jasmine, and Marwan Kenzari as the evil Jafar. But these tweets about Jafar in the live-action Aladdin suggest perhaps Aladdin may be overshadowed as the movie's main heartthrob.

For those looking to get a little more familiar with Marwan Kenzari, he's an actor of Tunisian-Dutch descent who has been working in films since 2008. He first crossed over from the Netherlands to the American market in 2016 with the film Collide, which co-starred Anthony Hopkins. He was also in the Ben-Hur remake with Jack Huston and Morgan Freeman that also came out that year.

Last year, he had roles in both Tom Cruise's remake of The Mummy and Kenneth Branagh's Murder on the Orient Express. This casting in Aladdin is hopefully his big breakthrough role, and one that could make him a household name.

That is if the photos haven't already done it for him.

The thirst on Twitter is usually reliable, but Jafar's good looks and Marwan Kenzari's naked torso were a potent combination. It didn't help many were not feeling the styling and costumes of the main leads for the film. The Jafar costume and overall look was the only one crossing the 50 percent approval rating mark, even before the shots of him half naked emerged.

One major concern from the image was Will Smith, who is not blue in the cover art, though some chalked this up to the CGI not being done yet. (Smith later took to Instagram and clarified the image on the cover was of him "in his human disguise," thus explaining the lack of blue skin.)

For those who are concerned the costuming and hair for the film are not on point, the good news is Guy Richie, the director, has been made aware of the cultural insensitivities of the 1992 original. He's working with "an army of cultural advisers" to make sure this doesn't happen here.

But as far as Twitter seems to see it, the best upgrade he's made is in the villain category. Not that being hot for villains is an unusual situation. (Consider, for instance, all the Malfoy lust over in the Potter fandom.) But perhaps Richie should take a cue from Twitter's infatuation with the man audiences are supposed to be rooting against and give just a little bit of this swag to the poor newbie who is the titular lead in the film, and thus far mostly overlooked by the fans.

Because no one is writing thirsty articles about Mena Massoud, that's for sure.

The new live-action Aladdin arrives in theaters May 24, 2019.

More like this
This Video Of Disneyland's Marvel's Avengers Campus Is Super
By Cianna Garrison
Emma Stone's 'Cruella': Premiere Date, Trailer, Cast, Plot, & More
By Abby Monteil and Dylan Kickham
Here's How To Stream 'Nomadland' So You Can Finally Get The Hype
By Rachel Varina
Stay up to date