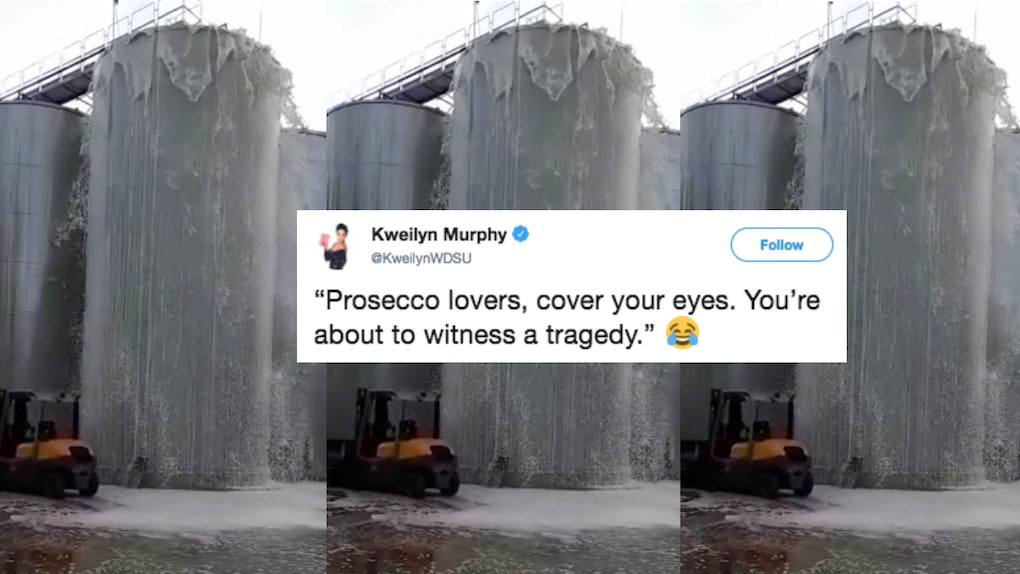 These Tweets About An Italian Winery Spilling 8,000 Gallons Of Prosecco Are So Relatable

I have been known to spill a glass or two of wine in my life (it happens), but that's nothing compared to what happened recently at a wine distillery in Italy. According to video captured by the L'enoteca Zanardo Giussano, a massive tank of Prosecco somehow exploded, leaving thousands of gallons of the Italian white wine overflowing from the container. It is a near tragedy for Prosecco lovers like me, but I'm finding some comfort in messages from Twitter users about the whole ordeal. These tweets about an Italian winery spilling 8,000 gallons of Prosecco are so relatable.

When the news first hit my Twitter feed, I have to admit I was impressed by just how massive this leak was. In the video posted by the L'enoteca Zanardo Giussano winery on Sept. 25, you can see gallons upon gallons of Prosecco spewing from the top of the fermentation tank and gushing down the sides of the silver-colored container. Nooooo. At the time the video was taken, it didn't seem like it was ever going to stop overflowing from the wine silo. I've personally never seen anything like this before. The thought of all that wasted wine makes me want to hop on a flight ASAP and help with the cleanup process with my cup in tow. (Hello, Italian vacation!) It's never a good day when wine goes to waste.

Since the unfortunate incident took place in late September, the video has gone viral. The video has been shared on Facebook by more than 12,000 users and viewed more than 1.2 million times. Twitter users are sharing their thoughts on the massive leak. Yep. I am right there with them, though. It is a sad, sad thing when a fine wine like Prosecco can't be enjoyed by wine lovers like me. Don't mind me, I'm still feeling pretty emotional over it all.

A little piece of me dies every time I watch the video. Honestly, the way the Prosecco is gushing over the top of the tank, it sort of looks like the winery is having some real tears of its own. By the way, this isn't just any old Prosecco that went to waste. You should know that the winery is located in Conegliano, Veneto — that's the heart of Italy's wine region. Because of its prime location, you know they must make a legit bottle of Prosecco. (I've never been to Italy's wine country before, but it's for sure on my bucket list.)

As if 2018 couldn't get any more heartbreaking, the icing on the cake might just be all of those gallons of spilled Prosecco. Twitter is accurately capturing all my feelings about the incident, so it is nice to know that there is strength in numbers. When thousands of gallons of Prosecco spills, the internet unites in solidarity. For now, I'm going to raise a glass in honor of the bottles lost. You should, too. Cheers!