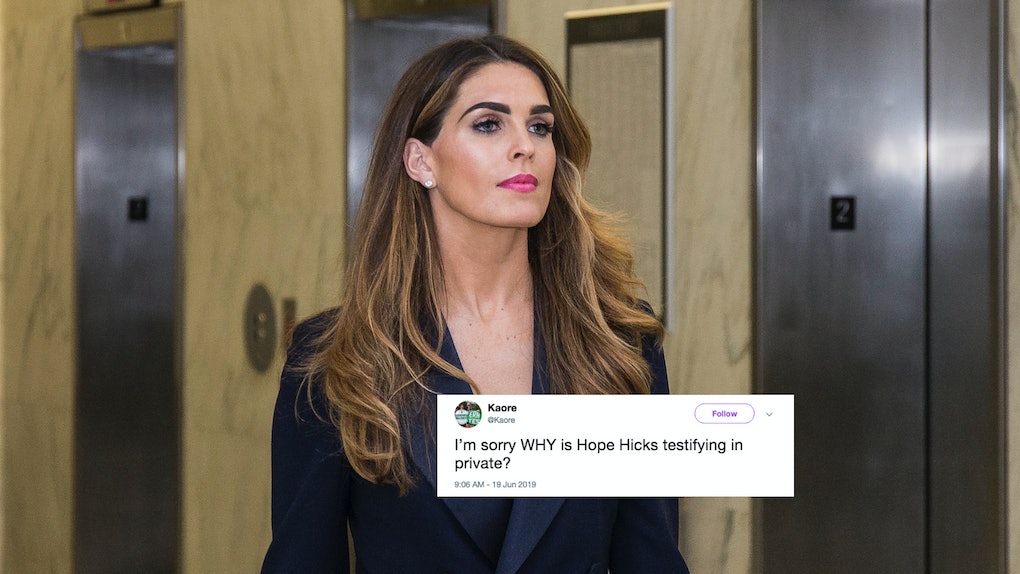 Another day, another make-or-break testimony event. On Wednesday, June 19, former White House Communications Director Hope Hicks appeared in front of the House Judiciary Committee to disclose her experience working with President Donald Trump and his administration. Even though we're not able to hear what the former Trump aide has to say, these tweets about Hope Hicks testifying to the House Judiciary Committee is full of questions.

On June 19, Reuters reported that former Trump aide Hope Hicks is appearing before the House Judiciary Committee behind closed doors to discuss her past role with the Trump administration. Even though the likes of Attorney General William Barr, Trump's former lawyer Michael Cohen, former Trump campaign chairman Paul Manafort, and others have all testified before Congress, Hicks marks the first individual within the Trump administration's immediate circle to take the stand

According to Reuters, Hicks will testify about possible instances of obstruction of justice that were mentioned in Special Counsel Robert Mueller's report, which was publicly released publicly on April 18. In the report, Mueller examined 10 different incidences which investigators examined while considering obstruction of justice, including the president's firing of the then-FBI Director James Comey, Trump's conduct towards Cohen, his behavior towards Mueller's investigation, and more. However, due to long-standing Department of Justice (DOJ) precedent, investigators concluded that they could not make a determination on whether the president obstructed justice, although they expressly did not exonerate him. The DOJ concluded that there was not sufficient evidence to prove obstruction of justice had occurred. The White House did not previously respond to Elite Daily's request for comment regarding details alleged in the report, and as of publication the president has not been formally accused of nor charged with any crime.

Following the news that Hicks is testifying, Twitter immediately sharing their thoughts on the matter, with many people disappointed that the event won't be shared with the public.

In addition to discussing alleged obstruction of justice, Hicks will also reportedly be asked about possible hush money payments made by the 2016 Trump campaign to adult film actress Stormy Daniels (also known as Stephanie Clifford), who claimed to have had an affair with Trump in 2006. In February 2018, Cohen admitted to paying Daniels $130,000 on Trump's behalf in October 2016, just one week before the presidential election. Trump has consistently denied the affair allegations, although he has admitted to making the payment.

Hicks testifying is a huge ordeal for the Trump administration, closed doors or not. That day, Trump took to Twitter to air his frustrations about the situation, and even though he didn't mention Hicks by name, the timing sure is interesting. He wrote,

This testimony could seriously impact the Trump administration, and according to CNN Hicks and Trump haven't necessarily been on the best terms recently. On June 19, CNN reported that Trump aides have disclosed the former communications director and the president's relationship may have changed. Hicks left the White House in October 2018 and joined New Fox as their executive vice president and chief communications officer, with the pair apparently parting on good terms. However, in this political climate, relationships can change quickly.

As Hicks continues to testify to the House committee, I guess we'll just have to wait and see what the former White House aide has to say. In the meantime, stay alert.