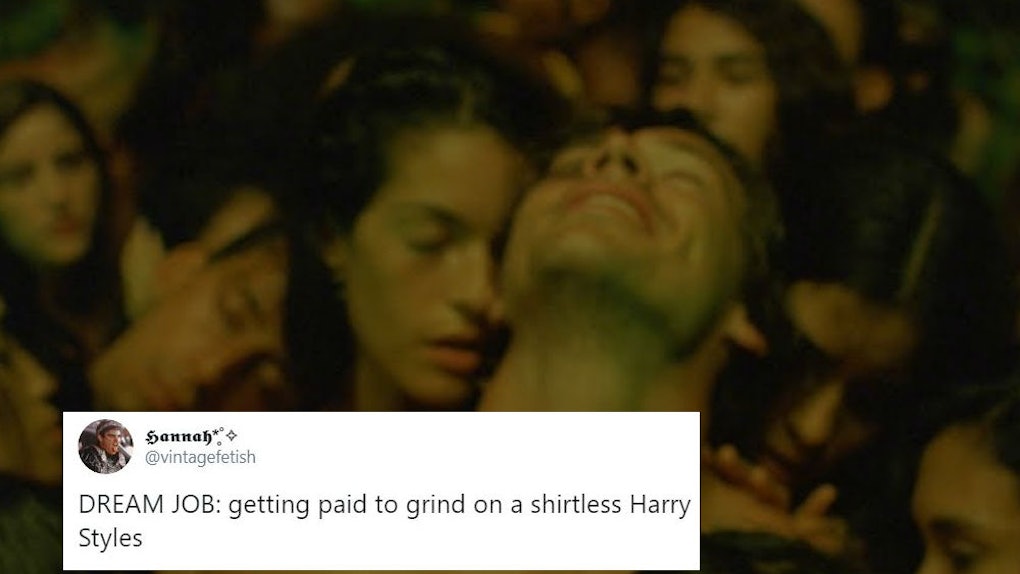 These Tweets About Harry Styles' "Lights Up" Video Get So Deep

Directioners rejoice! Harry Styles has finally released his highly-anticipated new single and I can't keep calm. Let me tell you, Styles did not disappoint with his new tune or its music video. It's no wonder that fans from across the globe are full-on having a meltdown. Between fans who just cannot stop listening, or fans who can barely handle the song's perfection, Twitter is currently being flooded with tweets about Harry Styles' new "Lights Up" music video. Basically, they're the best thing you'll see all day.

Here's the thing, I can hardly blame them. I knew with a two-year hiatus that Styles' comeback would be big, but he has impressed me to no end with this tune. The track has a psychedelic, but soulful vibe and all the lyrics are about being free and true to yourself. It's the perfect followup to his last three singles, "Sign of the Times," "Two Ghosts," and "Kiwi."

The former One Direction member is spreading his wings, starting anew, and making major career strides. Truth be told, ever since Harry shared this super cryptic tweet on Oct. 5, I had a feeling that something mind-blowing was coming our way. Now that it's finally here, it looks like I'm not the only one who is losing it over this track. Nope, Styles' fans are straight up losing it over his new bop and its accompanying video that sees Styles ride on the back of a motorcycle with his shirt open so all his tats are on display. No, I'm not sweating. YOU'RE sweating.

Check out the video below!

Fans these days are tough critics but these tweets really do say it all. Here's what Styles' biggest stans worldwide are saying about "Lights Up."

For starters, there were the fans who flipped out before the song and video were even released. After Styles tweeted for the first time in what felt like forever back on Oct 5, it was our biggest hint that he was about to be back on the grid. Naturally, it sent fans into a frenzy. The one-word tweet, "Do," had fan theories flying across all across the internet.

But once the song dropped, Twitter went wild with excitement over the song's soulful vibe and the video's trippy visuals, but mostly just regret that they weren't an extra in the video so that they could touch Styles' shirtless, sweaty chest. Which, like... same.

But Styles' bare chest wasn't all Twitter was raving about. Fans were so moved by the song's message about being free, one fan going into detail about how much the lyrics meant to her. "There's definitely something to say about lights up lyrics being about accepting yourself vs. the video showing harry with all genders vs. the song itself having clear gospel influences and i'm excited to hear someone more literate than i am discuss it," the fan wrote in a tweet.

Well, Harry Styles did it again! I and all of Twitter are very much impressed.

More like this
This Video Of Wonho Answering Trivia Questions About Himself Is Required Viewing – EXCLUSIVE
By Brandy Robidoux
These Tweets About The 2021 Billboard Music Award Nominations Are All Over The Place
By Michele Mendez
These Tweets About The Weeknd & Ariana Grande's "Save Your Tears" Remix Are All About Their Fire Vocals
By Sydney N. Sweeney
Stay up to date