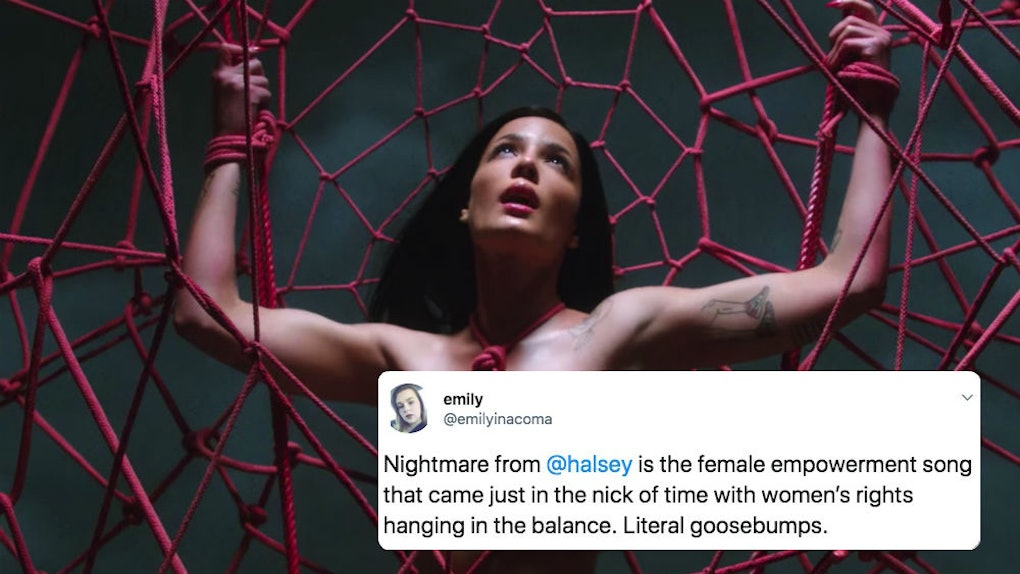 Halsey’s been making a lot of moves lately. Right on the heels of her BTS collaboration on “Boy with Luv," the 24-year-old singer announced that she was releasing some new music. During a May 9 show at New York City’s Webster Hall, Halsey revealed a new single called “Nightmare” was on the way. Well, it’s here and so is the music video. And fans are loving every second of it because of its impactful message about female empowerment. It’s one of those must-see music videos and all the tweets about Halsey’s “Nightmare” music video will make you feel so empowered, too.

In the weeks leading up to the song’s release, Halsey teased fans with lots of clues. First, she blacked out all of her social media on May 1. On May 2, she announced that she was performing two shows at Webster Hall. Then, on May 7, she announced that tickets would go on sale at 5:17 pm. So, she was definitely hinting at the fact that a new era was on the horizon.

The big reveal finally came on May 9 during Halsey’s show at Webster Hall. At the end of the show, when the curtain was lowered on the stage, the title of the song and its release date were projected onto the curtain. Obviously, fans were thrilled about the big announcement.

They were so thrilled, in fact, that they started tweeting up a storm about the song and video before it was even released:

Here’s how Halsey announced that a new single was coming down the pipeline:

What a cool way to announce a new single. Halsey always seems to keep the fans guessing when it comes to this stuff — especially when it comes to the vibe and message behind her new songs. You never know what to expect. And when it’s time to deliver the goods, she really does her fans a solid. The video for “Nightmare” is truly something special because of the empowering message behind the song. The message is essentially: Women don't owe anyone a damn thing. And the timing of this message is pretty on point.

You can watch the video down below, if you haven’t seen it yet:

Needless to say, the video — and the message behind it — is so good. Fans on Twitter can't help but feeling like the empowering, girl-power message behind the song and video came at the exact right time as a bill banning virtually all abortions passed into law in Alabama. And they’re showing a lot of love to Halsey and this video on Twitter. Here’s what fans are saying right now:

It’s pretty obvious that Halsey’s fans are loving what she’s doing right now. It seems like this new single was exactly what they needed, especially since Halsey hasn’t released a new single solo since “Without Me” back in October 2018. She did, however, collaborate with Yungblud on “11 Minutes” which came out in February 2019. So, it’s not like fans have been totally starved for new music. But it’s always nice to hear something fresh — especially something that's so timely that's drawing attention to such an important issue in our society.

More like this
These Tweets About Taylor Swift's "Mr. Perfectly Fine" All Ask 1 Important Question
By Sydney N. Sweeney
Rosé From BLACKPINK's "Gone" Music Video Is The Ultimate Sad-Girl Aesthetic
By Abby Monteil
These Tweets About Regé-Jean Page Leaving 'Bridgerton' Are Royal Bummers
By Cianna Garrison
Stay up to date