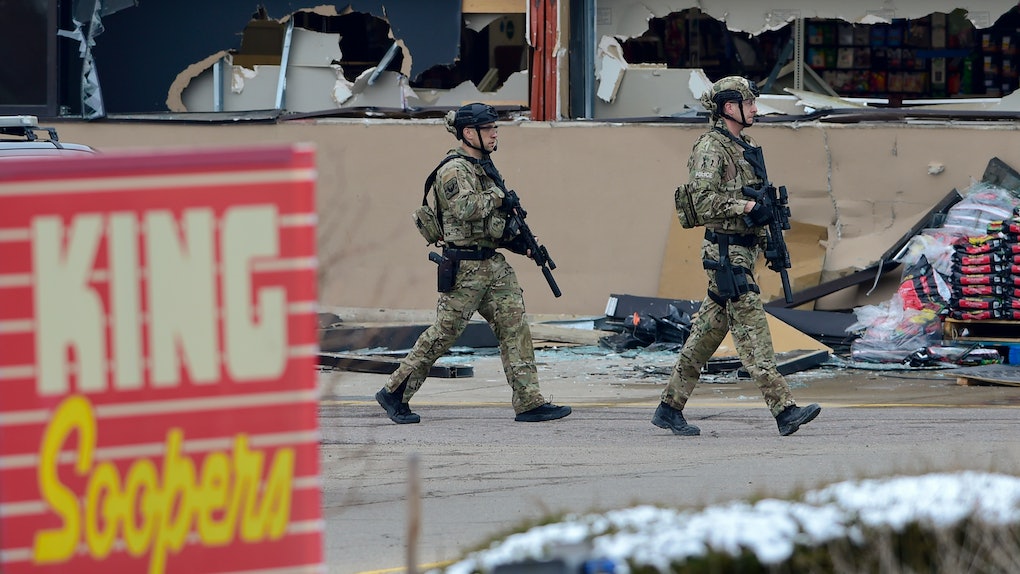 Less than a week after the March 16 spa shootings in which eight people were killed in the Atlanta, Georgia area, another mass shooting event has happened in Colorado. On March 22, 10 people were killed in a shooting at a supermarket in Boulder, Colorado. After the horrifying event, people across the internet are once more mourning the victims of gun violence — and calling for action. These tweets about gun control after the Boulder shooting demand big changes after multiple mass shootings in only one week.

According to multiple reports, on Monday, March 22, a gunman opened fire on shoppers at a King Sooper's grocery store in Boulder, Colorado. The gunman killed 10 people, including supermarket workers, shoppers, and a police officer, before being apprehended by law enforcement. On early Tuesday, March 23, Boulder Police Chief Maris Herold announced the shooter had been charged with 10 counts of murder. While officials haven't confirmed all details, CNN reports the gunman used "an AR-15 style rifle" to carry out the assault.

Now, people all over Twitter are once more mourning the tragic loss of lives, just days after eight people — six of them Asian women — were killed in a mass shooting event in Georgia.

Between the Atlanta shooting on March 16 and the Boulder shooting on March 22, there have been five additional mass shooting events across the country, per CNN, including shootings in California, Oregon, Texas, and Pennsylvania. With multiple shootings once more putting the United States' unique gun violence problem at the forefront of everyone's attention, many are calling for action. On social media, many are calling for lawmakers in Congress to pass gun reform legislation, including universal background checks for potential gun buyers.

Universal background checks are one of the most popular gun safety reforms proposed by advocates. As of 2021, people buying guns are subject to a background check if they're buying through a licensed seller — but not if they're buying a gun in a private, person-to-person sale, online, or at a gun show. (This is also sometimes called "the gun show loophole," although it applies to any private sale) Earlier this month, the House of Representatives passed two bills that would eliminate the private sale loophole and tighten existing background check requirements. They have not yet gone to the Senate. Polls have shown more than 80% of Americans support universal background checks.

Experts agree universal background checks are key in preventing gun violence. In a January 2017 survey published by The New York Times, a panel of 32 scholars in criminology, public health, and law weighed in on universal background checks. They rated it as the most effective policy to prevent gun deaths, ranking it first on a list of 29 possible gun-related policies.

People on Twitter are also calling for a ban on civilian access to assault-style weapons, such as the AR-15.

While automatic guns are illegal for private citizens to own, semi-automatic rifles like the AR-15 are legal, and, until a 2019 ban on bump stocks, these guns could be modified to fire at machine-gun rates. The AR-15's frequent use in mass shootings has led gun safety advocates to call for a ban on assault weapons, a term used to refer to a class of semi-automatic weapons that includes the AR-15.

Congress has passed a ban on assault weapons and high-capacity magazines before. In 1994, President Bill Clinton signed the Violent Crime Control and Law Enforcement Act, which placed a 10-year ban on semi-automatic assault weapons and high-capacity magazines. The law later appeared to be effective: According to a 2019 study, mass-shooting fatalities were 70% less likely to occur during the 1994 to 2004 federal ban period. After the law expired in 2004, some of America's most lethal mass shooting events were perpetrated using assault weapons: Sandy Hook, Orlando, Las Vegas, Sutherland Springs, and Parkland. As of 2021, multiple attempts to renew the ban have been unsuccessful in Congress, with the most recent attempt taking place in 2019. Per Gallup, about six in 10 Americans support an assault weapons ban.

Amid revived calls for action, President Joe Biden spoke on March 23 in support of renewing the ban on assault weapons. "I got that done when I was a senator," Biden said of the 1994 ban. "It passed. It was a law for the longest time, and it brought down these mass killings. We should do it again," he added. Assault weapons bans and universal background checks are not the only gun legislation being discussed. A majority of Americans also support "red flag" laws which would remove a gun from a person who may pose a risk to themselves or others, as well as requiring a license to purchase a gun, per a 2019 PBS report.

According to March 23 data from the Gun Violence Archive, 9,535 people in America have lost their lives to gun violence in 2021 alone. As public outcry for legislation on gun reform builds, it seems like change can't come soon enough.