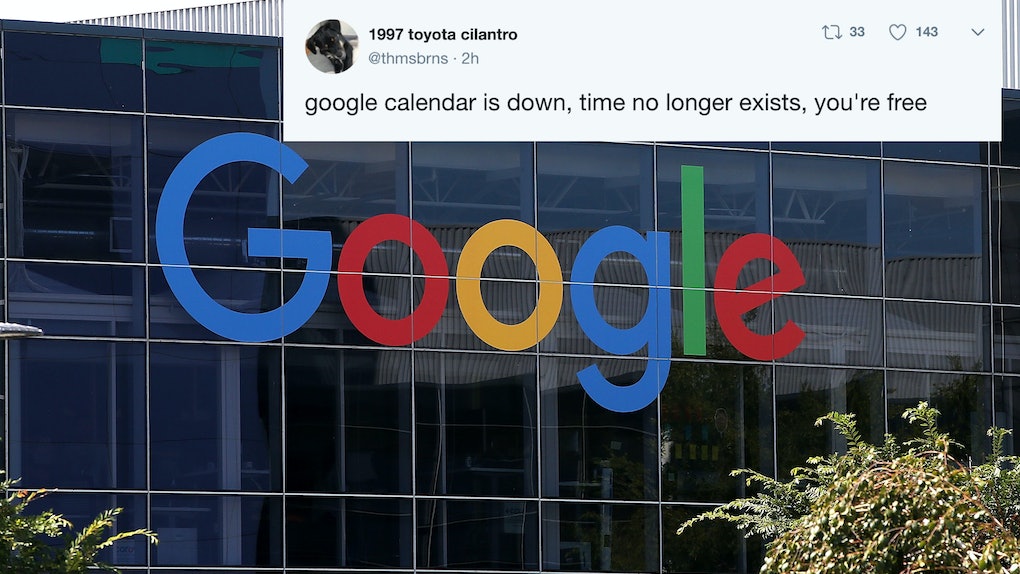 Some workplaces recently came to a screeching halt when Google's time management and scheduling app, Google Calendar, showed users an error message. With offices in scheduling chaos, some Google Calendar users took to Twitter to share memes about the site being down, to figure out why the site was down, and share anecdotes about how they were impacted. These tweets about Google Calendar being down are so hilarious, they'll make you forget that you totally can't access your schedule for the day.

To the horror of many people on Tuesday, June 18, 2019, a "Not Found: Error 404" message popped up when they tried to access Google Calendar. At 7:22 a.m. PT on the day of the outage, the G Suite Status Dashboard confirmed that there was a service disruption with Google Calendar. Just over an hour later, at 8:40 a.m. PT, Google confirmed a service outage and wrote, "Our team is continuing to investigate this issue." According to Gizmodo, this isn't Google Calendar's first service outage. In fact, the service experienced another one just a few weeks prior on June 2, which impacted Google Calendar, YouTube, and some third-party apps.

To turn this potentially stressful situation into something a little more lighthearted, many people impacted by the outage took to Twitter to comment on the absence of Google Calendar from their day. So, this means all our meetings are canceled and we can all go home, right?

Some people took it upon themselves to make some excellent memes about the outage featuring GIFs from Spongebob, The Office, and The Simpsons, among others:

Others, like Twitter user @CaseyNewton, presented alternate schedules for everyone's days since no one seems to know their real ones:

Other Twitter users like @jshirley realized just how much Google Calendar controls their lives, which became painfully apparent when it disappeared:

And, to the contrary, some people bragged about how much Google Calendar didn't control their lives, like Twitter user @MissLeslieG who wrote that this was a pretty good time to be someone who uses an "old school paper date book."

But my personal favorite tweets in the wake of Google Calendar's outage were about the dissolution of time itself — because if Google Calendar doesn't exist, neither does time. Sorry, I don't make the rules! Twitter user @thmsbrns, for example, tweeted, "google calendar is down, time no longer exists, you're free." Another Twitter user, @hels, wrote, "Google calendar is down so legally time doesn't exist anymore."

Sadly, time stops for no outage, and at 10:13 a.m. PT, Google posted another update, confirming that Calendar was back, all your meetings are still on, and now you're late (also, they included an apology). Google wrote,

The problem with Google Calendar should be resolved. We apologize for the inconvenience and thank you for your patience and continued support. Please rest assured that system reliability is a top priority at Google, and we are making continuous improvements to make our systems better.

Well, that was a wild ride. At least now we have a glimpse of what could have been, and how we'll manage our time in the apocalypse. At least we'll always have the excellent meme content that came out of this unexpected service outage.