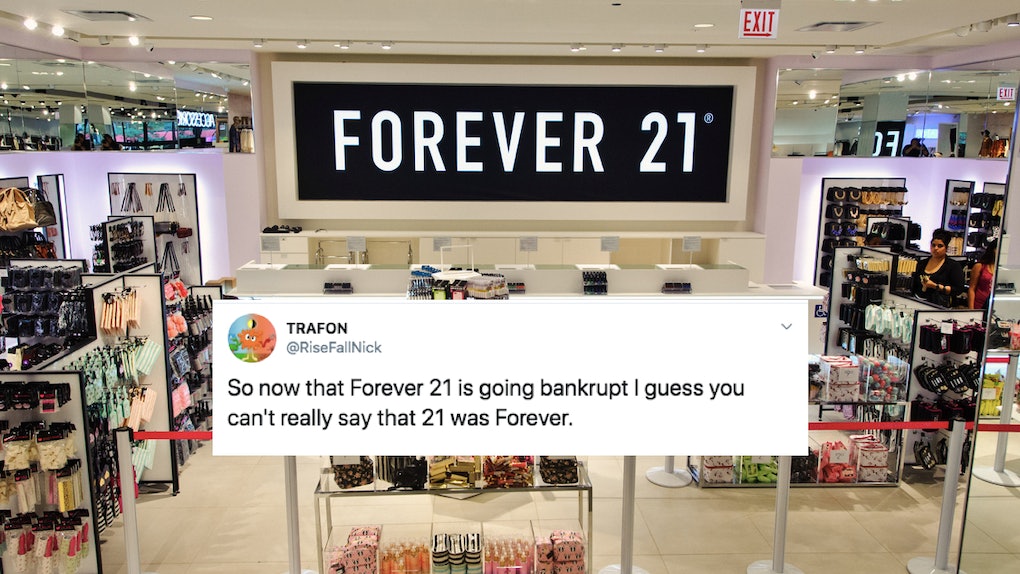 Have you noticed pretty much everyone on social media freaking out about Forever 21 lately, or is it just me? ICYMI, I can confirm that my personal Twitter feed has been borderline taken over by tweets about Forever 21 reportedly filing for bankruptcy, and while the situation is upsetting, some of the tweets themselves are funny AF. Elite Daily reached out to Forever 21 for comment on the bankruptcy reports, but did not hear back by the time of publication. I don't know a single person who didn't shop at Forever 21 at one point in their life, and if the store really is going away for good, I can confirm shoppers over and under the age of 21 will be shook.

Why are so many of the stores you shopped at when you were in your teens going out of business now? I'd argue there are two main reasons. First, websites with super-fast shipping (cough, Amazon, cough!) make online shopping way easier than driving to your local mall and waiting on a long line to check out, and slowly but surely, more and more people are ditching IRL shopping trips and buying their clothes online instead. Secondly, in 2019, fast fashion is becoming a big no-no; people are starting to take a hard look at inexpensive clothes and where they come from, and have begun investing in pieces that are not only higher quality, but will last them longer, too. Don't get me wrong, I hit up my local Forever 21 at least once a month for a good last-minute going-out look, but lately, fast fashion stores aren't as much of a go-to option as they once were, particularly as we, as a society, focus more heavily on sustainability.

It's safe to say no one saw this coming, though many Twitter users believed it was inevitable after one too many food-related slogan tees:

Apparently, the taco-themed apparel is a particularly touchy topic:

Still, many pointed out that it was only a matter of time before eco-friendly fashion options started overpowering fast-fashion companies:

"Face it f21 , you were fun in 2013-14, but you made way too many clothes," wrote one Twitter user, regarding the fast-fashion giant churning out new pieces on a constant basis. "Wow so forever 21 may file for bankruptcy," wrote another user, who went on to suggest, "OR they could scale back, become eco friendly, and not contribute to the fast fashion industry." TBH, not a bad idea!

One thing almost all of Twitter can agree on? A potential bankruptcy sale would be massive, if the reports are true:

The tweets that really hit me in the feels, though, are jokes about the store's name and its promise of ~forever~. Yikes:

Forever 21 hasn't confirmed whether or not it is filing for bankruptcy just yet, but if it does, it's clear the decision could signify a major shift in the world of fast-fashion consumerism as we know it.