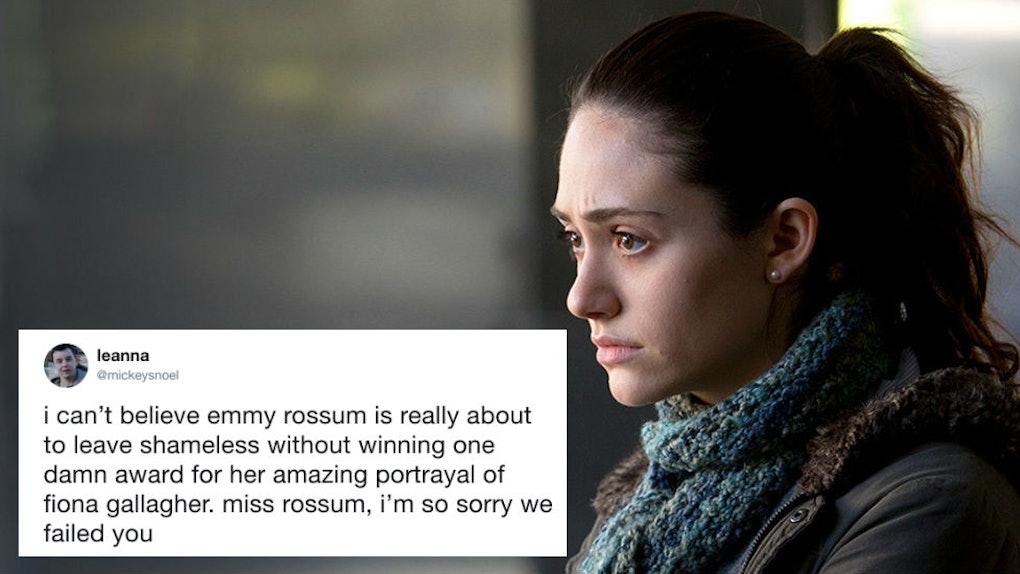 It is a sad day for all the Shameless fans on social media. On Thursday afternoon, Emmy Rossum posted a lengthy, emotional note that ended with the revelation she would be leaving the long-running Showtime drama series. Though Shameless centers on an ensemble cast, Rossum's character of Fiona Gallagher is often considered the beating heart at the center of the show, so obviously fans were pretty heartbroken at the news. In no time, tweets about Emmy Rossum leaving Shameless basically took over social media, as fans were forced to confront Shameless moving forward with no Fiona.

Emmy Rossum took to Facebook to reflect on her time with Shameless — she had been playing the show's hard-working and protective protagonist Fiona Gallagher since the beginning of 2011, for nearly eight years now. In her heartfelt note, Rossum talked about how true it was that he show's cast really did become like a family to her, as she shared in pivotal moments of their lives and they in hers. At first, it just seems like a sweet and reflective note, as the show prepares to enter its ninth season in two weeks' time. But then the big reveal comes at the end:

I know you will continue on without me, for now. There is much more Gallagher story to be told. I will always be rooting for my family. Try not to think of me as gone, just think of me as moving down the block.

Since the first half of Season 9 is already in the can (the first seven episodes premiere on Sept. 9 and the second seven on Jan. 20), Rossum will presumably appear in at least much of the first half of the new season, but it is unclear whether or not Fiona will still be on the show when Season 9 ends.

Of course, this news hit the Shameless fandom incredibly hard. Although William H. Macy's patriarch Frank Gallagher is billed as the show's male lead, Emmy Rossum's Fiona Gallagher is widely considered the true protagonist of the series, as she has been the sole force truly caring for her large family of siblings throughout the show's run.

But this is just one of the several reasons why people are upset by this abrupt exit. Check out some of the Twitter reactions to Emmy Rossum's announcement that she is leaving Shameless:

One of the biggest reasons that Shameless fans are so upset by this, which came up in a bunch of the reaction tweets, is that Emmy Rossum has not once received an Emmy nomination for her lead role of Fiona Gallagher. Shameless fans think this profound, eight-year snub is completely unjust, especially considering that her costar William H. Macy has been nominated for four Emmys, including at the upcoming 2018 ceremony. It sounds like Emmy Rossum will still be part of Season 9, though, so we still have one last chance to see her score a win for Fiona Gallagher.

Shameless Season 9 will premiere on Showtime on Sunday, Sept. 9.

More like this
Shonda Rhimes' Quote About Regé-Jean Page Leaving 'Bridgerton' Is SO Shonda
By Rachel Varina
Simu Liu's Tweets About The 'Kim's Convenience' Finale Promise "Tea & Receipts"
By Dylan Kickham
These Tweets About Jimmy Fallon's TikTok Dance Follow-Up Segment All Say It's Too Little, Too Late
By Brandy Robidoux
Stay up to date