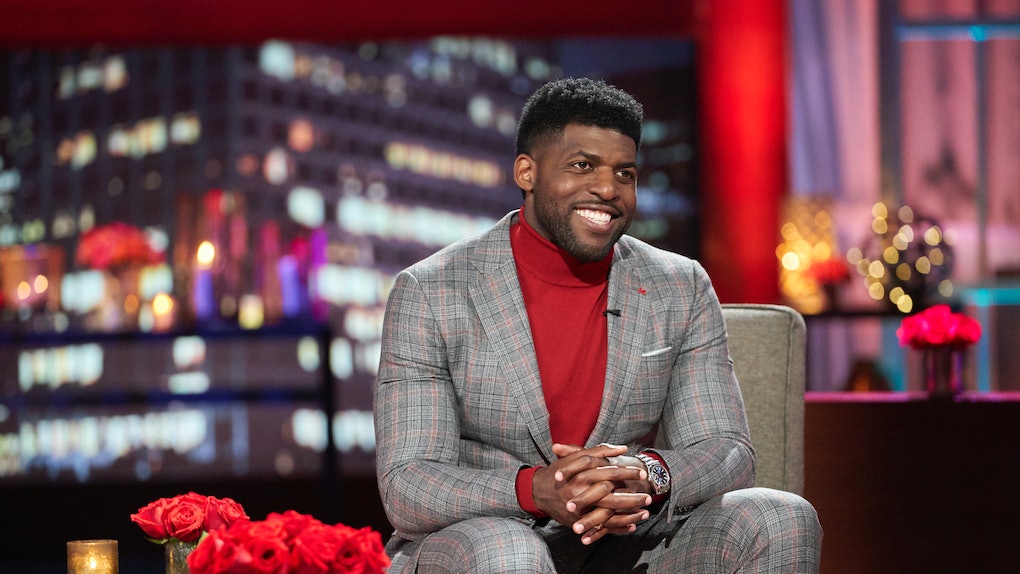 It's been a strange season of The Bachelor. While the series is usually filled with onscreen drama, the controversy behind the scenes proved to be much more serious. On Feb. 13, longtime series host and face of the franchise, Chris Harrison, announced he would be stepping down from his duties after he made comments that "excused historical racism." This meant the show needed a new host — and fast — considering this all went down in the middle of Matt James' season. Luckily, producers found someone to fill Harrison's shoes, and these tweets about Emmanuel Acho hosting "After The Final Rose" for Season 25 show fans were about the casting change... and his suit.

The road to Acho stepping in is a long and disappointing one. Harrison distanced himself from the franchise after his now-infamous Feb. 9 appearance on Extra with former Bachelorette Rachel Lindsay. During the interview, he defended Season 25 Bachelor contestant Rachael Kirkconnell after photos of her at a 2018 antebellum-themed party resurfaced. Kirkconnell issued an apology for the photos on Feb. 11 and Harrison himself apologized and stepped down just two days later.

ABC then worked on selecting a new host to help run the "After the Final Rose" special while Harrison spent time "getting educated." On March 15, fans finally got to see Acho step into Harrison's usual role, and viewers took to Twitter to share their support.

Fans were impressed by Acho's presence, talent, and ability to discuss all of the controversy surrounding the season with grace. And if his interview skills weren't enough (which uh, they were), Acho's suit definitely had viewers talking. The host wore a tight, grey plaid suit with a red turtleneck underneath and fans were here for his lewk.

While the suit paled in comparison to Acho's overall ability to navigate difficult interviews and conversations, it looks like fans agree he was an all around amazing host. Here's hoping Bachelor Nation gets to see more of Acho (and his fashion) in future — and hopefully less problematic — seasons.