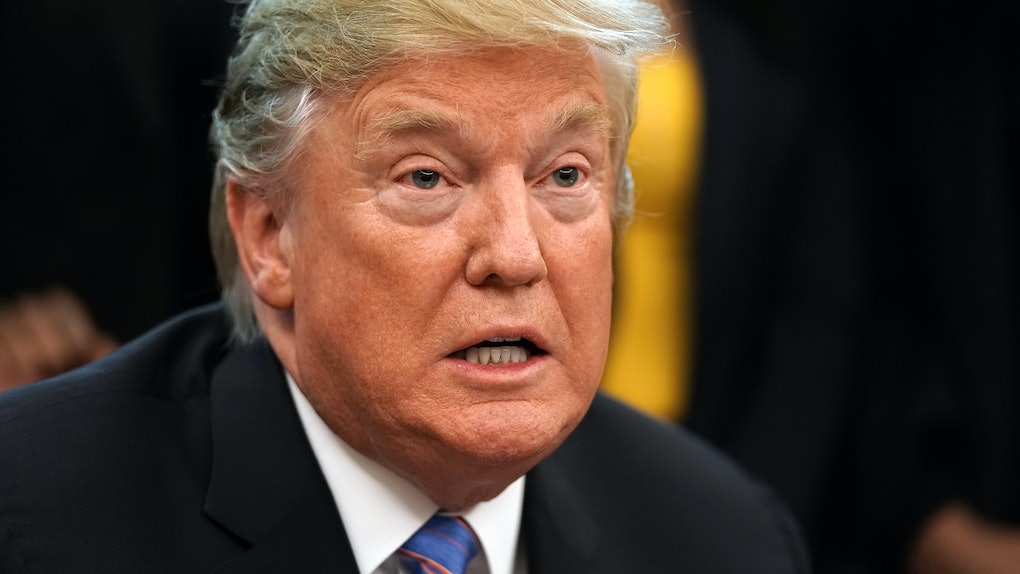 These Tweets About Donald Trump's Fast Food Dinner To Baylor's Basketball Team Are Like, "Again?"

Fast food is on the menu again at the White House. On Monday, April 29, President Donald Trump treated a sports team to some greasy grub in the State Dining Room, marking the third time he's done so — and the third time he's caught backlash for it (because seriously, who does that?). These tweets about Donald Trump's fast food dinner to Baylor's basketball team can't get over this apparent new tradition.

The president laid out the feast on the evening of Monday, April 29 in celebration of the Baylor University women’s basketball team, which defeated Notre Dame in the NCAA women's basketball championship in early April. Like the teams before them, the players had a range of fast food restaurants to choose from: Wendy's, Burger King, Chick-Fil-A, and McDonald's (which is Trump's reported personal fave). And they had several food options. Photos of the dinner show chicken nuggets, burgers, sandwiches and more spread out on platters across a table decorated with flowers. Elite Daily reached out to the White House for additional comment on the meal, but did not immediately hear back.

While the team insists that it had a "good time" in the State Dining Room, Twitter can't believe that Trump gave another group of championship winners the fast food treatment.

"Donald trump has did it again.....giving fast food catering to national champions they deserve better!" one person wrote.

Some people are seriously upset, calling out what they say is a total "lack of respect."

"How lame is it that the President of the United States has fastfood [sic] brought into the White House for the teams that win championships??" another person wondered.

A lot of people were clearly upset that Trump had foregone the ceremony of a White House dinner in favor of the ease of the drive-through. It's not the first time, though, that Trump has been called out for apparently turning what should be an elaborate and special celebration into a fast-food fail.

Trump also hosted a fast food feast for North Dakota State University’s champion football team at the White House on March 4. According to The Huffington Post, he told the players that he could have had his staffers make something else, but that he thought some good ol' "all American" fast food would be better. “Because I know you people very well,” he said.

Before that, Trump greeted the Clemson University football team at the White House on January 14 with Big Macs and more in honor of its victory at the 2018 College Football Playoffs. He insisted at the time that he did the best he could, considering a government shutdown over funding for his border wall affected his staff, but people were still seriously bothered. One Clemson athlete was even apparently caught on video saying that he thought the meal was a joke, and others in the Twitterverse were just as perplexed. Elite Daily reached out to the White House for comment at the time, but did not hear back.

With that, it looks to me like Trump may indeed be starting his own tradition at the White House, so there's that. Get ready to dig in.