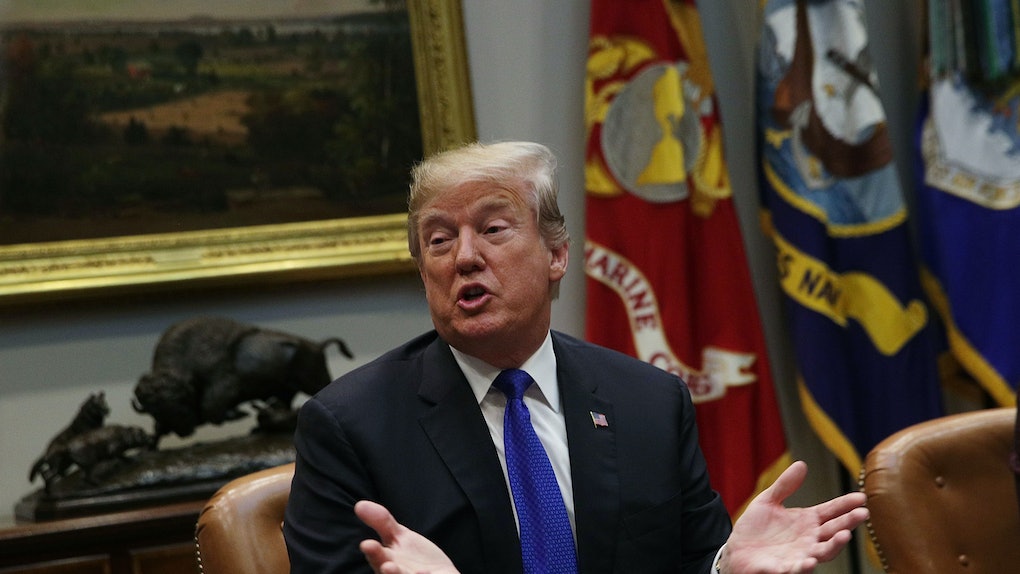 Why Does Donald Trump Eat McDonald's So Often? We’re Rolling Our Eyes

It's no secret that Donald Trump has been known to delight in a fast food chain a time or two, especially McDonald's. However, apparently it's not to feel that warmth from those luminescent golden arches or for the french fires. So why does Donald Trump eat so much McDonald's? Hold on tight, because allegedly this diva has a fear of being poisoned. OK, dude.

According to American journalist Michael Wolff's upcoming book Fire and Fury: Inside the Trump White House, POTUS prefers fast food meals over others because of his fear of being poisoned. He reportedly likes fast food for its anonymity, as the food is pre-made without knowing or caring who it's for. “He had a longtime fear of being poisoned, one reason why he liked to eat at McDonald’s, nobody knew he was coming and the food was safely premade," Wolff wrote.

Trump's love of fast food has been a popular topic among ex-campaigners and members of his staff. According to two former aides, Trump's go-to McDonald's meal is “two Big Macs, two Fillet-O-Fish, and a chocolate malted," as former campaign manager Corey Lewandowski and top aide David Bossie noted in their book Let Trump Be Trump, which followed his campaign trail. According to Lewandowski, Trump "never ate the bread, which is an important part." While this may be a nod to Trump's increased paranoia about people touching his food, to me it's all about skipping those carbs. So if readers are as stressed as I am about thinking about this calorie intake, at least that's a little assuring.

Trump even discussed the beloved fast food chain, and perhaps gave us a glimpse into his reported paranoia, in a 2016 interview with Anderson Cooper. Trump detailed the importance of a good burger, because clearly this is the political world we're living in now.

"One bad hamburger, you can destroy McDonald's. One bad hamburger and you take Wendy's and all these other places and they're out of business," Trump told Cooper. "I like cleanliness, and I think you're better off going there than maybe some place that you have no idea where the food is coming from."

Well, one could also argue that one bad political decision could destroy the free world, but we'll just set that aside for now.

So, a few things.

First of all, this isn't an Agatha Christie novel. In real life, poisonings aren't necessarily a popular or easy way to harm someone. Yes, famous fatal poisonings have happened in the past, but if Trump reportedly fears an assassination attempt via poisoning? We might suggest a little bit of a reality check.

On another note, perhaps this fast food indulgence serves as a little peace of mind for the president. Maybe it's his version of some much needed comfort food whilst fighting with on-off again bestie Steve Bannon. Whatever the reason behind this supposed bizarre fear, this is just one of the many aspects of Trump's paranoid personality, according to Wolff's book.

Wolff also detailed that POTUS allegedly is not a fan of any form of contact with his belongings, which would be fine if it wasn't taken to such extreme measures. According to the book, White House staff isn't to touch any belongings in his bedroom, "especially his toothbrush." In addition, apparently even Trump's clothes are off limits to the housekeeping staff.

“He ­reprimanded the housekeeping staff for picking up his shirt from the floor,” wrote Wolff. He went on to report that Trump allegedly told the staff, “If my shirt is on the floor, it’s because I want it on the floor."

All right, keep your shirts on the floor and burgers in your hands. You do you, boo.