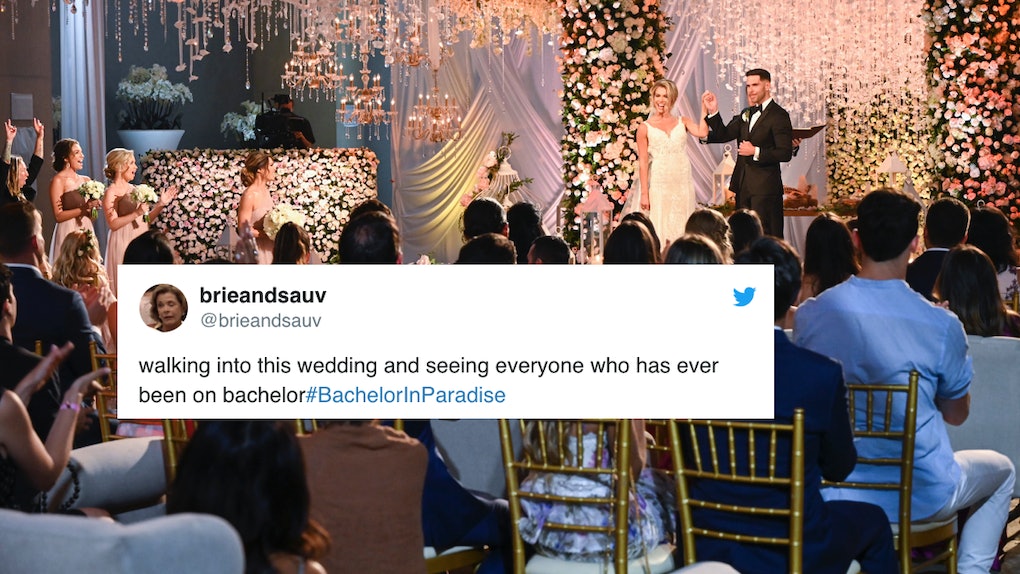 It might be easy to forget in the middle of all the fighting, tears, and scenes of John Paul Jones choking on his food, but Bachelor in Paradise is really all about couples finding true love. The end goal is to get engaged, and this week the Season 6 cast got to see an example of what they hopefully have to look forward to in the future. Everyone left the resort during the Aug. 27 episode for a very special occasion: The wedding of Chris Randone and Krystal Nielson, who got engaged at the end of Bachelor in Paradise Season 5. These tweets about Chris and Krystal's Bachelor in Paradise wedding are filled with the Bachelor Nation spirit.

Chris and Krystal had a nearly drama-free courtship on Paradise, so it made perfect sense when Chris proposed during the season finale. Before they got married, they made sure to have some important talks and strengthen their bond. Chris explained to ET:

We finally dug deep and had these deep-rooted conversations that finally allowed us to feel stable and that allowed us to go ahead and really identify the importance of understanding one another.

Those feelings about Chris and Krystal's deep connection were present at their beautiful wedding. Chris said, "This wedding should inspire anyone in Paradise, that love can find you at any moment."

Chris and Krystal's wedding was basically a who's who of Bachelor Nation alums. Nicole Lopez-Alvar said it felt like "a class reunion" with all different grade levels, which seems like a perfect description of the event.

Chris and Krystal walked down the aisle to a Matt Stell singing a live rendition of his song "Prayed for You." But a lot of fans thought that Jed Wyatt, the resident musician of the recent season of The Bachelorette, should have shown up with his guitar.

Chris Harrison officiated the wedding, which makes perfect sense since he already watches over all Bachelor Nation romances as host and producer. Fans thought it was really special that he was there to give his official blessing to Chris and Krystal.

But the wedding wasn't only happy moments. John Paul Jones spent much of the event stewing over the fact that Tayshia Adams essentially stopped dating him so she could pursue Derek Peth. He said he felt upset about how Derek treats women, and so he confronted him about his intentions with Tayshia. JPJ told Derek he doesn't think he's there for the right reasons and he got so riled up about it that he made a pretty big scene.

Luckily, the fight got interrupted when Chris and Krystal announced it was time for the reception. It was pretty exclusive party, since only some of the Season 6 Bachelor in Paradise cast got to attend.

Chris and Krystal's wedding was a true Bachelor Nation affair: It was a celebration of love that was sprinkled with a hefty heaping of drama.