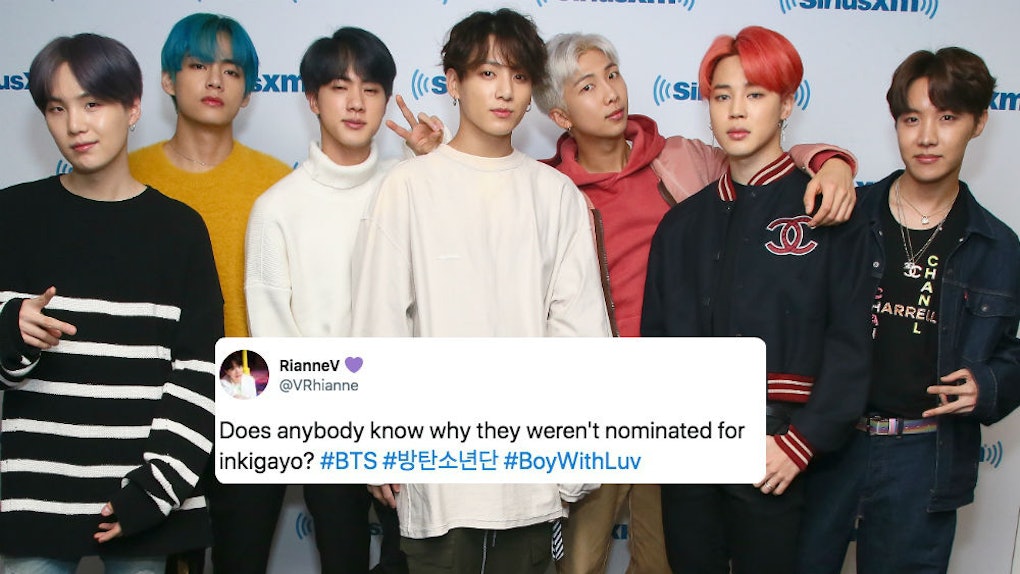 BTS ARMYs are nothing if not committed to defending their favorite band's honor. BTS appeared on the popular Korean music program SBS Inkigayo on Sunday, April 21, to perform two of their new songs off Map of the Soul: Persona, "Boy With Luv" and "Dionysus." On top of airing live performances by K-Pop's biggest stars, Inkigayo also has a chart system where a winner is announced at the end of every episode (think TRL), and K-Pop fans from every fandom are always rooting for their faves to win, or even just place, on the program. It goes without saying BTS fans were surprised with the results on April 21's episode, because they just weren't included. These tweets about BTS' Inkigayo snub seemingly point put an unfair anomaly in Inkigayo's ranking criteria, and BTS fans want answers. Elite Daily reached out to SBS for comment on the controversy surrounding BTS' omission from Inkigayo's April 21 chart, but did not hear back by the time of publication.

Here's a drive-by of what went down on April 21's episode of Inkigayo. At the end of the episode, after BTS delivered their performances, fans watched with anticipation to learn the week's chart results. On air, it was announced that BLACKPINK's "Kill This Love" came in first, BOL4’s “Bom” was second, and Chen's "Beautiful Goodbye" was third.

Check out the moment the top three were announced below:

At first glance, it might be hard to see what ARMYs are up in arms about. At least, I didn't see the big deal at first. BLACKPINK is immensely popular and it's not unreasonable that they'd take first place on any music show. I even made a Google Spreadsheet to compare this year's first-place winners and did the math: Usually, songs don't win first place until at least about two weeks after the song's release, which meant one could reason that BTS would win first place on the April 28 broadcast of the show.

But eagle-eyed fans were looking even closer than I was. The BTS ARMY's complaint didn't stem from the fact that "Boy With Luv" didn't win on April 21, but that it wasn't nominated at all.

Korean news outlet Dispatch reached out to an Inkigayo representative about BTS' omission, and according to a translation by Twitter user @modooborahae, the rep had this to say: "BTS’s song did not fall under the 3rd week of April. It will be reflected in next week’s chart."

That explanation didn't hold water with Dispatch or fans, because looking deeper into Inkigayo's past charts, an anomaly in the results seemingly appears — especially when you look at the few songs that were able to chart on the overall rankings one week after release.

Dispatch noticed that two songs with the same release timeline as BTS' "Boy With Luv" managed to chart on Inkigayo's Top 30 charts one week after release.

Similarly, BTS' "Boy With Luv" was released on April 12 at 6 p.m., nine days before their April 21 appearance on Inkigayo. That's the same exact timeline as Taeyeon's "Four Seasons" and virtually the same timeline as BLACKPINK's "Kill This Love" ("Kill This Love" was released earlier than "Boy With Luv," since it dropped at midnight KST). And yet, BTS was nowhere to be seen on April 21's chart.

Dispatch pressed the Inkigayo rep on this, to which they responded, "The formula for charting is very complicated. In BTS’s case, there was a part that didn’t meet the criteria (while calculating the score). The reason why the other singer entered the chart is because they met all the criteria."

Of course, the BTS ARMY was not satisfied with that answer either, because what criteria? According to SBS Inkigayo's website, the weekly music charts are calculated based on digital sales (55%), YouTube views (30%), pre-show voting (5%), TV/radio play (10%), and physical sales (10%).

BLACKPINK are a massive and incredibly successful K-Pop group in their own right. Their music video for "Kill This Love" broke Ariana Grande's record for most views in 24 hours when it blew "Thank U, Next"'s view count out of the water with a whopping 56.7 million views. It went on to break the record for the fastest video to hit 100 million views, hitting the milestone in just 62 hours. It makes total sense that the girls were able to burst onto the chart with "Kill This Luv" one week after the song's release at No. 4.

But ARMYs pointed out that "Boy With Luv"'s first-week performance outpaced that of "Kill This Luv"'s. The video broke both of BLACKPINK's records, racking up 78 million views in 24 hours and hitting 100 million views in just under 38 hours.

Considering YouTube views is a huge chunk of what plays into Inkigayo's ranking, and BLACKPINK and BTS' similarly impressive YouTube performance, it's understandably hard for ARMYs to understand what criteria BTS didn't meet, exactly.

When pressed by Dispatch on the exact criteria BTS didn't meet, Inkigayo would not disclose that information.

It was when Dispatch pointed out that BTS had won first place on similar music shows, like Music Bank on April 19 and Music Core on April 20 (though, those shows do have somewhat different criteria), that the Inkigayo rep seemed to hint that BTS was left off that week's nominations, not because of some technicality with release timing, but because their inclusion would have been a disadvantage to other artists.

"There were parts that didn’t meet our criteria and standards," the rep said, according to @modooborahae's translation. "BTS’ entry in the chart would’ve been unfair (for the other teams)." They added, "There were parts that did not meet the criteria when the ranking was being calculated. It was decided that it was right to reflect it next week rather than this week."

Inkigayo's unwillingness to disclose what, exactly, knocked BTS out of consideration led fans to come to their own conclusions about what, to them, seemed like an arbitrary and unfair rule change.

And now fans are encouraging BTS to cancel Inkigayo from any future promo.

It seems like there's a lot of distrust between the ARMY and SBS Inkigayo over this whole seemingly inexplicable situation. The only upside here is that ARMYs can probably look forward to a win for BTS and "Boy With Luv" on April 28's episode of Inkigayo.

Plus, BTS is killing it on every other chart in existence (like, I'm pretty sure they're charting Top 10 on Pluto RN), so ARMYs aren't sweating this too, too much.