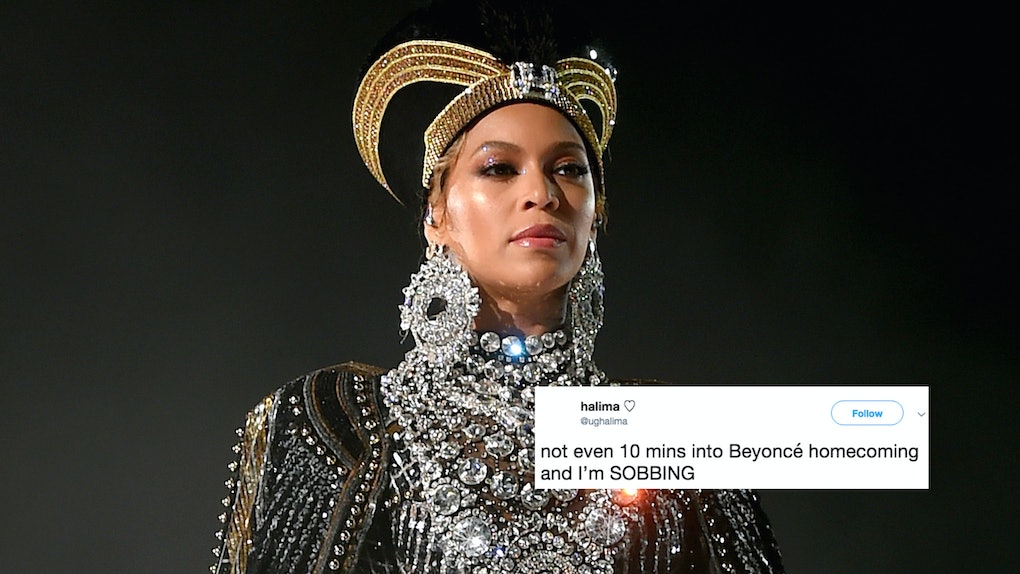 Beyoncé. Is. Back. The queen's highly anticipated Homecoming documentary finally dropped on Netflix on April 17. And not only did she give us a film... she gave us an album! With two new songs! We have been blessed by the Bey. Beyoncé's new film gives fans a behind-the-scenes look into the development of her iconic Coachella performance, now known as Beychella. Fans are finding a hell of a lot of inspiration in the film, as the tweets about Beyoncé's Homecoming documentary make clear.

The film dropped on Wednesday, April 17, in the middle of the night, along with the accompanying 40-song album. The Homecoming album is a live recording of Beychella, with two new songs added to the mix — "Before I Let Go," which is a cover of Frankie Beverly and Maze's song of the same name, and an official recording of "I Been On," which Bey performed live during her Coachella set but has never released as a song until now.

And trust, the BeyHive is emotional right now. Just look at the tweets about the film for confirmation.

What a day. What a time. What a film. What a woman.

This is the exact thing Beyoncé fans have been needing ever since Coachella 2018. Fans on Twitter have been thanking the queen for giving them the ability to relive the Beychella experience on repeat — something they've been trying to do for a year. Now they can, and they are bowing down.

In typical Bey fashion, Beyoncé dropped the album cover and the Homecoming trailer to her Instagram on April 17, presented with no comment.

And the film gives fans more than just an inside look into the development of Beychella.

It also gives us a look at the twins!!

Beyoncé had already revealed in the essay she penned for Vogue that she had an emergency C-section when giving birth to Rumi and Sir Carter, but the documentary reveals even more about the birth of the twins. Apparently, the reason for the C-section was because one of the babies' hearts stopped beating in the womb. The babies turned out just fine, thankfully, and the documentary gives lots of adorable footage of Bey, JAY-Z, Blue Ivy, Rumi, and Sir all together.

Homecoming also gives fans the Blue Ivy Carter content we all love to see. There's a moment where Blue is dancing with her mama and the rest of the cast, holding her own in the way only Beyoncé's daughter can. And there's even a moment where Blue Ivy sings "Lift Every Voice And Sing," and y'all... BLUE IVY CAN SING! I mean, what else did we expect? She is the offspring of two of music's biggest icons. Of course, she is the next coming of Beyoncé.

I'm just... so thankful to be alive during the time of Beyoncé. Long may she reign.