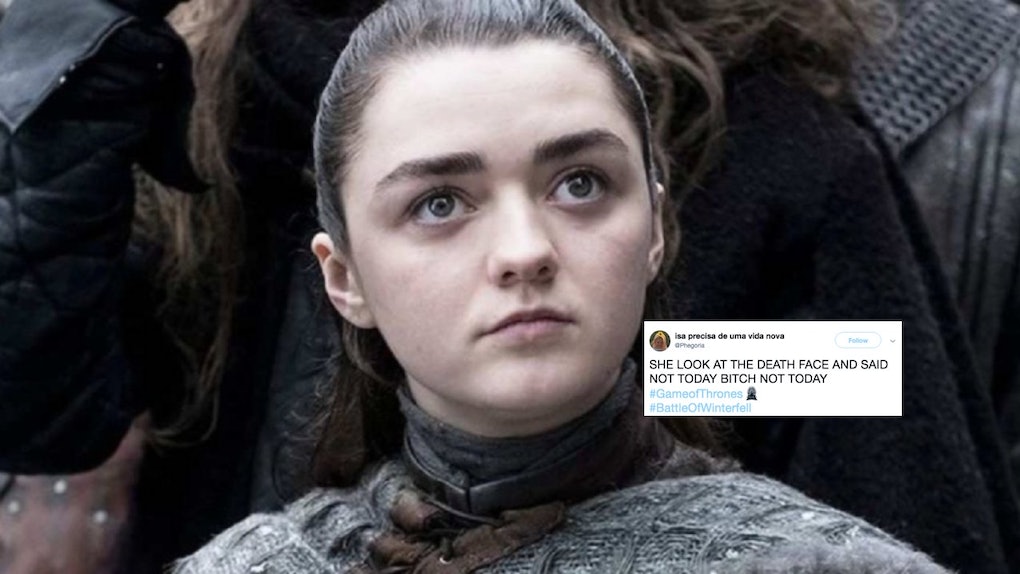 I have only two words to say after watching the Battle of Winterfell: ARYA. STARK. The entire Battle of Winterfell in Season 8 Episode 4 of Game of Thrones was an absolutely terrifying ride from start to finish. The fear was coming to a climax as the Night King slowly walked up to Bran Stark, clearly about to kill him, but NOPE! Arya Freaking Stark sneaks up behind the Night King and kills him. The tweets about Arya Stark killing the Night King on Game of Thrones show the internet freaking the f*ck out over this moment, and also grateful that they chose the right character to stan all this time.

Right from the get go, the Battle of Winterfell was a terrifying sight to see. The army of the dead approached in the middle of the night, leaving it basically impossible for the human army to see them as they got closer. Melisandre showed up to help by using her magic to set the Dothraki weapons on fire, which was helpful for about two minutes before the white walkers completely wiped all of them out. She helped again when the trenches needed to be lit by lighting them herself, but the white walkers (in a terrifyingly intelligent move) laid their cold bodies on the fire to put it out. Not great!

The entire battle showed all of the characters in their own individual moments of peril. Jon Snow got in a dragon fight with the Night King, Dany tried to kill the Night King with her dragon's fire, but it didn't work. She also ended up falling off of her dragon later in the episode and found herself having to pick up a sword and fight alongside Jorah, who died protecting her (RIP to a real one).

The dead bodies in the Stark crypt (you know, where all of the people not fighting — Sansa, Tyrion, children — were hiding) came crawling out of their tombs and killed some of those hiding in the crypt. Tyrion and Sansa decided to try and fight them off, assuming they'd be killed in the process.

Theon Greyjoy died protecting Bran, but it became clear that that wasn't going to happen. Bran thanked Theon for his protection, then the Night King killed Theon (RIP to another real one). Seconds before the Night King was about to kill Bran... ARYA MOTHERF*CKING STARK KILLED THE NIGHT KING!

All hope really seemed lost during every single second of this episode up until this moment. Melisandre had spoken to Arya earlier in the episode to drop an ominous hint that Arya clearly understood, but viewers couldn't figure out the importance of.

Melisandre quoted the man who taught her how to use a sword in Season 1 and said, "What do we say to the God of Death?"

"Not today," Arya said back. Not today, Night King! Not! To! Day! Seconds before the Night King was about to kill Bran (he really takes his damn time, doesn't he?), Arya jumped up behind him. He caught her and held her up by her neck, but she simply dropped the knife out of her one hand and into her lower one, then stabbed the Night King in the stomach, killing the entire army of the dead with him.

All I have to say now is... ALL HAIL QUEEN ARYA STARK, SAVIOR OF THE SEVEN KINGDOMS, NIGHT KING SLAYER, A GIRL WITH A NAME THAT WILL BE REMEMBERED FOREVER. We. Freaking. Stan.

More like this
This 2021 'Game Of Thrones' Season 8 Trailer Is So Confusing... & So Good
By Ani Bundel
These Tweets About Regé-Jean Page Leaving 'Bridgerton' Are Royal Bummers
By Cianna Garrison
These 'The Nevers' Theories About That Flying Ship Are Absolutely Bonkers
By Ani Bundel
Stay up to date