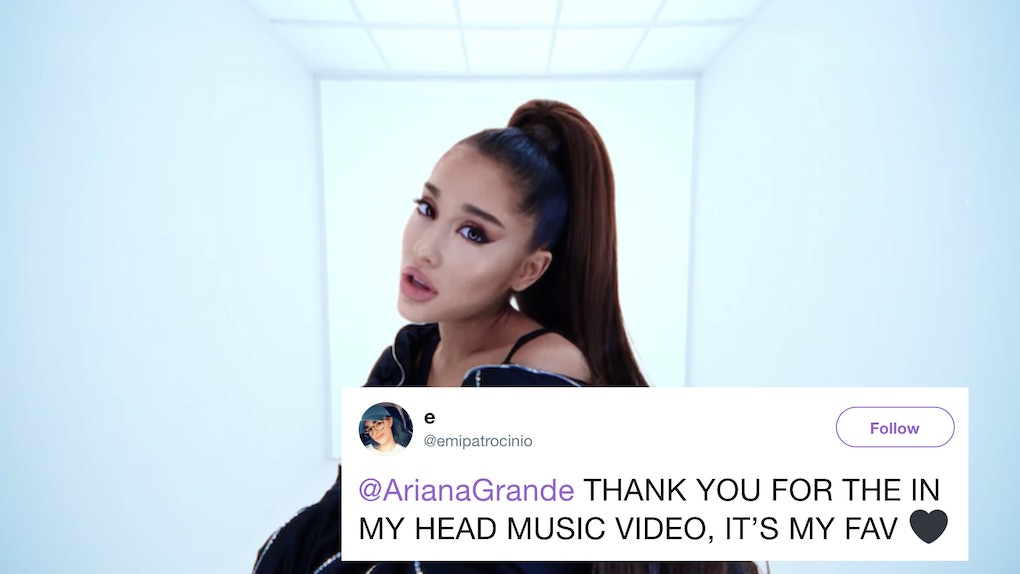 Happy Monday to Ariana Grande and nobody else! Queen Ari's latest music video just dropped on Monday, July 9, and fans are soaking it up. The tweets about Ariana Grande's "In My Head" music video show Arianators stan for this trippy delight, which was released in collaboration with Vogue. Once you watch it, you'll totally understand why. The fashion is major, honey. Grande's signature knee-high boots, oversized jacket, and slick ponytail all costar with Ari herself. Reminder: God is a woman.

I mean, let's be real. The video is a visual phenomenon. Special effects, green screens, and extreme lighting give it an eery, heightened effect. Grande's eyes are coming at ya, people. While her previous iconic music videos for songs like "God Is A Woman," "Thank U, Next," and "Break Up With Your Girlfriend, I'm Bored" might have featured heavier production, this video delivers just as much impact. What it lacks in back up dancers, costume changes, and set design, it totally makes up for in latex and lashes. Grande's entire demeanor is piercing and oh-so-cool. I don't know what her inspiration was, but I'll take it.

Treat yourself to this tasty three-and-a-half-minute snack.

It seems every time Grande swings, she connects. Just look at the feedback:

Here's the fun thing about Ariana Grande — whatever the F she feels like doing will undoubtedly turn to gold. Be it a new track, concert, music video, or tweet, anything coming from Ariana Grande is going to be authentically honest and organically fierce. Grande touched on her most recent bodies of work (Sweetener and Thank U, Next, respectively) in her interview with Vogue, acknowledging that while she is a pop singer, her music is truly so much more than that.

"It’s hard to sing songs that are about wounds that are so fresh," she explained. "It’s fun, it’s pop music, and I’m not trying to make it sound like anything that it’s not, but these songs to me really do represent some heavy sh*t."

Initially, Grande tweeted out that the song's lyrics were about “being in love w a version of somebody you've created in your head. falling for someone that they are not.” Fans whipped themselves into a frenzy trying to get to the bottom of which relationship and ex-boyfriend Grande might be referring to. To be clear, the song appeared shortly after her whirlwind romance and engagement to Saturday Night Live star Pete Davidson. However, many people still link the lyrics call back to Grande's late ex-boyfriend, Malcolm McCormick, aka Mac Miller.

The iconic chorus repeats the words:

Fortunately for fans, the music video walks just the right line between intense and fascinating that makes it super easy to watch on repeat.

More like this
These Tweets About Amy Adams' 'Woman In The Window' Are Brutal
By Abby Monteil
These Tweets About Beyoncé On Netflix's 'Selena: The Series' Are Too Much
By Dylan Kickham
Who Is SB19? The Filipino Pop Group Is Going To Steal Your Heart
By Sydney N. Sweeney
Stay up to date