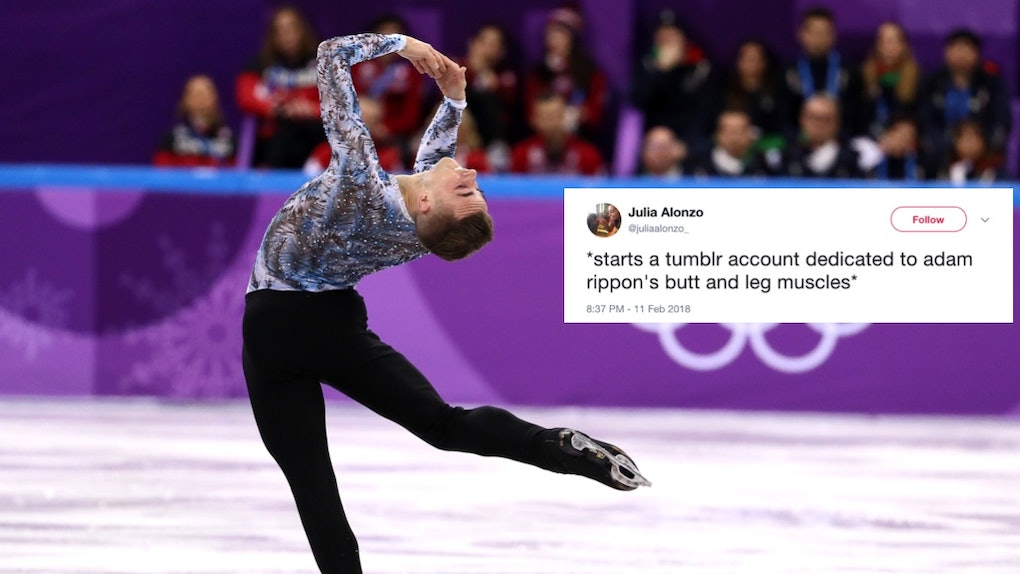 Adam Rippon is probably having a longer week than you are. The absolute slayer of ice skating for the men's Olympic figure skating team had to deal with a slight misunderstanding about his anatomy to the collective world, and even though it might be pretty aggravating for the young athlete to talk about anything but his incredible performance during the Olympics, these tweets about Adam Rippon's butt pads are so funny that he's probably laughing, too.

For anyone who doesn't watch Olympic figure skating, you might want to consider re-thinking your priorities. Figure skating is the cream of the Olympic crop, filled with sparkles and athleticism and wildly complex moves that make you hold your breath and wonder how these people can be superhuman on ice, when you can barely walk down the street without tripping.

Either way, here's what you missed: On Monday, Feb. 12, Adam Rippon, one of the Team USA favorites for figure skating, delivered a nearly flawless free skate program, then promptly got roasted (in a friendly way) on social media for how his butt looks — because that's what's important to people, apparently.

Basically, Adam Rippon has such a nice booty that everyone thought he was wearing butt pads, and the Twitterverse exploded with commentary.

First of all, let's get one thing straight here: Adam Rippon was not wearing a butt pad during his most recent skating routine, nor has he ever worn one while performing. But apparently, this has been a question that's plagued Rippon long before the Winter Olympics began. He actually tweeted about it in December 2017:

Rippon further clarified the extent of the butt pad conspiracy theories in an interview with Access Hollywood: "It is all natural, yes," he explained. He continued,

One time, someone said, "Oh you skated so well, but like, were the butt pads necessary?" And I was like, "Hmm, alright, I’ll let it slide." And then somebody tried to defend me, and they were like, "Well, they’re probably there for safety!" And I was like, "Oh boy, we need to clarify something."

Despite the full disclosure, Rippon's butt continues to be a point of discussion on Twitter.

It's not totally surprising for Rippon to have such a toned, fabulous butt. Figure skating is all about leg and glute muscles, since you need them to propel you into the air.

This can lead to what's called the "skater's butt," a term coined by retired figure skater and two-time Olympic medalist Michelle Kwan (bow down to the queen), in reference to the strong, curvaceous booty you can get from training in the sport.

And FYI: Butt pads, also known as crash pads, really aren't common in performance for any figure skater. While some skaters might use them in practice as a cushion for when they fall, it's not even that common in that context. People might simply think that butt pads are prevalent if they don't realize that "skater's butt" is a real thing. Bottom line: Ribbon's derrière probably comes down to a good combination of genetics and his intensive training routine.

TBH, when it comes to an athlete as impressive as Adam Rippon, you'd think there might be more to talk about besides his butt — like, for instance, the fact that he's the first openly gay American competitor in his sport to qualify for the Winter Olympics. Seems like something we might want to focus on instead, no?

Luckily, Rippon didn't seem to be bothered by any of this. In fact, he seems to find the whole thing pretty funny. In an interview with the sports site Deadspin, the 28-year-old Olympian said,

I just thought it was funny. I just wrote this tweet to just set the record straight that I’m not wearing pads. I just have a fat ass.

Maybe Rippon's butt isn't the most important thing we should be talking about, but it's pretty damn funny the way people have reacted, and Rippon seems to be taking it all in stride. Best of luck in the rest of the Winter Games, Adam!

More like this
Can I Exercise After A Flu Shot? Experts Recommend Listening To Your Body Post Vaccine
By Georgina Berbari
These Tweets About “Disaster Girl” & Her $500K NFT Are Hype For Her Reward
By Cianna Garrison
These Tweets About The Bidens' Photo With The Carters Ask A LOT Of Questions
By Rhyma Castillo
Stay up to date