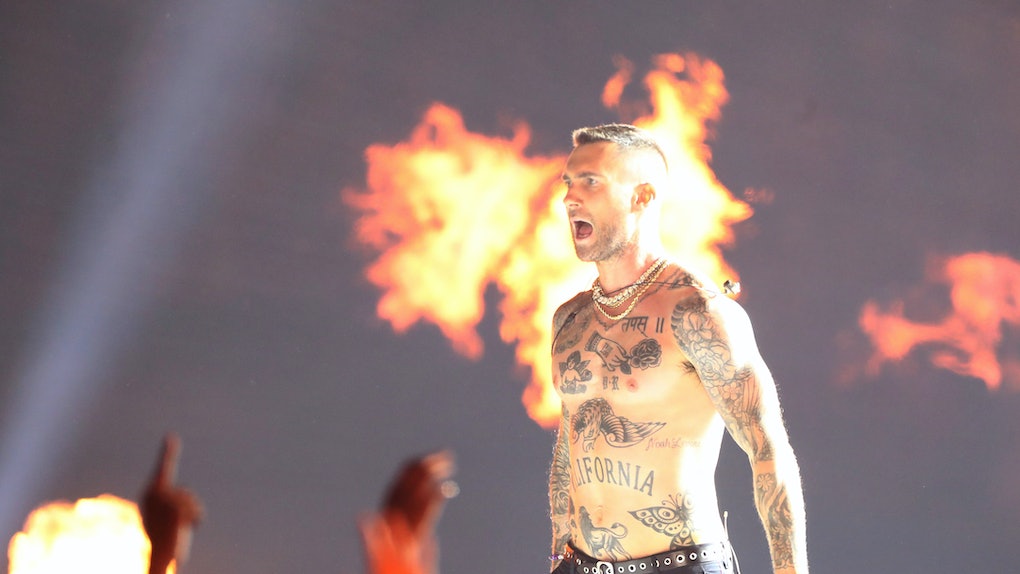 The Super Bowl Halftime Show was mostly Maroon 5, with a few special guest appearances from local Atlanta residents like Big Boi and Travis Scott. Lead singer Adam Levine covered everything from the band's early Song About Jane album through to "Moves Like Jagger," when he took his shirt off. These tweets about Adam Levine shirtless suggest the slow strip Levine did over the course of his performance was worth it, at least to the viewers who liked that sort of thing.

Though Maroon 5 has had a career spanning more than a decade, their earlier stuff, when they were more of a four-piece rock band, isn't as mainstream. While their classics like "She Will Be Loved" and "This Love" are classics for sure, their later, more late-70s, pop-based material from the period after Levine became a household name on The Voice are the songs people recognize.

Of those songs, the one everyone knows is "Moves like Jagger," which is basically the song The BeeGees never wrote. Naturally, this was the song that came at the end of the set, and Levine, who had slowly been losing articles of clothing from a button down to a tee shirt to a tank top finally went whole-hog and took it all off. Well, from the waist up anyway.

The crowd at home may have seen Adam Levine on The Voice every Monday and Tuesday for the last ten years, but they don't usually see him like this. Levine is always properly dressed, with perhaps a sleeve or two jauntily rolled up, exposing standard-issue rock-and-roller tattoos. Exposing his chest like this did not only give the audience an eyeful but also let everyone know those tattoos go all the way up. And across. And down again. I won't ask how far down.

But while the majority of the crowd at home approved of this half-naked Adam Levine, a few were a little bitter over another partially naked moment that nearly brought the whole Super Bowl (and an artists' career) to a halt.

Some will never let the Janet Jackson injustice go. (Nor should they. Make every Super Bowl Janet Jackson Appreciation Day.) But when it came to most of those watching, the sight of Adam Levine without a shirt was worth the price of admission, even if a few were taken aback by it.

But even if it was a surprise, it was a nice one, and well appreciated. Say what you will about Levine (and many do), there's no one out there who tries as hard as he does.

Unlike some of the judges on The Voice who come and go, or only stay for a few seasons before cycling out again, Levine is always there. He works hard to keep his band and his brand in the spotlight. This includes taking their music in a different direction when they recognized the rock band format was on the way out. This may be part of why so many give him flack, but I personally appreciate a rock star who works for it.

And that chest was worked.

Now, let's just see if he'll do it again on NBC.

More like this
These Thirsty Tweets About The Darkling From 'Shadow And Bone' Say It All
By Ani Bundel
These Tweets About The Weeknd & Ariana Grande's "Save Your Tears" Remix Are All About Their Fire Vocals
By Sydney N. Sweeney
These Tweets Comparing Billie Eilish's 'Happier Than Ever' & Ariana Grande's 'Sweetener' Covers Are A Lot
By Sydney N. Sweeney
Stay up to date