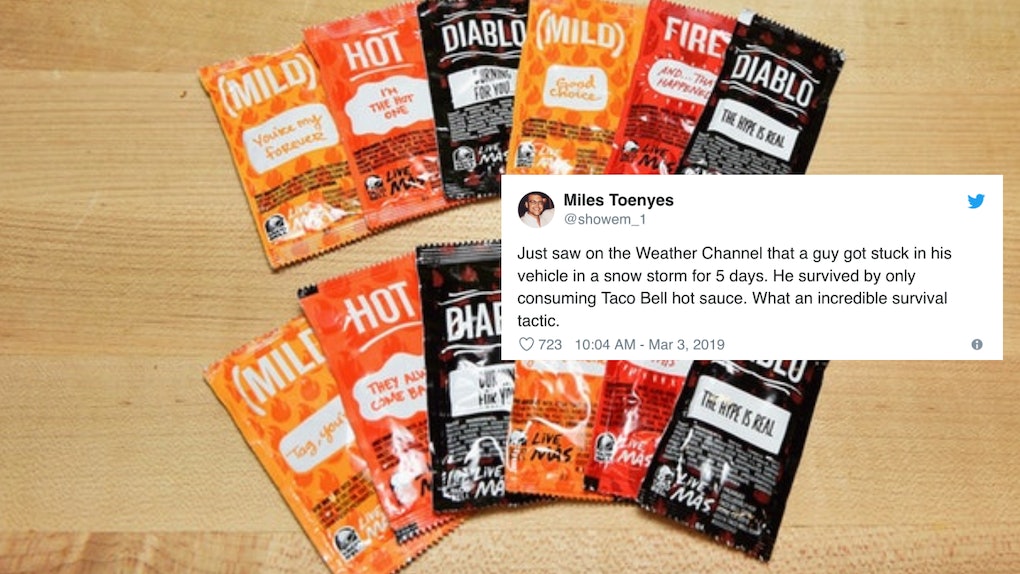 Do you ever wonder what you would do for survival if you were trapped in a car? On Friday, March 1, an Oregon man was apparently found in his car after being stranded for five days, per The Oregonian, and he claimed he survived by eating, wait for it... Taco Bell sauce packets. Impressed? Twitter seemed to be, too. Take a look at these tweets about a stranded man eating Taco Bell sauce packets to get a feel for why Twitter was so here for this fast food hero.

According to KATU 2, a CNN affiliate, a 36-year-old man named Jeremy Taylor survived being trapped in a snowbound vehicle for five days in central Oregon. Per the news station, Taylor got stuck on Forest Service Road 20 on Sunday, Feb. 24. After trying to walk out to safety on Monday, Feb. 25, Taylor retreated back to his car with his dog Ally, because the snow was too high to move. So, how did Taylor get by until being found on Friday, March 1? Per the news station, periodically starting his car and eating taco sauce packets did the trick.

Yep, Taylor apparently staved off starvation with those little packets of Taco Bell sauce you can grab at the fast food restaurant, specifically packets of Taco Bell Fire Sauce, according to a comment he shared on his Facebook page, per an AP report in The Oregonian. Before Friday, he was last seen at a gas station on Sunday, Feb. 24 in Sunriver, Oregon. When rescuers eventually found him, Taylor and his dog Ally, Sgt. William Bailey, the spokesman for the Deschutes County Sheriff's Office, said a search and rescue team member rode to him on a snow tractor after a snowmobiler alerted them to Taylor's whereabouts. According to the AP, Taylor and his dog were found in good health but were both "very hungry." Understandable. Taco Bell sauce can't work miracles.

People who read the story took to Twitter to share their reactions. Twitter user @showem_1 commented, "Just saw on the Weather Channel that a guy got stuck in his vehicle in a snow storm for [five] days. He survived by only consuming Taco Bell hot sauce. What an incredible survival tactic."

Another Twitter user, @kellanphelps11, noted, "I'm gonna stock up in the event I get stranded," and honestly same.

Other people on Twitter just as impressed by this unlikely story.

If you're already brainstorming Taco Bell-related tactics in case you become stranded, you can actually buy Taco Bell's hot sauce flavored tortilla chips and survive off food that's more sustainable than hot sauce packets alone. Although, I should make it clear that Taco Bell sauce is in no way a legitimate emergency kit, tasty as it may be. Still, you might want to stock up on the chips anyway, and they come in three flavors: Classic, Mild, and Fire, to reflect Taco Bell's hot sauce line. To take your "survival kit," aka ultimate snack session, to the next level, you can wear your Taco Bell-themed Mild, Medium, or Fire onesie (depending on your personal spice level) to keep warm and cozy in case of emergency. You remember them from the 2018 holiday collection, right?

Anyway, the next time you're debating a Taco Bell run, remember: The sauce packets might save your life one day, so just go for it (and by "save your life," I mean make any meal ever taste better).