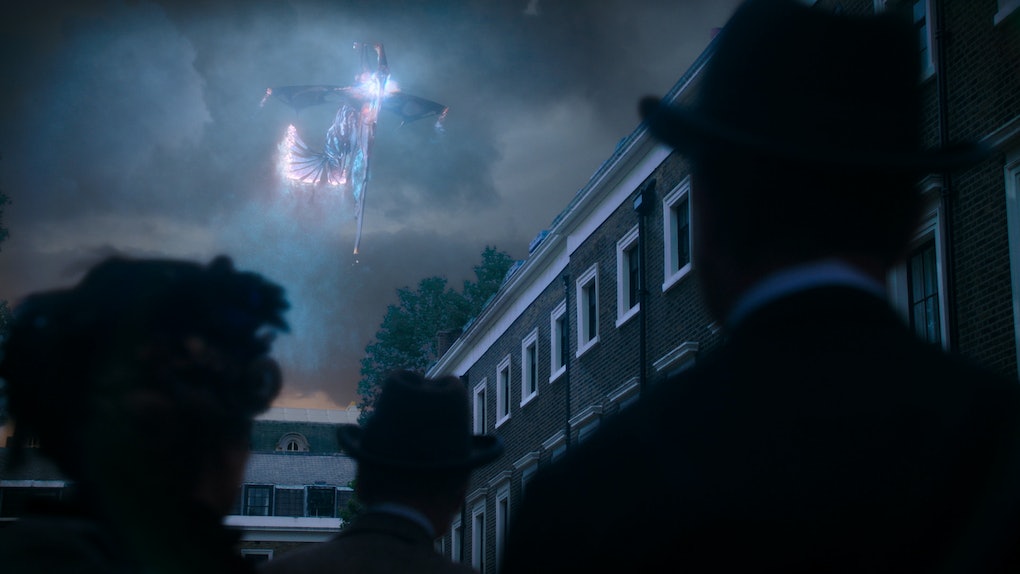 These 'The Nevers' Theories About That Flying Ship Are Absolutely Bonkers

The Nevers begins as a mystery. Three years after a cryptic event, hundreds of people, mainly women, have manifested abilities that no one can explain. From seeing into the future to genius-level inventions, all of Victorian London is changing due to these new powered people. But how did they come by these mutations? Who controlled the triggering event? These The Nevers theories about the flying ship that sailed over the city are taking everything into consideration.

Warning: Spoilers for The Nevers Episode 1 follow. When The Nevers opens, the series skips over what created these "Touched" people and brought about their abilities. A few people indirectly discuss it, like Lord Massen, who describes it as an "attack." But it almost seems like most people have no idea anything happened. They went to bed one night and woke up the next day, and their fellow citizens had started mutating.

But as the series suggests in that opening scene, that's not what happened. It just that for those who weren't "Touched," the incident was immediately erased from their minds.

What they don't remember is that out of the storm clouds gathered over the city, a beautiful clockwork ship descended from the sky. Powered by an energy ball as bright as the sun, this birdlike, fish-shaped vehicle (which did not seem to have any passengers aboard) flew over London. As it did, people fainted and fell to their knees. As it took back off towards the heavens, the tail suddenly let loose trails of gas, with tiny iridescent particles raining down.

So, what was that ship? And who dispersed those particles?

These Mutations Are Scientifically Explainable

The Nevers has a lot of faith-versus-science undertones in the opening episode. Someone like Myrtle is accused of speaking in tongues, witchcraft, and satanism. Meanwhile, Amalia True, who takes in "Touched" girls, sees them as people like any other, just with different abilities.

Notably, several characters have scientifically bent talents enhanced by their abilities to a point where one might call it magic. Penance was already an inventor; now, she's inventing at genius levels. Dr. Cousens was already a talented surgeon; now, he heals with his hands instead of tools.

That suggests that perhaps there's a scientific explanation for all this. After all, as writer Arthur C. Clarke so famously said, "Any sufficiently advanced technology is indistinguishable from magic."

These Powers Are Derived From Time Travel

So, where could sufficiently advanced technology come from? Obviously, the future! The ability to travel through time and change the world would be one plausible explanation. It also jives with Amalia's capabilities; she can see through time to future events. And it would explain why someone like Penance can invent cars decades before they existed.

If the ship did not sail from the future, then the other obvious answer is aliens. It is not always a common trope in period science fiction. The ship looked a lot like the alien technology seen in shows from the same creator, like Firefly. And it would set The Nevers apart to follow in the footsteps of comic book explanations for powered people, that technologically advanced aliens came here and messed with humanity for fun and profit.

But Could It Be Religious In Nature?

As noted above, a lot of the show is couched in religious terms. That's partly due to the time and the place. Victorian London was obsessed with religion, the afterlife, death, etc. Moreover, as Massern noted, the Touched phenomenon is only limited to London. If it were aliens or time travelers, wouldn't it have happened worldwide? Why just London? Unless there's a religious reason to single out the believers of one city across the world.

The Nevers airs on HBO Sundays at 9 p.m. ET, and streams on HBO Max starting the next day.