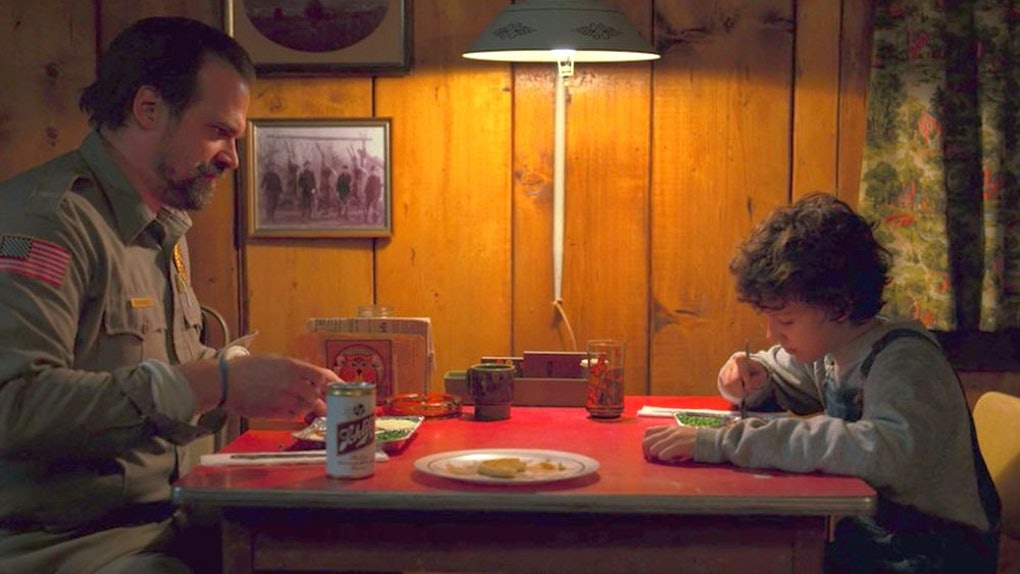 Last year, Netflix celebrated Halloween with the release of Stranger Things Season 2, the follow-up season to their unexpected hit of the summer before. The show has been described as "Stephen King, directed by Steven Spielberg," which is pretty accurate. Season 3 sadly won't be back this fall, as Netflix has announced it will arrive in the summer of 2019. But this doesn't mean fans can't make their own Stranger Things Halloween celebration. These Stranger Things-themed Halloween recipes are the perfect food to feed a crew of hungry Dungeons & Dragons players at any party, demo-dogs or not.

Pinterest is a veritable feast of Stranger Things party decor ideas, and DIY costume plans to show up as Eleven, Nancy, and Steve. But the best part of the show, for my money, is the 1980s-era food the characters are stuck eating. The 80s were an era where Reese's Pieces first arrived, Nerds were everywhere, and Skittles invited everyone to taste the rainbow. But Stranger Things is more than a candy fest (even though everyone will assume 3 Musketeers are on the menu). Below, there are no less than six YouTube recipes to follow, which will create a spread fit for Demogorgon fighters, as well as their parents.

For a Stranger Things appetizer for party goers, the answer is obviously mini plates of triple-decker Eggo waffles for everyone at the party. Like the Eggos themselves from Season 1, this dish, which Hopper creates to make it up to Eleven for being a crappy dad, was an instant iconic classic, recognizable to all fans.

Looking for a more savory dish to set out for partygoers to eat? Try these ramekins of what Netflix calls "French Onion Barb." Yes, you're basically making french onion soup (the tendrils of onions represent the Demogorgon's tentacles), but it's a tasty dish that's easy to make, and you get to make Barb's face out of the pastry, screaming for eternity for justice.

No party is complete without a cocktail, and the most sensible choice is to go with a drink Eleven would love, created from her favorite foods. Thankfully, it's not just Eggos. There's vodka (or a virgin substitute), oranges, and syrup. It's breakfast in a drink!

Everything cannot be Eggos. Psychic children cannot live on fast food alone. Hopper made this clear to Eleven last year when she moved in. Thankfully, there's the grown-up version of waffles to create the ultimate party pattern dish: chicken and waffles. But of course it's gotta be upside down because, in Hawkins, Indiana, everything is.

Every party is better with pie. Pie cannot be good or evil, it can only be molded into shape. That's why Netflix put out a recipe which is basically a fruit pie but styled to look like you're staring down into a Demogorgon's heart. Or actually, their face, as Mews can probably attest.

Finally, for dessert, there are cupcakes! But not just any sort of cupcakes Mike's mom would make for the Middle School bake fair, or Will Byers' mom would buy from the store. These are cupcakes you use to communicate with those in another dimension, covered in Christmas lights. So be careful before you bite in.