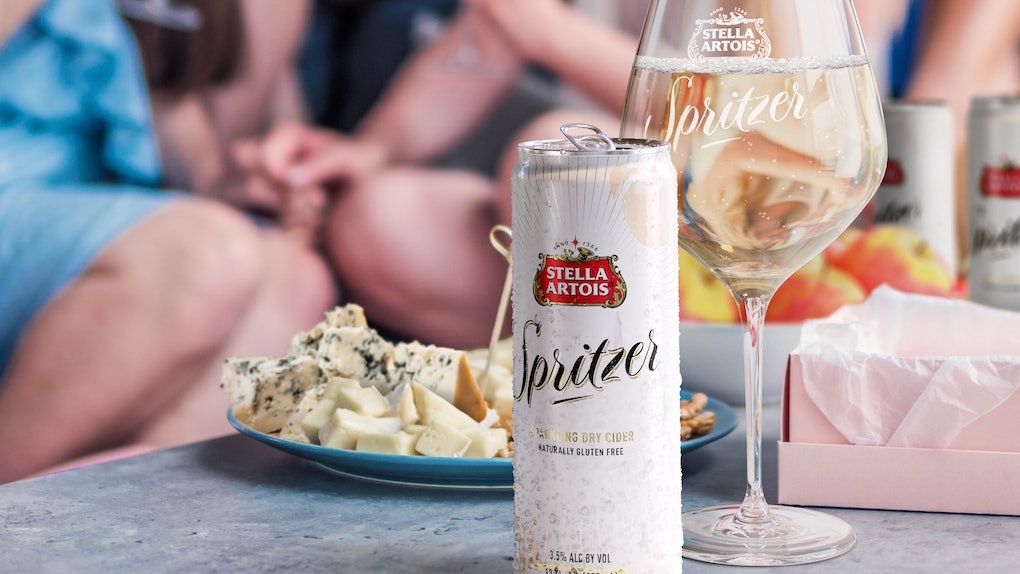 Right now, most of my friends are looking forward to St. Patrick's Day, while others are getting psyched for March Madness. I, however, am looking forward to hosting 2019's very first rooftop darty (better known as a "daytime party"). The sun will be shining, the birds will be singing their sassy little hearts out, and most importantly, I'll have an ice cold drink in my hand. And if you, too, are preparing yourself for this year's first springtime gathering on your apartment building's rooftop (because I definitely am), these Stella Artois Spritzers look like a guaranteed good time.

At some point in your 20-something years of life, you have most likely cracked open a Stella or two. Maybe it was one of their crispy wheat beers, or it could have simply been a hearty AF fall cider. Either way, you probably haven't yet tried Stella Artois' newest addition to their lineup (which is the first official addition since 2013!) called the Stella Artois Spritzer. It just came out in February, 2019, and I don't know about you, but it's about to quench the thirst of all my parched rooftop guests (myself included).

Stella Artois' brand new canned beverage, the Stella Artois Spritzer, is effervescent, dry, and fruity, combining notes of crisp apples and floral hibiscus. It's bubbly, refreshing, and relatively light, containing only 3.5 percent ABV. Before you dive head first into that six pack, however, the brand recommends keeping the 12-ounce sleek Spritzer cans chilled. They also suggest mixing them into cocktails, or classily sipping them out of a wine glass all on their own because #FancyLiving.

Stella Artois also made a point to highlight the fact that Stella Spritzers are quite versatile. In fact, they pair impeccably with an apple walnut salad, maybe a little romano cheese, a few slices prosciutto, or even a smidge of apricot jam. TBH, all of that sounds like a delish nosh lineup. I'm writing this down in my party-planning journal as we speak.

Some lucky customers even got a a chance to try the Stella Artois Spritzer already. According to the brand, Anheuser-Busch actually tested the drink throughout Washington D.C. last year in October 2018. Thankfully, for fans of hard cider, it proved to be a huge hit among the cider lovers, wine drinkers, and beer aficionados who decided to give it a shot, so the brand ended up launching the drink nationwide last month. Now, you can find the Stella Spritzers in any almost local retailer (and even at bars) across the U.S. So cheers to that!

Everybody knows that a party isn't truly a party without a little beer/cider/wine action, and Stella Spritzers look like the RTD canned beverage that almost any fiesta out there could definitely use. So while you're busy enjoying all of your cold weather March festivities, I'll be in the process of planning that very first warm weather shindig of the year. Oh, and you'd better believe Stella Spritzers are at the top of my shopping list.