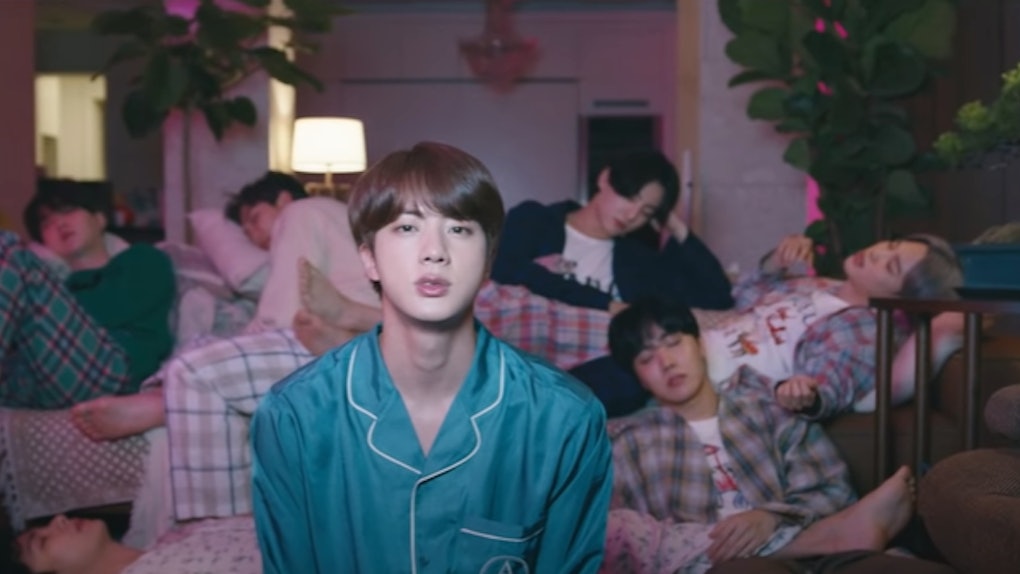 ARMYs have been keeping BTS' "Life Goes On" music video on loop ever since its midnight release on Friday, Nov. 20. It seems every time fans watch the clip, they find something new to love. These small details in BTS' "Life Goes On" video are so meaningful and really highlight the message behind the song.

The overall theme of the visual is how everyone's lives changed due to the worldwide coronavirus pandemic. For most of 2020, people have been quarantining indoors for their safety, forcing them to be apart from friends or family for months. BTS' "Life Goes On" video perfectly represents the feeling of the being cut off from the world because throughout the clip, the members reminisce about life before the pandemic when they were free to do anything. They try to keep themselves entertained in their dorm by playing video games and watching TV, but that itching feeling of wanting things to get back to normal still lingers at the back of their minds.

The track's nostalgic sound and hopeful lyrics only make the video even more emotional, as the guys sing, "Like an arrow in the blue sky/ Another day flying by/ On my pillow, on my table/ Yeah, life goes on."

The words were everything ARMYs needed to hear and seeing the message brought to life through the MV helped make fans feel so seen.

There were so many small details that really brought the MV together. For example, right at the start, BTS gives a nod to the changed world by having V take off his face mask once he got inside his car.

Then, near the 0:45 mark, RM is seen alone outside with his bike, which he had to dust off from not using it in so long. Fans thought it represented how people are staying indoors and limiting the places they go and people they see to keep each other safe.

The little scene of RM watering his bonsai plant at 1:07 also hit ARMYs in the feels, as the guys tried to find ways to keep themselves from getting bored.

Speaking of hobbies, Suga has been learning how to play the guitar lately, so of course, he included that in the video at 1:37 as well.

BTS having a campfire is one of their favorite things to do together as a group, so when fans saw them reminiscing about those memories at 1:46, they got so emotional.

The guys hugging each other throughout the video was also so sweet and put a smile on ARMYs' faces.

Jin facing the camera directly at 2:40 and then closing his eyes to remember the past sent ARMYs into their feelings again.

Finally, the scene at 2:50 where BTS performed in an empty stadium surrounded by ARMY lightsticks had fans sobbing.

All in all, BTS' music video is a masterpiece and fans will never get over it.