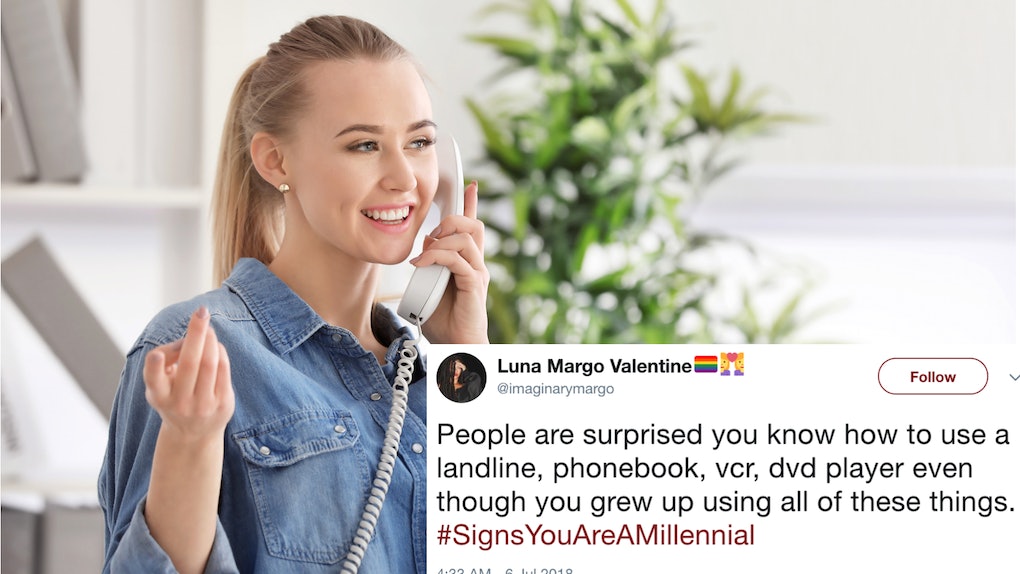 By definition, a millennial is someone who was born sometime between the early 1980s and the mid-1990s. You hear plenty of talk about the millennial generation in the news, and most of it is not too complimentary. I'm sure you've heard that millennials are the generation whose obsession with avocado toast prevents them from being homeowners. With cold, hard facts like that one out in the open (LOL), Twitter decided to reveal even more traits linked to millennials. These #SignsYouAreAMillennial tweets are hilarious, and they'll have you saying, "Same."

The #SignsYouAreAMillennial hashtag began trending on Twitter on Friday, July 6, and the tweets about the topic are totally relatable and funny AF. Millennials tend to get a bad rep from the way older generations talk about them. The words "lazy" and "entitled" are often tossed around as essentially given traits for anyone born into the millennial generation. Many millennials also take issue with the fact that people tend to mix up the millennial generation with the one after them: Generation Z, which is generally referred to as people born right after millennials through 2010. Thanks to Friday's trending hashtag, millennials have a chance to set the record straight about what makes someone a millennial.

Although, not every response is meant to argue against preconceived notions of the millennial generation.

Some of the tweets will simply give millennials a major dose of nostalgia.

Pixar movies are a part of you.

Hey, it's a "Wizarding World," and you're just living in it.

Raise your hand if you can relate to "student loan debt."

Dial-up internet was a tricky endeavor.

You know what "Be kind, please rewind" means, and you've looked up the pizza delivery number from the Yellow Pages.

You cleaned up all the pixelated poop, like any good digital pet owner would.

The #SignsYouAreAMillennial hashtag might make you want to laugh and cry at the same time.

Sending your BFFs memes in an Instagram Direct Message is how you show them that you care.

You also remember when your weekends weren't always so screen-based.

Millennials will never forget their afternoons spent with CatDog and Hey Arnold!

While the exact birth years for what constitutes a millennial can vary, some millennials were born as early as the the '80s. You won't stump them by asking if they know what a "pound sign" is.

You didn't see the full Titanic car scene until you were an adult.

You remember the exact moment you figured out how many rations you'd need to finally win The Oregon Trail.

When it came to free time in computer class, you either played The Oregon Trail or Math for the Real World.

You seriously question the direct correlation between buying avocado toast and your inability to buy a house.

Speaking of politics, many people in this generation want to change the world in a positive way. Again, the oldest millennials are 38 years old by now, so the prospect of seeing more millennials in office isn't ridiculous by any means.

The question of electing more millennials to public office came to national attention after 28-year-old Alexandria Ocasio-Cortez unseated longtime Democratic incumbent Rep. Joe Crowley in New York's 14th congressional district on June 26. Ocasio-Cortez calls herself a democratic socialist, and her platform includes issues like Medicare for all, an assault weapons ban, and mobilizing against climate change, per her campaign website.

Of course, not all millennials share the same political views, but the qualified members of this generation should not be discounted solely because of their perceived inexperience.

Now, you might wonder how I got to electing millennials to public office from reminiscing about dial-up internet. If the #SignsYouAreAMillennial hashtag did one thing on Friday, it was to show that this generation can both push back on the labels put on them by others while also looking back on memorable times of growing up as a '90s child. Hey, if you could take care of your Tamagotchi, then you're pretty much prepared for anything, right?