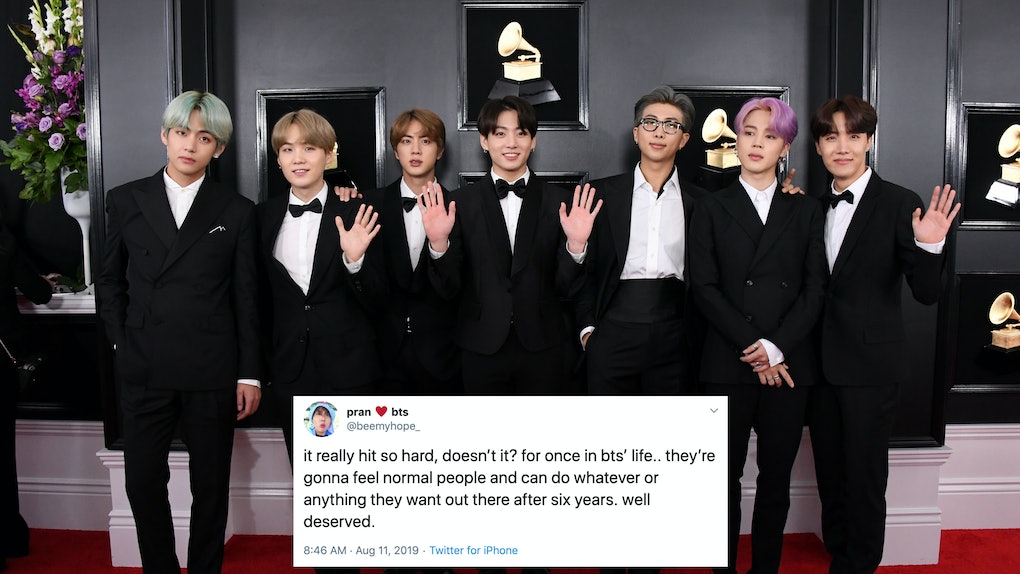 If you're part of BTS' massive, international ARMY, you've probably already heard the news that the world-renowned K-pop group is about to take a long overdue, well-deserved vacay. On Sunday, Aug. 11, BTS' management company Big Hit Entertainment shared that the RM, Jin, Suga, J-Hope, Jimin, V, and Jungkook were going to take a bit of a hiatus from their busy pop-star lives, and the supportive fanbase is actually thrilled. These #RestWellBTS tweets are ARMY at their most supportive.

Big Hit Entertainment tweeted out a statement in both Korean and English sharing that BTS would be going on an "official and extended period of rest and relaxation," aka a two-month vacay where the boys get to do whatever the heck they want. Here's the full statement:

Hello. This is Big Hit Entertainment. We would like to announce that for the first time since their debut, BTS will be going on an official and extended period of rest and relaxation. Today's LOTTE DUTY FREE FAMILY CONCERT performance will mark the last scheduled event before the members prepare to take their vacations. This period of rest will be an opportunity for the members of BTS, who have relentless (sic) driven themselves toward their goal since their debut, to recharge and prepare to present themselves anew as musicians and creators. This will also provide them with a chance to enjoy the ordinary lives of young people in their 20s, albeit briefly. During this time, the members will rest and recharge in their own personal ways. Should you have a chance encounter with a member of BTS while they are on vacation, we ask that you show them consideration for their need to rest and enjoy their private time off. BTS will return refreshed and recharged to return all the love you have and continue to show them. Thank you.

You would think that fans would be outraged that they don't get to see or hear from their favorite artists for two months, right? Well, not ARMYs. Turns out, BTS fans across the world (or at least the Twitterverse) are showing up across the board in support for the boys with the hashtag #RestWellBTS, proving that they might be one of the most supportive fan bases around.

Many fans tweeted about the fact that BTS deserves this rest, like Twitter user @ChimmyJams1 who wrote, "Saw that our boys are getting some week deserved time off. As much as I’ll miss you all, please #RestWellBTS."

Some fans, like Twitter user @BeccaIsMe7177 expressed that they'll miss BTS but be waiting patiently for them to come back.

Oh, and there were also the ARMYs who threatened to have, let's just say, strong words with people who didn't respect the boys' privacy on vacation.

The good news about BTS' hiatus is that just because they're leaving on vacation, doesn't mean their online music, music videos, and interviews are going on vacation with them, so BRB, I'm going to crawl into a BTS internet hole until they boys are back. See y'all on the other side!