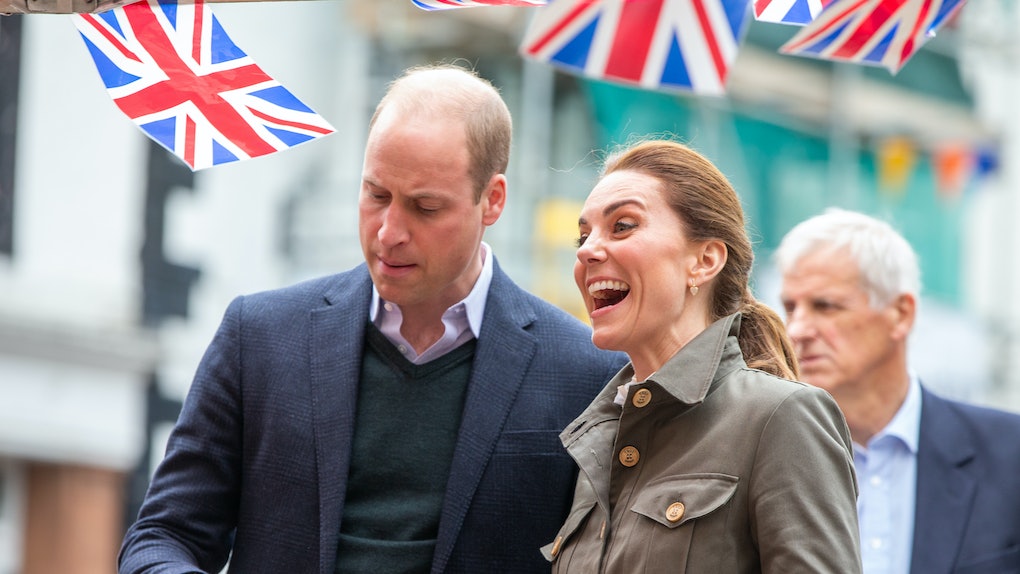 Affair? What affair?! In the middle of rumors that Prince William cheated on Kate Middleton with her rumored "rural rival" Rose Hanbury (notice how many times I've said "rumor" already), the Duke and Duchess of Cambridge were spotted out having a little date together after a public engagement. While the couple is surrounded by undoubtedly stressful tabloid fodder that their marriage is on the rocks, the photos of William and Kate on a secret date hint that these two are doing just fine. Elite Daily reached out to Kensington Palace about William and Kate's reported date, but did not hear back by the time of publication.

The royal family has given people no good reason to believe that the rumors of William's reported infidelity are true. Kate Middleton has been swathed in gossip-filled rumors ever since she started dating William when they were in college, so I imagine she's used to it at this point, but a reported friend of the Middleton family told Us Weekly that Kate is reportedly feeling discouraged and disappointed by these cheating rumors.

“Kate finds the rumors hurtful, obviously, and hates the thought that one day her children will be able to read about them online,” a source told the outlet. As fate would have it, the rumors apparently had an adversely positive effect on Kate and William's relationship, according to Us Weekly.

“It forced her and William to sit back and examine their relationship, which they realized they should have been doing more often,” the reported family friend said. Elite Daily reached out to representatives for the Duke and Duchess of Cambridge previously for comment on this report, but did not hear back by the time of publication.

So, were these photos from Kate and William's date part of their efforts to do a check-in on their relationship?

The photos show the Duke and Duchess hitting up the Inn on the Lake in Ullswater in Cumbria following a royal engagement that day. They reportedly went back to London not long after, but not before the Inn could post some photos of the future monarchs.

In the photos, Kate and William are chatting with other Inn guests and waving to onlookers. The Inn's caption on its Instagram post said,

We had two VERY special guests stop by today! Our Sales Manager Teresa and Dani, one of our Hotel Directors both had the pleasure of meeting the Duke and Duchess of Cambridge! Oh and some small guests came along too.

It looks like Will and Kate had a cute little date night in Cumbria! And while the affair rumors are undoubtedly stressful, the idea that it made the couple check in on their relationship is promising.

A second source told Us Weekly that the rumors “didn’t go down well with Kate” at all, but it made the couple “determined to pull through it and are doing a great job at getting their marriage back on track again.”

“It’s not unusual to have a few hiccups in a marriage, especially after eight years, and Kate and William are no different,” the second insider continued. “They’re still going strong. Regardless of their ups and downs, they love each other dearly and their kids are the most important thing in their lives.”

To hell with the rumors!