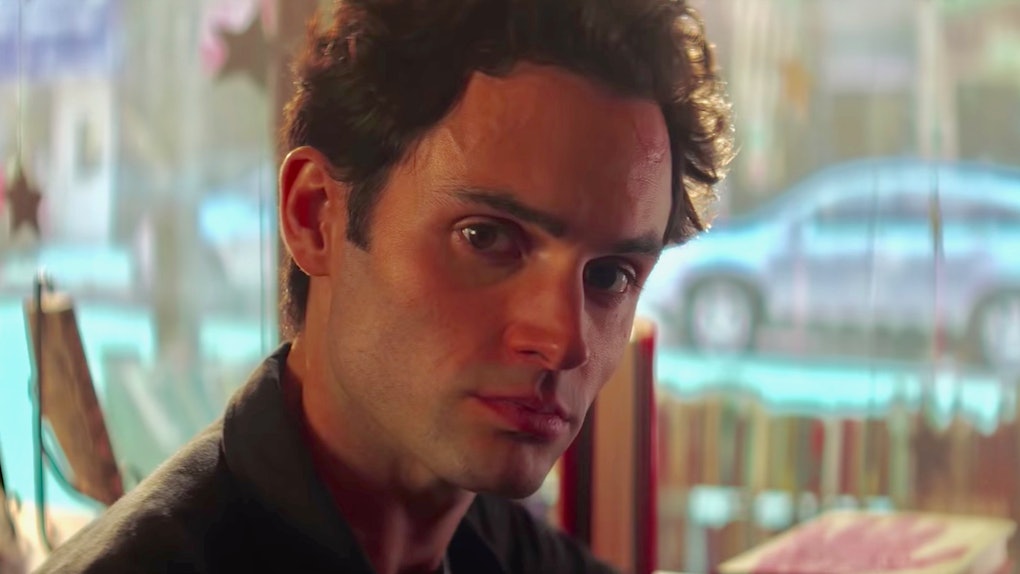 If you got sucked into Joe Goldberg's twisted world on Netflix's You, you'll be happy (or maybe distressed) to hear that there's more coming. Netflix's news Twitter account, "See What's Next," recently posted photos to give fans an inside look into the second season of the show, and one of the photos includes a character we didn't meet in the first season. These photos of theYou cast's Season 2 table read have fans wondering what part Love Quinn will play in this upcoming season.

According to Entertainment Cheat Sheet, Pedretti will co-lead with Badgley but her character will be significantly different than Beck, Joe's love interest slash obsession in Season 1. For starters, show-runner Sera Gamble told Entertainment Weekly that Love Quinn won't be Joe's love interest and will offer a "different kind of friendship and a different kind of relationship." Another huge way she's different from Beck? Love Quinn is totally "uninterested in the world of social media, branding and self-promotion," per Deadline, making her less susceptible to Joe's stalking and perhaps a little harder to make assumptions about.

Getting a peek at this new character is great and all, but I can't help but have so many questions about how Love fits into the You world.

How will Love interact with Joe in this non-romantic relationship? What's Love's relationship to Candace? What's going on with Candace, anyway? Gamble still hasn't given up all the details about the ins and outs of Season 2 but did explain in the Entertainment Weekly interview that Joe's still heartbroken about what he did last season and "is not out there looking for love." As for what's going on with Candace and how Candace and Love's characters intersect? We'll just have to wait and find out.

Love Quinn isn't the only Quinn family member in Season 2 of You, which unlike Season 1, is set in Los Angeles. According to Forbes, James Scully will play Love's brother, Forty Quinn, "a charismatic, privileged bully struggling with addiction." According to IMDb, he'll be in all 10 episodes of Season 2, so viewers can expect him to play a significant role. In addition to the Quinn siblings, viewers will meet Ellie, "a street-smart teenager who works cons on the adults around her," per Forbes. Viewers will also meet Will, a "smart" and "personable" guy whose connection to the rest of the show is unclear so far, per TV Guide. Fans may also see the reappearance of hot therapist Dr. Nicky played by John Stamos, who found himself in a rather sticky situation at the end of Season 1.

The photos of the table read have prompted strong reactions from fans about the next season. Twitter user @gibsonoma tweeted "Please, for the love of god, find a way to #BringBackPeach!," referencing a character played by Shay Mitchell who, spoiler alert, died in Season 1.

Another Twitter user, @KyleDLarson, wrote, "Terrified, but haven’t binged a show like that in a while," which pretty much sums up everyone's experience with the creepy-yet-addictive show.

Fans also noticed the new cast member in the Feb. 15 photos, and Love Quinn was the topic of conversation, of course.

Though there's no premiere date for Season 2, the You Instagram account says "coming soon." Gamble also says fans can expect Season 2 to circle back and address some of the loose ends from season one (like the mason jar filled with pee), per Cosmopolitan. With new cast members and a unique character like Love Quinn, I'm bet you can expect a thrilling second season. As for the most important question: Will Joe still be absolutely terrifying? I guess we'll have to wait and see.

More like this
These Tweets About Jimmy Fallon's TikTok Dance Follow-Up Segment All Say It's Too Little, Too Late
By Brandy Robidoux
These Tweets About Prince Philip's Death Will Break Royal Fans' Hearts
By Jonathan Borge
In 'Riverdale' Season 5, Toni Topaz Is The Black Superwoman Without A Cape
By Erika Hardison
Stay up to date