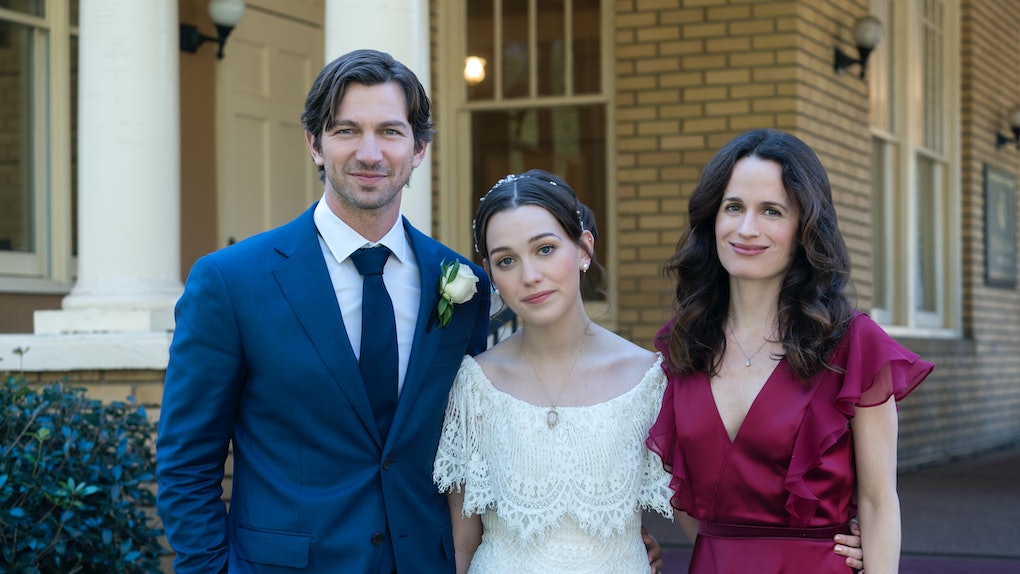 You was a strange beast of a show for Lifetime when it aired back in September. A satire of the standard Lifetime romance/woman in danger trope, the series focused on the story from the perspective of the male stalker, played by former Gossip Girl star Penn Badgley. Sadly, the show didn't find an audience on the network and wound up moving bag, baggage, and already-greenlit-Season 2 to Netflix. But in a twist even more surprising than the series finale, You became a megahit. Now, Netflix has announced Victoria Pedretti will star in You Season 2, solidifying the streaming service's takeover of the series with a star from its original series The Haunting of Hill House.

In Season 1 of You, Joe Goldberg (Badgley) romances and wins over a new girlfriend, with the hilarious romance novel name of Guinevere Beck (Elizabeth Lail). Beck, as she's blessedly called, is completely taken in by her stalker at first, falling for all his over-the-top romantic gestures, which are really his way of controlling her.

One of the remarkable things about the character of Beck was how audiences responded to her, with many complaining she wasn't very likable, and calling her "basic." But that was the point of the character. Most heroines in Lifetime movies would actually come off as unsympathetic and shallow if viewers weren't seeing the story from their points of view.

It also made Beck's fate less sympathetic to the audience than in a traditional Lifetime show. In most cases, a character like hers would overcome all odds, beat her captor, and escape. Instead, not only does Joe kill her, but he manages to escape suspicion for her demise.

Bereft of the Lifetime brand angle driving the series in Season 1, it will be interesting to see where the series goes on Netflix. The first step is casting Joe's next victim, and in this case, Netflix is casting from within its already proven stable of actors, casting Victoria Pedretti, who last played Nell Crain Vance in The Haunting of Hill House.

In the Los Angeles-set Season 2, Pedretti will play Love Quinn, an aspiring chef working as a produce manager in a high-end grocery store. Love is uninterested in the world of social media, branding and self-promotion, focused instead on leading an interesting life. She is also tending to a deep grief — and when she meets Joe Goldberg (Badgley), she senses a shared knowledge of profound, life-changing loss.

From the sounds of it, the new season will stick to continuing to parodying the sort of films found in the Lifetime genre, down to the ridiculous names of the heroines. Love Quinn doesn't sound like her fate will be much more promising than Beck's, at least at first blush.

But the synopsis does not mention You Season 1's big twist ending. Joe's girlfriend before Beck, Candice Stone (Ambyr Childers) is shown to still be alive, despite what viewers were lead to believe. Stone could be a significant wrench in Joe's newest obsession, and the savior a girl like Love Quinn needs.

You Season 2 does not yet have a release date but is expected to arrive in the latter half of 2019 on Netflix.