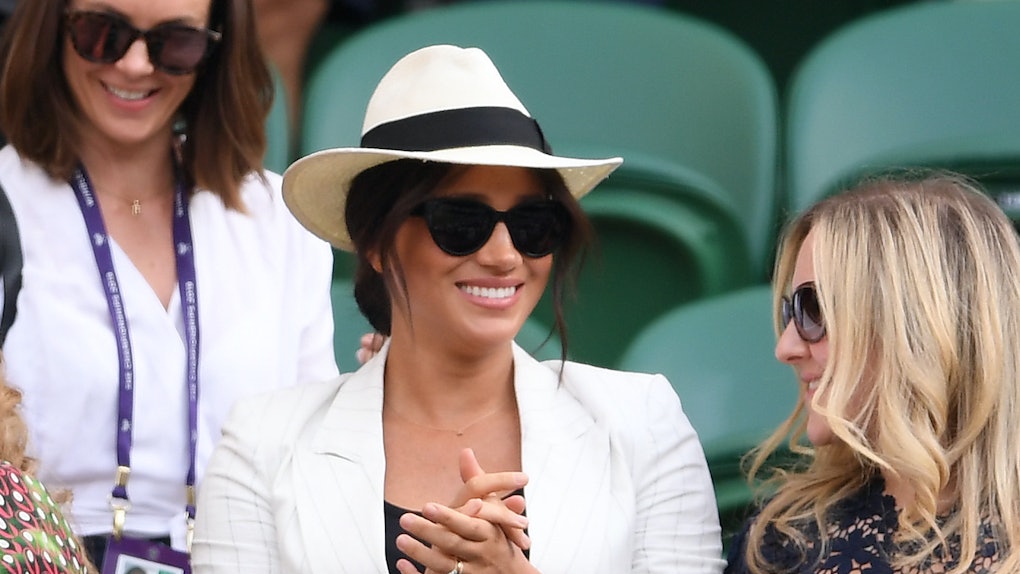 I'm just saying — royal motherhood looks damn good on Meghan Markle. The Duchess of Sussex is still settling into parent-life with her husband, Prince Harry, but that doesn't mean she doesn't have time for the other people that matter to her most. This includes her best friend Serena Williams. Almost two month's after Baby Archie's arrival, Markle stepped out to Wimbledon where Williams undoubtedly tour up the court. The photos of Meghan Markle supporting Serena Williams at Wimbledon are total friendship and #LifeGoals, and I have what I feel is just the appropriate amount of FOMO.

While the public might only know about Williams and Markle's friendship thanks to Markle's high profile relationship, she and Williams actually go way back before the days of Prince Harry. According to People magazine, they first met at the 2010 Super Bowl in Miami where they "immediately hit it off." Since then, it appears Williams has indeed played a major role in Markle's life. She attended the famous royal wedding, threw Meghan her magnificent baby shower, and is now one of Meghan's first stops out after delivering Archie.

Meghan attended Wimbledon in a chic jeans and white blazer ensemble, some kick-ass sunglasses and a chill ponytail. At some point, a super trendy hat popped out, too. Beside her sat her friends Lindsay Roth and Genevieve Hillis.

Frankly, she looked like she was having a great time.

This time last year, Meghan attended Wimbledon with her sister-in-law, Kate Middleton, as one of their first public outings together. Meghan rocked a similar color pallet then, too, making fans wonder if white, beige, and blue make up her staple Wimbledon uniform.

(This Wimbledon-hat phenomenon is for another time and place, but I will definitely think about while I fall asleep tonight.)

Meghan stepped out to the courts just three days before her son Archie's christening. The event is set to take place in the Queen's private chapel at Windsor Castle, and some fans are speculating about who Meghan and Harry chose to be the godparents. Naturally, some conspiracy theorists guessed Williams might be in the running due to her close relationship with Meghan and her involvement in the baby shower. However, now that Meghan's been photographed with pals Roth and Hillis, they're solid contenders, too.

Even if Williams doesn't make the cut as godmother, the timing of her London trip is pretty ideal. It is speculated that only 25 people or so made the christening guest list for July 6, but Williams might just be one of them. An insider revealed to People magazine the duke and duchess "wanted an intimate, peaceful setting in a place with such a special connection to Her Majesty."

Hopefully, Meghan got a little breath of fresh air making it out to support her friend. In my imagination, the two women toasted to William's serve in the locker rooms and joked about the funny baby noises baby Archie makes. I'm sure that how being a celebrity/professional athlete/parent/royal works, right?