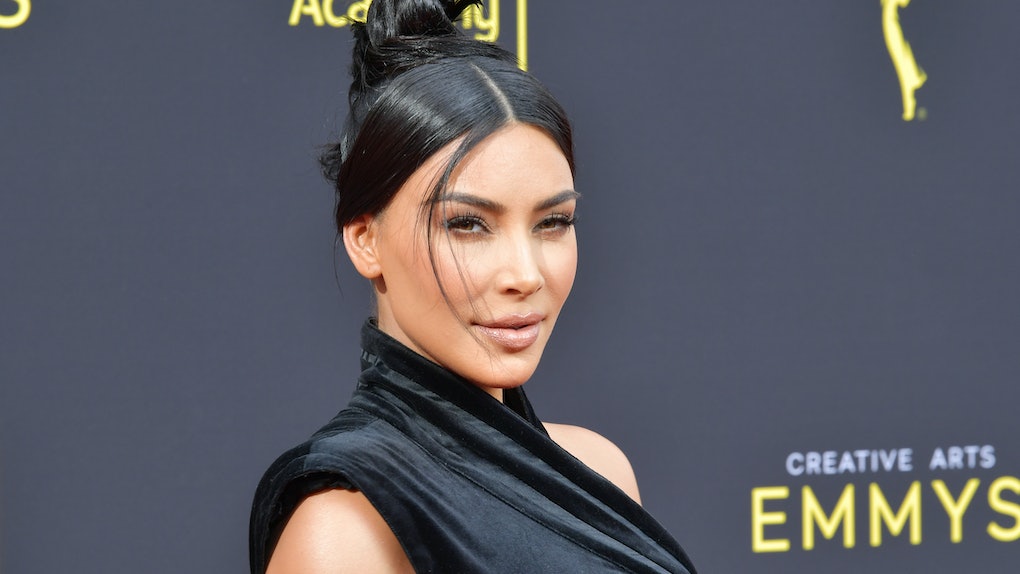 The Kardashian-Wests have welcomed two new members into their family, and no, it's not what you think. Kim Kardashian took to Instagram on Friday, Sept. 20 to reveal that she'd added two adorable Pomeranians to her brood, and she and North need help coming up with names. These photos of Kim Kardashian’s new puppies will make you want some new fur babies of your own, because they're just that adorable.

If you've been keeping up with the Kardashians over the last couple years, you know that the yet-unnamed pups will be joining a Pomeranian named Sushi, whom the KKW Beauty mogul gifted to her daughter North back in June 2017 for her fourth birthday. At the time, Kardashian — who was expecting Chicago — gave her eldest daughter a fur baby to help her prepare for the responsibilities of having a younger sister.

"North has been asking for a puppy for a long time," an inside source told People at the time. "Kim thought it was a good idea for North to take care of a puppy. It could prepare her for baby sibling too." Shortly after welcoming the pup, Kardashian and North took to Twitter to ask fans to help them pick between the monikers Baby Jesus, Peachy Pop (Peaches), Sushi, and Goldie. They eventually settled on Sushi, and now, they're asking for followers to help them brainstorm once again.

"Meet our new babies! We just need names! North came up with names that go with our other Pomeranian Sushi," Kardashian wrote alongside two snaps of their new four-legged friends. "She wants white baby girl to be named Saké and the black baby boy either Soba (Noodle) or Soy Sauce. Please comment below any ideas you have!!!!"

She also shared a poll on Twitter where she asked her followers to weight in on the choices of Soba and Soy Sauce (Soy for short) for their black pup.

At the time of publication, almost 93,000 Twitter users had weighed in, but I wouldn't be too surprised if they choose a name regardless of the popular vote or they go with another moniker entirely. For their first pup, the name Peachy Pop had been the leader with 29% of the votes in their Twitter poll, but the Kardashian-Wests ultimately decided to go with runner-up Sushi, which got 25% of the votes.

While there's no telling whether this is the end when it comes to welcoming more puppies in the future, the mom-of-four has been pretty vocal about her plans not to add any more babies to her brood. She and Kanye West currently have 6-year-old North, 3-year-old Saint, 1-year-old Chicago, and baby Psalm.

Back in late August, Kardashian clarified, "I LOVE my babies so much but 4 is all I can handle with how busy I am, and each one of my babies needs so much attention," in response to a fan who asked her if she wanted any more kids on Instagram questions.

As of now, the Twitter poll is still open, so I'd pick your preference or take to the comments section with some new ideas if you want some input naming the Kardashian-Wests newest furry additions.

More like this
TikTok's Trailblazers: These Creators' Ideas Went Viral Without Them & It Needs To Stop
By Brandy Robidoux
These National Pet Day 2021 Tweets Are Filled With The Cutest Dog & Cat Photos
By Daffany Chan
Gottmik Has Already Made 'RuPaul’s Drag Race' History, Win Or Lose — EXCLUSIVE
By Jonathan Borge
Stay up to date