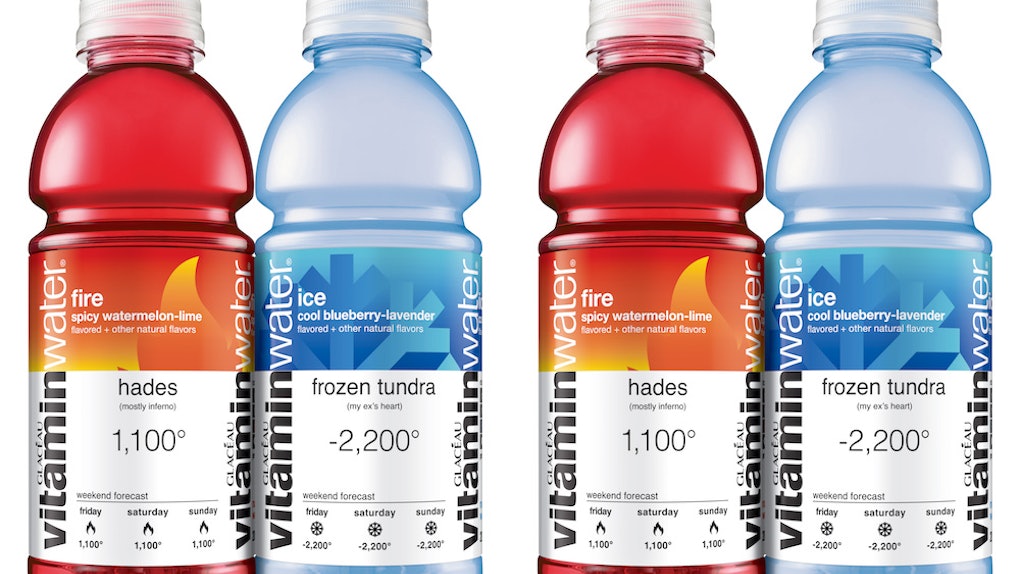 If you were in middle school in the mid '00s like I was, there's a pretty likely chance you and your friends constituted Vitaminwater as a really, really "cool beverage." However, the brand is completely redefining "cool" with a new flavor called Vitaminwater Ice, which supposedly feels like it's lowering the temperature of your tongue. Along with their "Ice" flavor they've also released a "Fire" flavor which does the exact opposite, apparently cranking up the heat tremendously. Honestly, these new Vitaminwater Fire and Ice flavors sound pretty wild, and it seems like only the bravest of the brave could conquer them.

The week of Mach 10, 2019, Vitaminwater added two new and intriguing flavors to their already-extensive lineup, which both sound intense beyond belief. One is called Fire and the other is called Ice, according to the brand, and both are designed to evoke the feeling of the extreme hot and cold temperatures. Aside from the fact that they'll totally trick your brain, though, both flavors happen to sounds pretty tasty.

Vitaminwater Fire, according to the brand, tastes like spicy watermelon mixed with lime. It sounds straight-up infernal, giving off strong notes of jalapeño and habanero. If you aren't able to hang with a little tingling in your throat and nose, though, you probably can't handle this.

On the other hand, the brand's Ice flavor tastes like cool blueberry and lavender, according to Vitaminwater. Giving off major arctic tundra vibes, it gives you chilling icy sensations throughout your nose and throat. Honestly, it sounds like it would be pretty refreshing on a hot summer day.

OK, these new Vitaminwater flavors are so strange, and I seriously love the concept behind both of them. Do I pair them with certain foods, or should I guzzle them all on their own? Should I try using them as mixers with tequila or vodka? Maybe whiskey? I truly can't really decide on how I want to sip these babies, but either way, they sound pretty mind-blowing.

While I haven't come across any cocktails mixed with Vitaminwater in my last few years of barhopping, I have heard of certain bars serving LaCroix cocktails. In fact, one restaurant in California called the W Los Angeles in Beverly Hills boasts an entire LaCroix cocktail menu. That's right — for $14 a pop, you can order The French Kiss (mixed with LaCroix Berry, Hennessy V.S., Montenegro, and lemon), The Berry Wild (including LaCroix Pamplemousse, Belvedere Wild Berry, Benedictine, and lemon), and finally the Coco-jito, (which contains LaCroix Coconut, Don Julio Blanco, lime juice, and a sprinkle of mint). Honestly, all of them sound pretty tasty, and you could probably try recreating them with a base of Vitaminwater.

While I haven't tried either of these new Vitaminwater flavors yet, I'm impressed nonetheless. Even though they sound pretty intense, I'm pretty sure I'll be able to handle it. Just be sure to keep a sweater and a glass of ice nearby, because they might be too cold and hot for any average human being to handle.