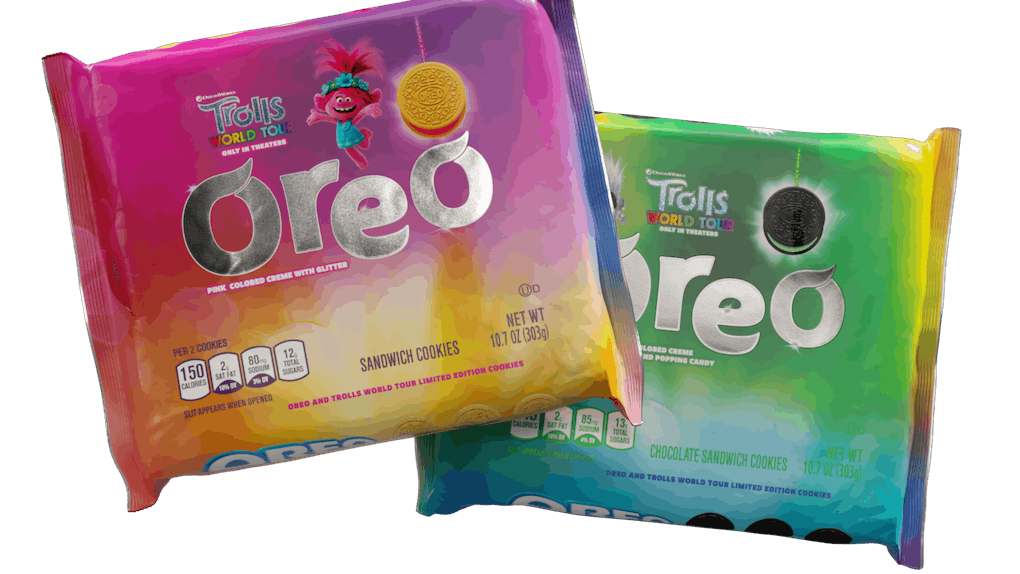 Oreo fans, listen up, because there are two exciting new cookies you can try out this season. The snack company unveiled the limited-edition Oreo products in partnership with the upcoming Trolls movie. These new Trolls World Tour Oreo cookies feature some bright-colored fillings, which are the perfect for spring.

The new cookies, Queen Poppy and Tiny Diamond, celebrate two of the main characters from the film. Both cookies are filled with the classic Oreo creme you know and love but with a fun twist: Queen Poppy cookies feature Golden Oreo wafers and pink-colored creme with glitter, while Tiny Diamond cookies have classic Chocolate Oreo wafers and green-colored creme with glitter and popping candy. The glitter is edible, of course, and even though the creme is brightly colored, the only flavor difference is the popping candy in the Tiny Diamond cookies.

Each pack also comes with three special cookie designs, which are unique to the pack's featured character. For example, if you opt for the Queen Poppy pack, you'll get designs showing her guitar and headphones, while the Tiny Diamond pack includes designs of a record and cassette tape. There's also a "Music Is Life" embossment to celebrate the film's musical theme.

You can pick up the limited-edition cookies as of Monday, March 9, wherever Oreo cookies are sold. Since the product is only available while supplies last, you'll want to hit the shelves ASAP. As of publication, both cookies are available on Target's website for $2.99 per 10.7-ounce package.

Oreo is also teaming up with Trolls World Tour to release a song from the film's soundtrack — "Just Sing" — on Monday, March 9. Here's how it works: for the first 60 hours (so, until Wednesday, March 11), you'll only be able to listen to the original tune by going to the Oreo website, where you can scan original Oreo cookie embossment. Once you've unlocked the full-length soundtrack, you'll be able to rock out to the summer hit which features the entire cast of Trolls World Tour, including Justin Timberlake, Anna Kendrick, Kelly Clarkson, Mary J. Blige, and Icona Pop.