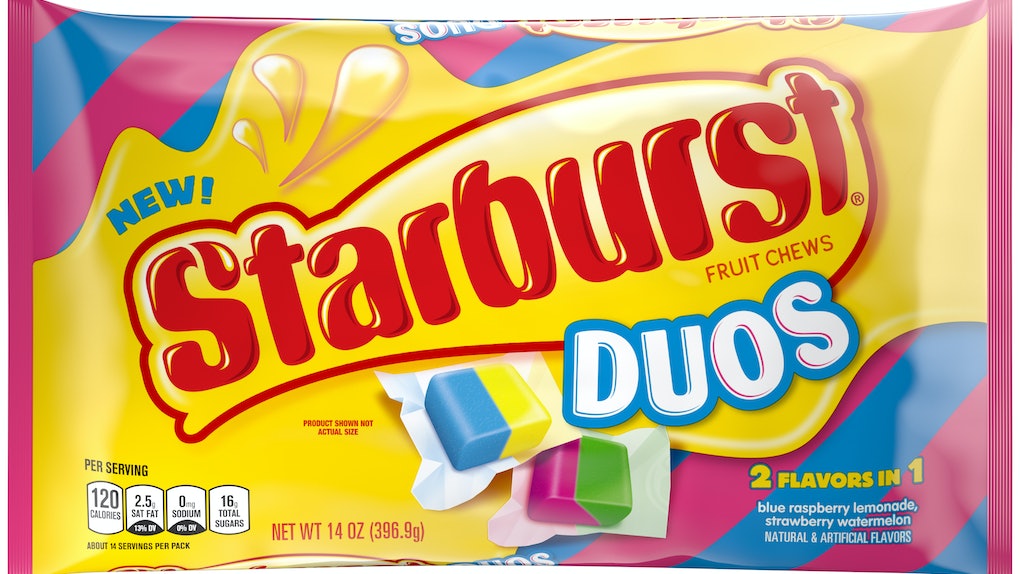 I don't want to say this, but, um, I can be an indecisive person. I usually think of myself as someone who knows what they want, but sometimes I get weak in the knees when it comes to making certain decisions. Like when I have to decide which Starburst flavor to eat. What a problem to have, right? Typically, my indecisiveness would just lead me down the path of eating a few pieces of candy (no shame here). Starburst is here to solve all of my problems. These new Starburst Duos have 2-in-1 flavors in case you're like me and can't make up your mind about which one to eat.

Starburst is rolling out a brand new product — and your taste buds are going to be singing its praises. The company is launching Starburst Duos, and the flavor is twice as nice than ever before. The new line of fruit chews, which was announced on Tuesday, Feb. 19, combines two juicy flavors into one Starburst (!!!). This is the best news I've heard in a long time. The delicious new Starburst Duo flavors include Strawberry and Watermelon, as well as Blue Raspberry and Lemonade.

"We know consumers' taste preferences are constantly evolving, and new flavor trends are shaping the industry," Desi Okeke, Sr. Brand Manager, Starburst, said in a press release. "We are always listening to our fans, and they love it when two flavors come together in confections."

Starburst Duos are sold in two sizes to meet your snacking needs. First up is the single pack of Starburst Duos for just 99 cents, according to Starburst. This 2.07-ounce package is perfect for keeping in your bag for an on-the-go treat. For a more sharable size, you can buy the 14-ounce bag to keep on your desk or in the pantry at home. The larger bag retails for $3.19. Each package includes both new flavors, so you don't have to pick one over the other. It's the best of both world, really.

Does this news sound familiar to you? That's probably because talk of the Starburst Duos began back around last November. If you've been waiting patiently ever since to get your hands on a pack of Starburst Duos, the time has finally come for you to live your best life.

You can find the new Starburst Duo products wherever other Starburst candies are sold, like many major grocery chains and convenience stores, according to the company. I was able to find bags of the fruit chews on Amazon and with free shipping. If you're currently snowed in or about to be, this one is for you. I couldn't immediately locate the new Starburst Duos on either the Target or Walmart website, but that doesn't mean the candies aren't in stock. Check with one of your local stores to see what you can find.

Thank you, Starbursts, for making life a little easier for me and alleviating the headache of having to choose between flavors. It's the little things. OK, BRB. I'm off to track down a bag of Starburst Duos for myself.