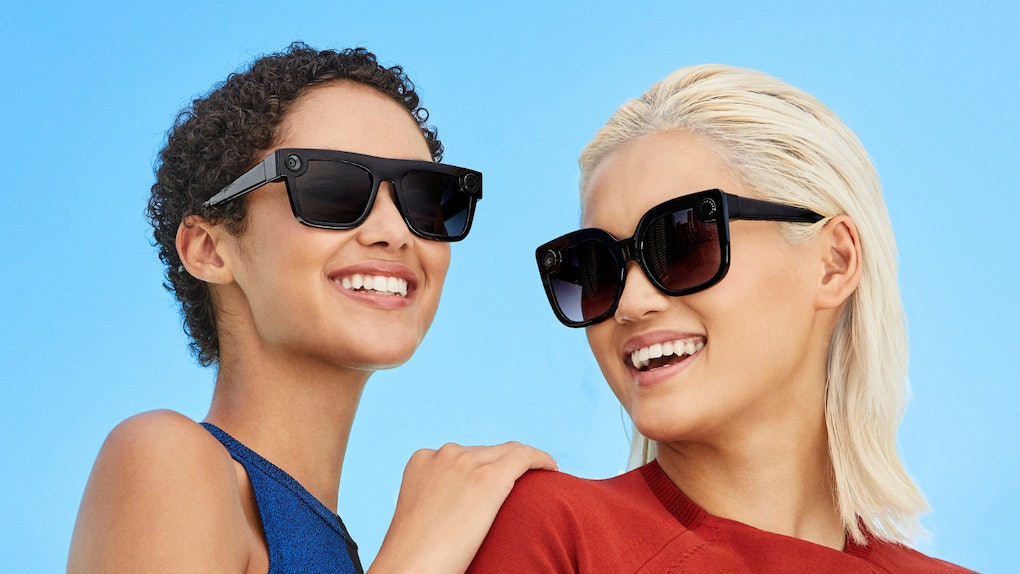 In a world where you want to capture every memorable moment, it's essential to have your camera on-hand at all times. Thankfully, Snapchat is making it easier than ever to share experiences with friends thanks to the release of its latest Spectacles 2 lenses. These new Snapchat Spectacles 2 styles are perfect for snapping on the go. So, it's time to put your phone away and break out the Spectacles, because the way you capture content is about to get so much easier than ever before.

On Tuesday, Sept. 5, Snapchat announced the release of two new Spectacles 2 designs for consumers. The new Snapchat Spectacle 2 styles are called Nico and Veronica. Both pairs of Snapchat Spectacles capture high-definition photo and video and are outfitted with dual microphones that pick up high-quality audio, according to Snapchat. Just like the Spectacles 2 originals, which were released in April 2018, the Veronica and Nico Spectacles are also water-resistant. (So, they are perfect for all of your end-of-summer pool snaps.) The Nico and Veronica Spectacles cost $199 per pair in the United States and can be purchased by visiting the Spectacles website.

The two new styles will blend right in with your other shades. The Nico Spectacles are black and have a classic wayfarer style. The Veronica Spectacles feature an oversized lens with a white marble effect on the inside of the frames. You really can't go wrong with whichever style you choose. There are two cameras built into the corner of each lens to make sure you get the shot you want. Also, each new pair of Snapchat Spectacles includes a black protective sunglass case to help avoid scratching the high-tech lenses. The Spectacles also come with a yellow charging cable.

Snapchat Spectacles are wearable sunglasses that capture photos and video from the real world and upload it to the app. The Nico and Veronica Spectacles will transfer your content "seamlessly" to the Snapchat app, per the company. So, how do you share your Specs Snaps with friends? It's easier than ever to save and share content. Users have the ability to share their Specs Snaps on or off Snapchat. You can auto save any photos or video captured by the high-tech glasses directly to your phone's Camera Roll. From there, all you have to do is export the images to Snapchat and add them to your Story or send them to your friends. It should take about three seconds to transfer a video to the Memory section of your Snapchat app, so you'll be able to share moments (like that crazy hole-in-one golf shot) almost instantly.

The best part about all of this is you can share your Spectacles content on any platform you want — not just Snapchat. Since the photos and video get saved directly to your phone, you can send them in texts or post to a different social app. The new Spectacles come with ample storage space, too. The Nico and Veronica Spectacles 2 can hold up to 150 videos or 3,000 photos at a time.

If you're buying a new pair of Spectacles, it won't take you but a second to pair them with your Snapchat app. Open the app and navigate to your profile. Click on the "Settings" tab and select "Spectacles." Follow the prompt and you'll be ready to get Snap in no time.

If you currently wear glasses and are wondering how you can have with Spectacles, Snapchat has your back. Snapchat offers Spectacles with prescription lenses for those customers who need it. Seriously, what hasn't Snapchat thought of? I can't wait to get my hands on a pair of these.

Spectacles are available for purchase starting on Wednesday, Sept. 5. The glasses will only be available in limited quantities for now. If you're eyeing a pair, now is the time to get them. Currently, the Nico and Veronica Spectacles are being sold in the United States and only in certain countries in Europe. They will also be sold at participating Neiman Marcus and Nordstrom locations later this year.