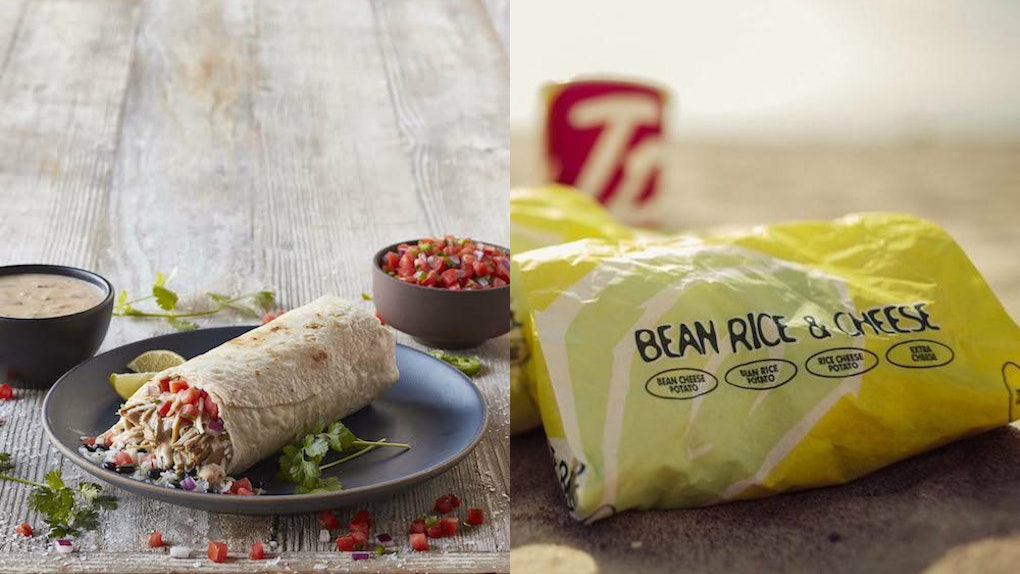 If you ask me, April is a totally underrated month for holidays. Between April Fool's Day to kick off the month on the first, Free Cone Day at Ben & Jerry's on April 9, and — most importantly — National Burrito Day on April 4, there's so much to celebrate. And as a self-proclaimed Mexican food aficionado, I can confidently are so many tasty (and cheap) ways to get your bean and cheese fix National Burrito Day this year. So if you haven't already decided where you'll be celebrating, these National Burrito Day 2019 deals are a few solid options.

As you know, every burrito is different in their own way — some are filled to the brim with rice and beans, while others ooze with cheese and chicken. Some are bursting with juicy steak, while others take things up a notch with grilled cauliflower. That being said, National Burrito Day offers all varieties of burritos, in addition to different deals. Whether it's buy-one-get-one, all-day happy hour (yes, it totally exists!), or simply a few super cheap offerings or coupons, however, I don't care, as long as I get to celebrate. Definitely make a point to browse the National Burrito Day options before tomorrow, because you definitely won't want to miss out on these undeniably delish deals.

California-based Mexican chain Miguel’s Jr. is throwing down with a gloriously cheap offer. according to the brand, customers will be able to get a Bean, Rice & Cheese Burrito, or a Bean & Cheese Burrito for $1.99 all day long on April 4, at all Miguel’s Jr. locations. No coupon will be necessary.

Tex-Mex chain Tijuana Flats is celebrating the greatest holiday of the year with a delicious all-day deal at all of their locations on April 4. According to the brand, for $5.99 you'll be able to get a burrito, chips and a drink, with no coupon necessary. The burrito includes your choice of protein as well as any toppings, refried or black beans, rice. If you're looking to get a steak burrito, you can add it for an extra dollar.

To celebrate the best wrap imaginable, QDOBA Mexican Eats is offering not double, but triple points to any and all rewards members on April 4, according to the brand. Joining their rewards membership is totally free, and in the long run, it earns you free food. So if you're smart, you'll join ASAP.

Whether you're going to get burritos with a friend or if you're eating double, participating El Pollo Loco locations will be celebrating with a day-long BOGO Burrito deal on April 4, according to the brand. Just make sure to show this special coupon at check out, and keep in mind it's not valid for online or mobile ordering.

If you'll be in or around the Big Apple on April 4, you're in luck. Midtown hot spot Vida Verde will be offering a mini Bullet Burrito (with the choice of chicken, chorizo, or cauliflower filling) as well as a Margarita for $10, according to the brand, and no coupon will be necessary. The deal will last between 5 p.m. and 9 p.m., so it goes without saying happy hour will be lit.

Again, if you're NYC-based, you're in luck. Mexican fast-casual restaurant Oxido is offering a pretty solid National Burrito Day deal at both of their Manhattan locations. With the purchase of a burrito, you'll be able to get free chips and a fountain soda, as long as you show this coupon at check out.

In my eyes, Chipotle is the king of burritos, and luckily, they're offering a sweet deal. According to Offers.com, you can get free Chipotle delivery on orders that equate to $10 or more on April 4. This includes orders made through the Chipotle app, their website, or through DoorDash.

Those in the Lone Star State can get in on all-day happy hour on April 4, according to Twitter, and it's valid at every location. They'll also be offering their signature Grande and Durango Burritos for only $7.99 all day long.

If you missed Moe's Monday this week, the chain is offering $5 burritos on April 4, according to Offers.com. And if you end up signing up for the Moe’s Rockin’ Rewards program, and you’ll receive a one free burrito for your birthday every year — which honestly — would be the greatest gift of all.

If you're lucky enough to be kicking it in San Diego , you can simply show this Twitter post to any Sombrero Mexican Food cashier, and receive a 35 cent burrito with the purchase of any other burrito. Buy-one-get-one for 35 cents is seriously the dream, if you ask me.

I'm picky, so I — personally — am a big fan of customizing my food. So you could probably imagine how thrilled I am that Willy's Mexicana Grill is offering a Build-Your-Own Burrito deal for $4.04 on April 4, according to their website. Plus, if you get in on the deal, take a photo, and post it to social media using the hashtags #Willys404 and #NationalBurritoDay you could get the chance to win a $500 Willy’s Gift Card Just click on the link above to RSVP, and you'll be good to go.

At Mexica fast food chain Del Taco, you can get a free half-pound Bean & Cheese burrito on National burrito day with a $5 minimum purchase when you download the Del App, according to a Twitter post. Plus, it looks like you can douse it your sauce of choice: red or green.

At all participating California Tortilla locations, Elito rewards members will receive a free burrito or bowl burrito with a burrito purchase on April 4, according to Offers.com On April 5, you will receive an email for the free burrito, and it's valid until April 12.

There are so many ways to get your 'rito fix in honor of National Burrito Day, and so little time. So get your wallet ready, and make way for an ample amount of stomach space. You'll definitely need it.