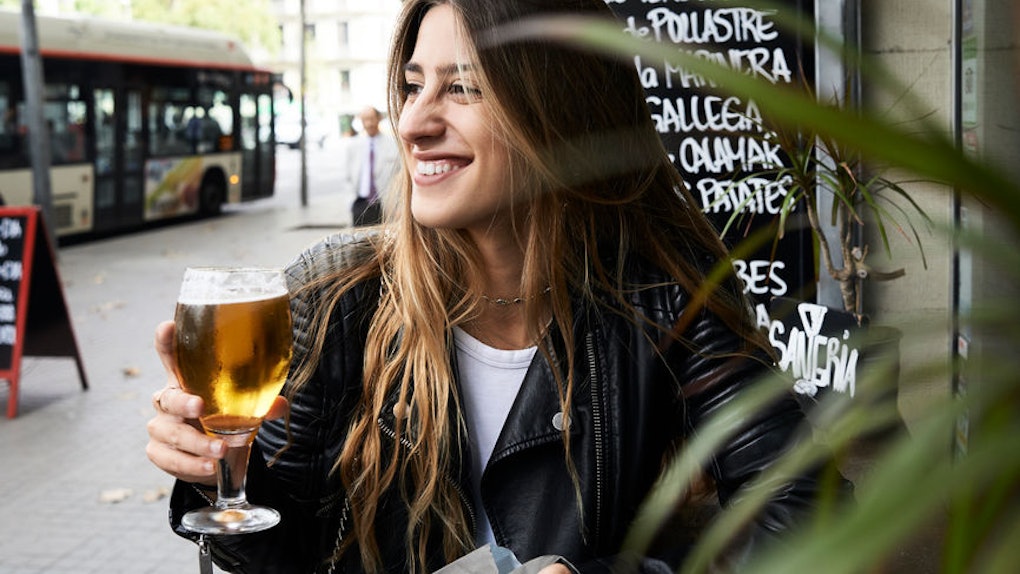 If you stopped paying attention to daily "holidays" after National Tweed Day on April 3 (yes, it's a real thing), I totally get it. It seems like there's something new to celebrate every day, and TBH, who has the time to keep up? Well, I'm here to tell you to make time, because National Beer Day is coming up so, so soon — and you don't want to miss out. To help you celebrate, you can check out these National Beer Day 2109 deals on April 7.

Whether you've never heard of National Beer Day or if you celebrate it every year, there is sure to be a deal you'll love. Again, the big day this year lands on Sunday, April 7, so clear your calendar and get ready to enjoy some discounted brews. In honor of the holiday, restaurants are going all out to offer deals on the hoppy sips you love (if you're 21 years or older). Plus, National Beer Day just so happens to come along right as the weather is getting warmer, and there is almost nothing better than enjoying an ice cold brewski during #patioszn. Let's hope the sun is shining on Sunday, because that will make the following deals just that much better.

If you've never been to Yard House, a high-end sports-bar chain in 27 U.S. states and Washington D.C., then National Beer Day might be the time to try it out. Boasting over 100 drafts on tap at every location, you'll definitely find a brew worthy of the $3 pints and goblets deal on April 7, as advertised on the chain's official Twitter account.

Fair warning, the deal is not valid in Illinois, Massachusetts, New York, Pennsylvania, Georgia, or at LA Live in Los Angeles, California, per a tweet following the offer. If you're not in one of those states, though, enjoy the discount!

Now, you might not think of cold ones when you think of Olive Garden, but on April 7, you can swap out your glass of red for an icy Blue Moon to go with all those breadsticks. The Italian chain's "5 for $5" drink menu features five libations, each priced at — you guessed it — $5. One of the options is none other than a glass of Blue Moon Belgian White.

You can score the $5 Blue Moon on National Beer Day and while the menu runs through May 27, according to the Olive Garden.

Despite its auto-themed name, Quaker Steak & Lube is actually a casual dining chain that originated in Pennsylvania. With locations in 12 states across the country, you just might be able to find one near you to grab a $2 domestic pint on April 7 in honor of National Beer Day, according to USA Today. Per a promo on the chain's website, the April 7 deal is good on Bud Light, Budweiser, Coors Light, Miller Lite, and Michelob Ultra.

The deal is good at participating locations, so I'd make sure to ask about it before your order your $2 brew.

If you haven't heard of it before, Drizly is an online alcohol delivery service. In an email to Elite Daily, a Drizly representative shares that the brand is offering "$5 off or free delivery for new users" when you use the promo code "nationalbeerday" at checkout. The offer will be good through National Beer Day on Sunday, April 7.

So if your favorite spots don't have your go-to drinks, you can get it on the cheap from Drizly when you use the promo code for your online order.

In the Big Apple for National Beer Day? Head to Grand Central Terminal for some killer discounts, according to Newsweek. According to the Grand Central Terminal website, you can score quite a few deals. Central Market New York is serving $3 draft beers all day on April 7, while supplies last, and Tartinery has $3 beers with any food purchase on Sunday. If you like to sample more than one brew at a time, the $20 three-beer flights at Art Bird & Whiskey Bar are just what you need. All aboard for cheap beers!

There's good news if you're super into this Ruby Tuesday deal, because it appears to be a happy hour that happens all year long. Taking place in most locations from 4 p.m. until as late at 7 p.m. local time (ending time varies by location) — and again from 9 p.m until close — the chain's happy hour menu is loaded with deals. For Sunday, you'll like the "$2 All-American Drafts." Hungry? Check out the $4 appetizers like the Spinach Artichoke Dip.

Per the website, Happy hour is not available in Massachusetts, North Carolina, Rhode Island, Oklahoma, or Indiana, so keep that in mind as you enjoy National Beer Day.

If you don't see a deal here that is in your area, you might want to check with your favorite local spot to see if they're running any specials. There's a good chance you'll stumble upon another offer or two. However and wherever you celebrate, I wish you a very hoppy (I couldn't resist) National Beer Day!