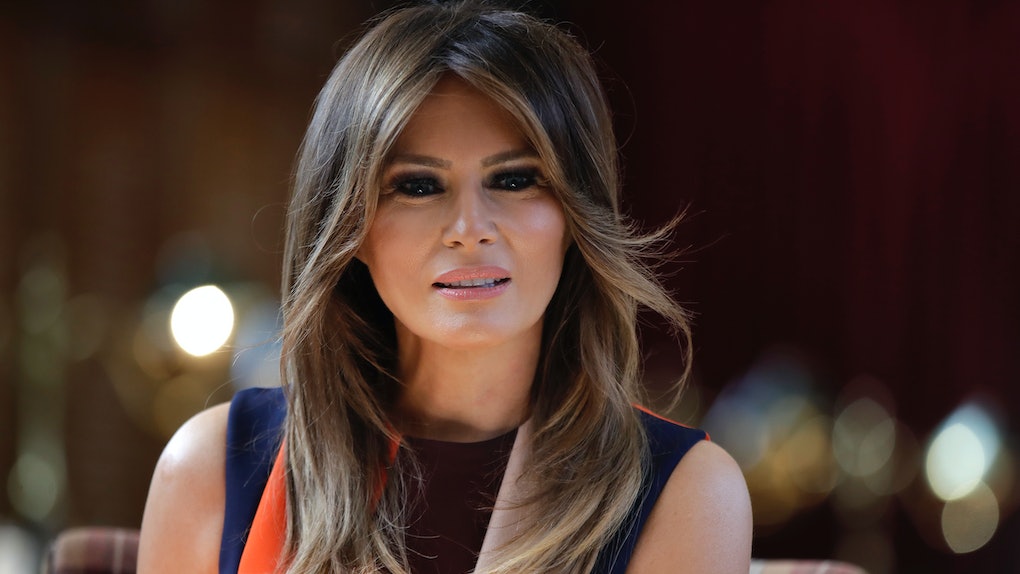 First lady Melania Trump celebrated her birthday on Friday, April 26, and she was swarmed with adorable celebratory posts on social media — well, for the most part. The White House sent out a birthday tweet that Internet users have said was more than a little awkward, as it featured an, um, interesting photo of the first lady. Like always, they gave the post the meme treatment, and these memes of Melania Trump's birthday post from the White House just can't deal.

In honor of Trump turning 49 on Friday, the White House tweeted out a birthday post in the early hours of April 26, captioning it, "Happy Birthday, @FLOTUS!" which is sweet and all, but then there's that photo attached to it. It shows Trump sitting on a sofa in the Oval Office while being surrounded by photographers. But they're not aiming their cameras at her. According to The Huffington Post, they were taking photos of the president and Czech Prime Minister Andrej Babis, who were sitting in chairs across the room. The photo reportedly dates back to March, when the two leaders met to discuss, among other things, “how best to advance relations” between their countries, according to The Associated Press.

To help put it into perspective, here's the photo the White House tweeted:

And then another angle of the room:

"Awkward" — said the internet. People seriously can't help but wonder: Why did the White House choose that photo out of all its options?

"To wish her a happy birthday, you posted a picture of the first lady looking miserable in a room full of people with their microphones and cameras pointed at someone else in the room?" she wondered, adding, "Classy."

"This is SO STRANGE," actress Mia Farrow added.

And then the internet got really out of control with the memes, because of course it did.

Social media can be really wild sometimes, but in the White House's defense, it's the thought that counts, right?

You can say what you want about the post, but Trump seemed to be totally satisfied with the b-day tweets. She tweeted later on April 26, "Thank you to everyone for the beautiful birthday wishes!"

Beyond the birthday tweets, it appears that Trump had a pretty interesting birthday. According to People, she and her husband had dinner at the White House with Japanese Prime Minister Shinzo Abe and his wife, Akie. While President Trump didn't share anything for his wife on his personal Twitter page, he opened up about their plans earlier in the day on April 26 while speaking to reporters in the Oval Office, saying:

We’re celebrating our First Lady’s birthday. It’s her birthday. So I said to Melania, ‘Would you like to have Mr. and Mrs. Prime Minister and Mrs. Abe join us for your birthday?’ And she said, ‘I can’t think of anybody I’d rather have.’

So while things may have gotten a little awkward, it looks like Trump's birthday wish ultimately came true, which is all that matters at the end of the day.

Now let's see how this goes on her 50th birthday.