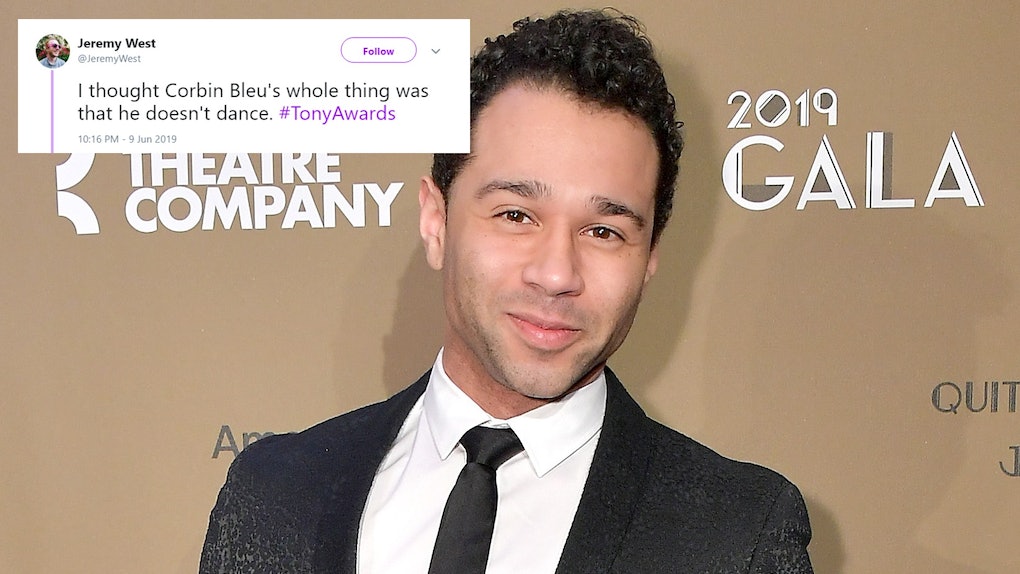 Remember the Disney Channel wonder that was Corbin Bleu? As Zac Efron's High School Musical sidekick and the Double-Dutching star of the movie Jump In, Bleu was a subtle triple treat amidst the Disney talent pool. He never quite rose to the post-Disney fame of co-stars like Efron and Vanessa Hudgens, but he's built a career in theater since leaving East High. The actor is currently showing off his tap-dancing skills in a Broadway musical, and these memes of Corbin Bleu at the Tony Awards will win over your nostalgic heart. What would Chad Danforth say about these dance moves?

Although he showed off smooth moves on the basketball court as Troy Bolton's best friend in High School Musical, Bleu's Chad moved past his aversion to performing in 2007's High School Musical 2. Working at a country club for the summer with his fellow Wildcats, Chad was reluctant to participate in the club's talent show, but Ryan (Lucas Grabeel) wouldn't back down from persuading him and the other athletes to join. Their disagreement led to the iconic, baseball-themed musical number "I Don't Dance."

Given Chad's reluctance to dance the day away, Bleu's theater work featuring dance is pretty funny. After making his Broadway debut in 2010 in In the Heights, Bleu then starred in Godspell before embracing his inner Gene Kelly in 2016's Holiday Inn. In this role, Bleu won a Chita Rivera Award for Outstanding Male Dancer in a Broadway Show, but his current role in the Broadway revival Kiss Me, Kate is what's captured fans' attention.

Playing Bill Calhoun/Lucentio in the Tony-nominated show, Bleu performed the number "Too Darn Hot" with his co-stars during the Tony Awards on June 9. His standout moment occurred about a minute and a half into the song when he demonstrated a fast-paced series of tap moves that would make East High drama teacher Ms. Darbus proud.

Bleu, who trained as a dancer when he was a child, may be an old pro, but that didn't stop viewers from reminiscing about his "I Don't Dance" days on Twitter. Who's the best pick for the spring musical now, huh?

His performance has also stirred up fans' old feelings for the Dancing with the Stars alum. Bleu's mom probably doesn't have his picture in the refrigerator à la Mrs. Danforth, but I'd bet there might be a snapshot from this Kiss Me, Kate number on her fridge soon.

At the Tony Awards, Kiss Me, Kate was nominated for Best Revival of a Musical, Best Orchestrations, and Best Choreography, while leading star Kelli O'Hara was nominated for Best Actress in a Musical. The show lost in all categories, but Bleu racked up Chita Rivera Award and Drama Desk Award nominations for his own work. This Wildcat certainly got his head in the game. Fingers crossed that more dancing roles are in Bleu's future — can you imagine a future where Chad Danforth wins a Tony instead of Sharpay Evans?

If you can't make it to New York to see Bleu's hot moves for yourself, it just may be impossible to tire of watching that Tony Awards performance. You can also stream or download the Kiss Me, Kate cast recording and Bleu's golden vocals on various platforms. Kiss Me, Kate runs at New York's Studio 54 until June 30, 2019.

More like this
This Video Of Disneyland's Marvel's Avengers Campus Is Super
By Cianna Garrison
Emma Stone's 'Cruella': Premiere Date, Trailer, Cast, Plot, & More
By Abby Monteil and Dylan Kickham
17 Tweets About Simu Liu In The 'Shang-Chi' Teaser, From Proud 'Kim's Convenience' Fans
By Dylan Kickham
Stay up to date