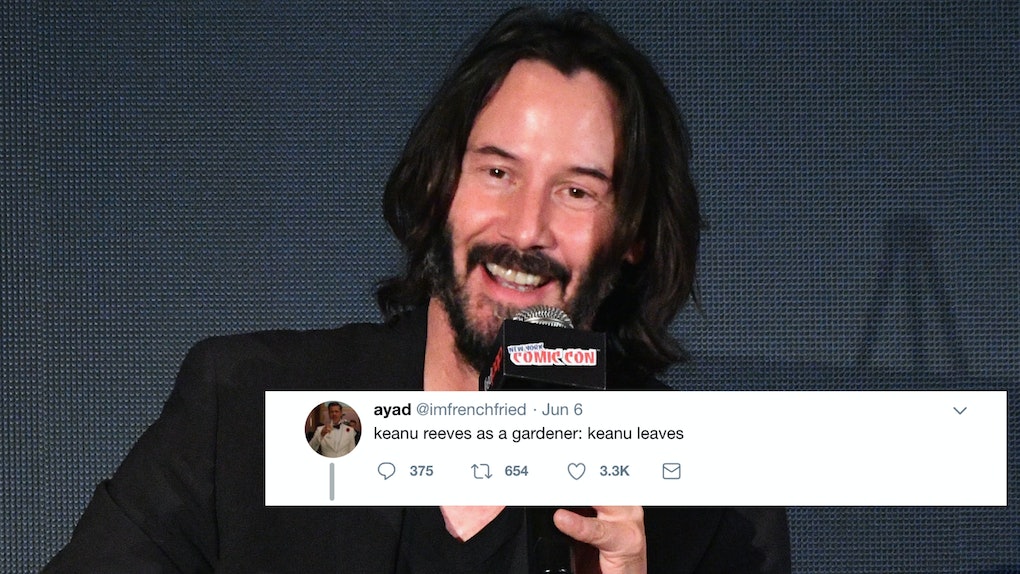 The internet can be a strange, strange place sometimes, but it can also be pretty funny and wholesome other times. If you like both the weirdness and the goodness the internet can bring, you might be excited to know that a new meme has emerged at the intersection of strange and wholesome — and it has to do with none other than Keanu Reeves. These Keanu Reeves rhyming memes will have you laughing hard at the punny and adorable content.

The Keanu Reeves rhyming meme surfaced on Twitter around June 6, and it is pretty straightforward. The meme starts with Keanu Reeves' name, and then you have to attribute an emotion or pretend there's a certain task he has to do or place he has to be, and then you rename him based on the task or event. The only catch is that the new last name has to rhyme (or mostly rhyme) with "Reeves" for the meme to work. For example, Twitter user @imfrenchfried gave Reeves the profession of a gardener and, using that profession, renamed him Keanu Leaves. Because, you know, gardens have leaves. Another Twitter user @LightOfVishanti gave him the emotion of grief and renamed the beloved Matrix actor Keanu Grieves. Luckily, Twitter user @tinkerbeth88 created a positive meme to counter Keanu grieving, writing, "Keanu Reeves making his dreams come true: Keanu Achieves." You get it.

Here are some more Keanu Reeves rhyming memes that will truly make you giggle at the absurdity of the internet.

Reeves has been at the center of internet discussion recently, not only because it's so easy to rhyme "Reeves" with "leaves" and "peeves," but also because of his cameo in the new Netflix film, Always Be My Maybe. The film, starring Ali Wong and Randall Park, premiered on May 29, 2019, and it centers around two childhood best friends and sweethearts who have finally reconnected after several years apart.

But one of the highlights of the movie had to be Reeves' appearance where he plays an over-the-top and pretentious version of himself, delivering pure comedic gold to audiences. Check out the clip below:

His cameo in the movie was met with a lot of laughs and praise from Twitter users. Twitter user @JTEmoviethinks wrote, "Keanu Reeves scene in the Netflix movie #AlwaysBeMyBaby is one of my favorite scenes of the year." Twitter user @BoobsRadley expressed shock over how good the role was, writing, "We knew Keanu was funny but Keanu in “Always Be My Maybe” is so funny it’s actually shocking."

Other Twitter users made the bold but fair claim that this was one of their favorite cameos and scenes of the year. Twitter user @nancywyuen wrote that Reeves' cameo in Always Be My Maybe was one of the funniest cameos ever, noting that she loved how "Keanu Reeves is willing to make fun of himself." Twitter user @HadleyFreeman also shared a lot of love for the cameo, writing, "The Keanu Reeves section of Always Be My Maybe may well be my favourite 20 or so minutes of the whole of 2019."

Who knew 2019 would bring so much good Keanu content? I, for one, am not disappointed at all.

More like this
These Tweets & Memes About April Fools' Day 2021 Hilariously Shut Down The Holiday
By Lara Walsh
Khloé Kardashian's Response To Her Unretouched Bikini Photo Leaking Gets Honest
By Brandy Robidoux
These Tweets About Jimmy Fallon's TikTok Dance Follow-Up Segment All Say It's Too Little, Too Late
By Brandy Robidoux
Stay up to date