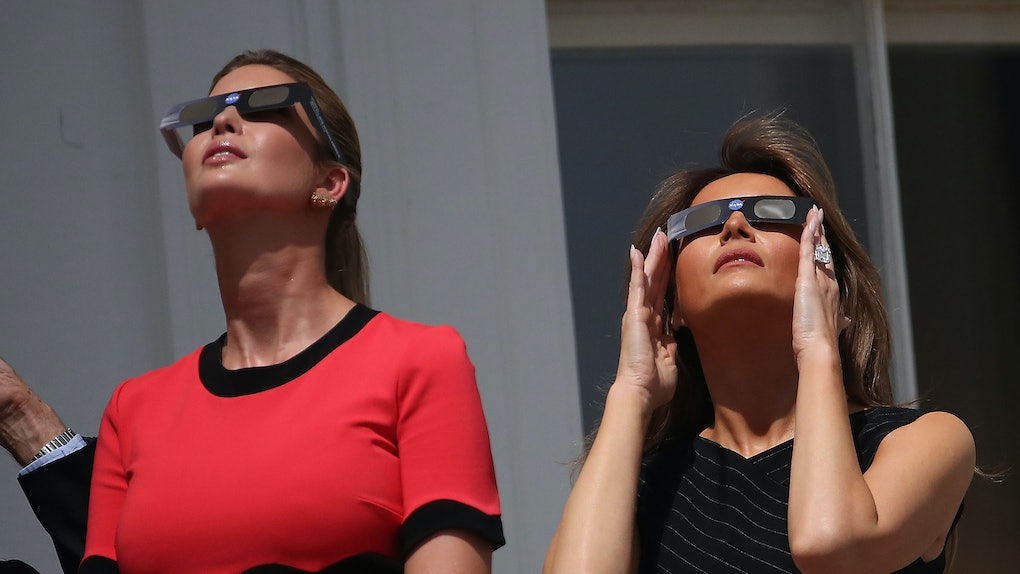 There's two women that the public has their eye on: Melania Trump and Ivanka Trump. While sometimes their roles in the White House are blurred, they can always be counted on to bookend President Donald Trump. But how do the two pillars on either side of the president feel about each other? These Ivanka Trump quotes about Melania show there's at least one thing they both connect on: motherhood.

Ivanka and Melania actually have quite a bit in common. They both have their own purpose in Trump's White House, they were both ambitious young women, and they're both mothers. Melania and Trump got married when Ivanka was already 24 years old, and so Melania didn't really need to be a mother to Ivanka, but she could be a friend of sorts — and that's exactly what she tried to be.

In a 2016 interview with Harper's Bazaar, Melania explained that Trump's grown children didn't really need her to mother them, "They are grown-up. I don't see myself as their mother. I am their friend, and I'm here when they need me," she said.

It makes sense, but it doesn't really give too much away about their relationship, it's also hard to figure out what Ivanka thinks about her stepmother. They don't seem to really interact too much, and as I hunted for clues and things Ivanka has said about Melania, it was a struggle. I didn't really know what to expect, but I found Ivanka seems to stay in one lane when talking about Melania. All the quotes I found were about how great of a mother Melania is to her and President Trump's son, Barron Trump. It seems like a very, let's say, diplomatic choice.

During a July 2016 interview with People, Ivanka took the time to comment on Melania, which doesn't happen very often. Ivanka praised Melania for being a great mother, although she also managed to sneak in a comment about Melania not being on the campaign trail. Ivanka said,

Melania is an unbelievable mother. It’s pretty uncommon for wives of candidates to not be on the campaign trail every day. And she made a decision I totally respect, which is that she has a young son, he needs stability, he needs routine. My father’s traveling so frequently, and she is an unbelievably consistent, loving and reliable figure in Barron’s life.

It's kind of sweet, but then also maybe not? The aside about her not being on the campaign trail comes off as a bit of shade, but she makes a very good point about Melania being there for Barron, so I can't tell if it was genuine or not.

It's always hard to tell what families in the spotlight actually think of each other, especially families in or en route to the White House.

Melania as an inspiration.

In that same 2016 interview with People, Ivanka said that Melania is an inspiration to her when it comes to motherhood. She said,

She takes [Barron] to school every day, picks him up every day. It’s a really remarkable thing and she’s a great inspiration to me as I raise my own children in terms of family first and having the right priorities.

Are you noticing a pattern yet? Ivanka and Melania are both mothers of young children (Barron, who's 12, is only six years older than Ivanka's eldest Arabella Rose Kushner), and I guess that's where they connect.

"A heart of gold," (also known as Melania the Mother Part III).

One of the nicest things Ivanka's ever said about her step-mother appeared in her book Women Who Work, which was published in May 2017. Ivanka wrote that Melania has a "heart of gold..." and also that she's an "unbelievable mother." It read,

Melania, you are an unbelievable mother with a heart of gold. You give generously of your time and attention and I appreciate your support and friendship.

The pattern is still there, but Ivanka is speaking very fondly of Melania. Those are all really great compliments that I'd love to read about myself in a book written by my future step-children.

Even though Melania is Ivanka's stepmother, she never really needed to mother her, so it's even more interesting that all these quotes are about motherhood. They all comment on Melania as a mother — so can that be taken as how Ivanka feels about Melania as a person? I don't really know. Despite the compliments, I need some inappropriately-timed selfies to really sell me on the fact that they're close.