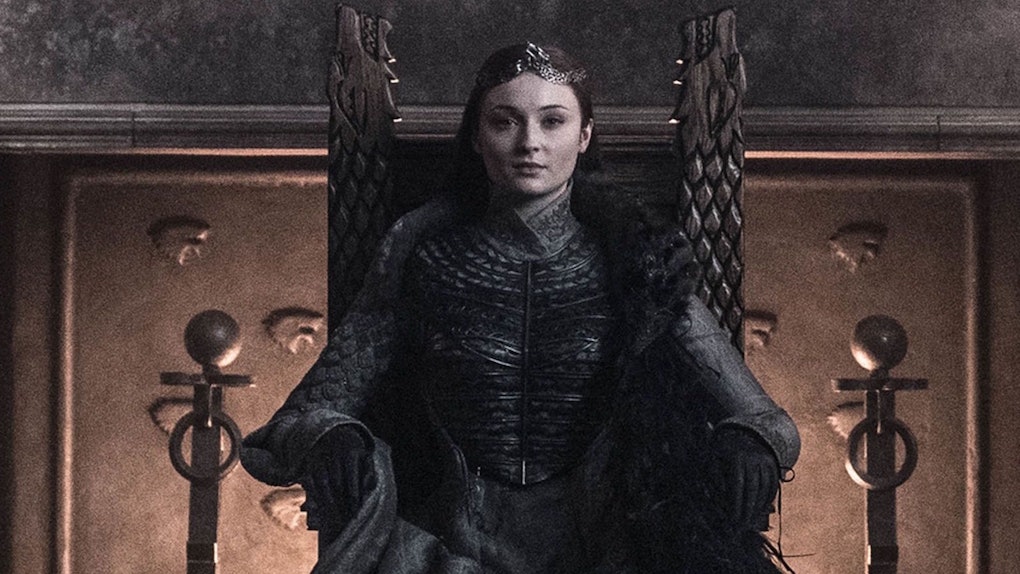 Game of Thrones has become known for its use of symbolism throughout its eight seasons, and of course, its series finale included one particularly symbolically rich scene that many fans might not have gotten the full effect of on first watch. Some eagle-eyed fans noted that Sansa Stark's final outfit on the show was more than just a beautiful gown — it also carried a ton of meaning for the whole Stark family. These hidden details in Sansa's Game of Thrones finale outfit add an entirely new layer to her ending.

Spoiler alert: This post contains spoilers from the Game of Thrones series finale, "The Iron Throne." Despite a number of fan theories and predictions to the contrary, the Stark children actually made it out of the game of thrones pretty much intact. Although Robb Stark and Rickon Stark did meet their ends earlier on in the series, Sansa, Arya, Bran, and Jon Snow all lived to the end and got their own perfect endings. Jon reunited with Ghost and Tormund to live out the rest of his days up north, Bran became the king of Westeros, Arya set out to discover new lands in the unknown west of Westeros, and Sansa secured Winterfell's independence and became the Queen of the North.

In Sansa's last scene ever, we see her getting dressed in an ornate coronation own before her subjects chant "Queen of the North" as she takes the newly created throne. Although she may be separated from the rest of her family, a fan on Tumblr pointed out that her queen outfit includes subtle nods to each member of the Stark family.

The black fur coat that Sansa wears is simultaneously a shoutout to Jon Snow, Arya Stark, and her fallen little brother Rickon Stark. The black fur is the same as Jon's iconic coat that he constantly wear at the Night's Watch, and the styling of the cloak where it only falls to one side of Sansa's body is a nod to how Arya is often seen similarly wearing cloaks, including in her final shot. The shagginess at the bottom of the cloak is reminiscent of Rickon, who was known for his shaggy hair and even named his direwolf Shaggydog.

The rest of the outfit includes other small nods to the rest of Sansa's family members. Her crown featuring two wolf heads is in memory of Robb Stark, whose cloak featured a similar design at its clasp. And the scaly pattern on her right sleeve is a remembrance of her mother Catelyn — the scales represent the fish sigil of Catelyn's family in House Tully.

Finally, the overall gray color of the gown is to honor Ned Stark's house and her ancestry as a whole. There are also some embroidered weirwood leaves inside her sleeves to represent Bran.

And Sansa did not forget to represent herself, either. A quick shot shows that a sewing needle is tied to the back of the gown, as a nod to Sansa's hobby that Arya found so distasteful in the first season.

All of these details show that although Sansa is ruling the north on her own, she is still always thinking of her family.