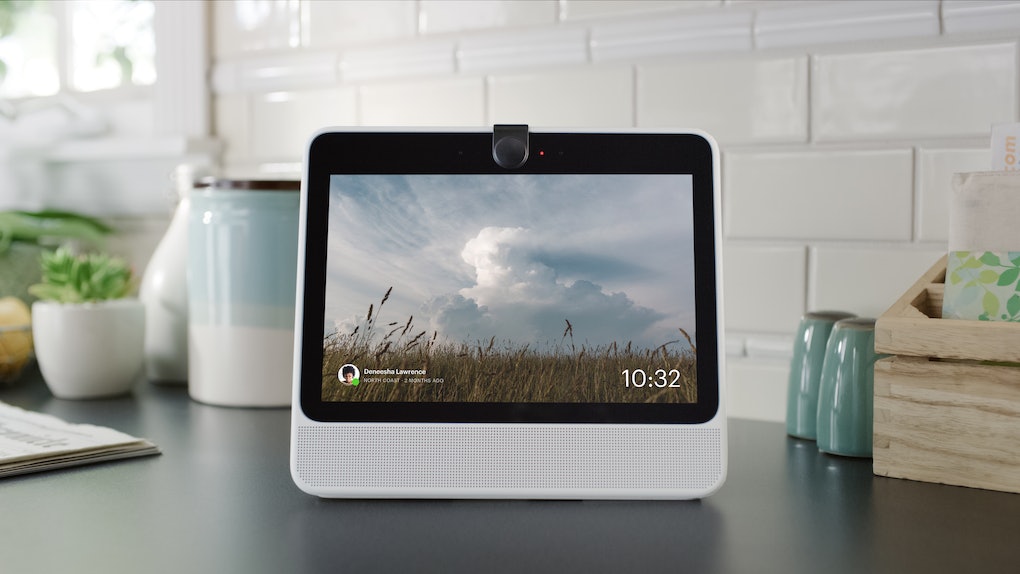 These Facebook Portal Updates On Dec. 14 Will Let You Do So Much More With Your Device

Facebook's Portal is a relatively new device that can be used to make high-quality video calls. Portal was released in November and is already undergoing massive updates that make the device even more functional than when it first became available for purchase. These Facebook Portal updates will let you do so much more with your device, including easier ways to stay connected with the fam. The impressive apparatus includes a slew of new features to make your life a little easier.

Facebook's Portal is so much more than a video-calling device. The Portal offers video chatters a brand new interactive experience. Starting with an automatic update rolled out to Portal devices on Friday, Dec. 14, users will be able to apply augmented reality effects during video calls. These fun filters include North Pole Knits Elf, Spa Day, and Tropical Lut from Messenger, according to Facebook.

Portal users will also be able to call people based on the established relationship that is dictated on a Facebook profile. You know when you click the "About" section of a Facebook profile and it shows you a list of people that said Facebook user has designated as specific members of their family? This could be a mom, dad, husband — whatever type of relationship. Well, now you can ask Portal to call any one of those family members, as long as the relationship is Facebook official. It is as simple as saying, "Hey Portal, call my mom." Pretty cool, right? I think so.

One of the coolest features already on the Portal is the Smart Camera. This feature is driven by artificial intelligence and automatically pans and zooms the camera so that the entire fam is in view. The Dec. 14 update will give users the new Manual Mode for Smart Camera. This feature lets you focus in on one person during a video chat call, or you can simply pinch and zoom to adjust the display and focus during the call. Oh, and if you want to play a little music during a video chat, now you can thanks to the addition of iHeartRadio, Spotify (premium accounts), and Pandora.

The new features don't stop there. Facebook is also partnering with ABC News and CNN to bring users the latest headlines, as well as an entire library full of human interest stories from Great Big Story. Facebook is also rolling out a web browser for Portal (!!!). You'll be able to use it to get to your fave sites, like YouTube. Another useful addition? You can check out AllRecipes.com for all of your holiday baking needs. Just cue up the Portal and follow the recipe right in your kitchen. Portal has something for everyone, including sports fans. The device will include the capability of streaming Monday Night Football on ESPN, as well as other sporting events.

Finally, Facebook will offer games on the Portal. The Instant Games don't contain any ads (phew) and include App Store favorites like Words With Friends, Battleship, and Sudoku.

As part of a holiday promotion, Facebook is offering $50 off Portal devices until Monday, Dec. 24. The Portal starts at $149 and the Portal+ starts at $299. The Portal+ is just a larger version of the regular Portal. If you haven't found a gift for mom or dad yet this year, a Facebook Portal might be just the present to set them up with. Your parents will probably appreciate the sentiment behind the gift. This one is also a good gift to give if you're in a long distance relationship. Or, if you just enjoy a little extra help in the kitchen when you're whipping up your next meal, go ahead and treat yourself. I know I will be.

More like this
These Tweets & Memes About The Purple iPhone 12 Are Seriously Hype Over The Hue
By Lara Walsh
Here's Where To Find iOS 14 App Icons To Customize Your iPhone Home Screen
By Lara Walsh
Can You Blur Your Zoom Background On Your Phone? Here's The Deal With This Clutch Feature
By Lara Walsh
Stay up to date