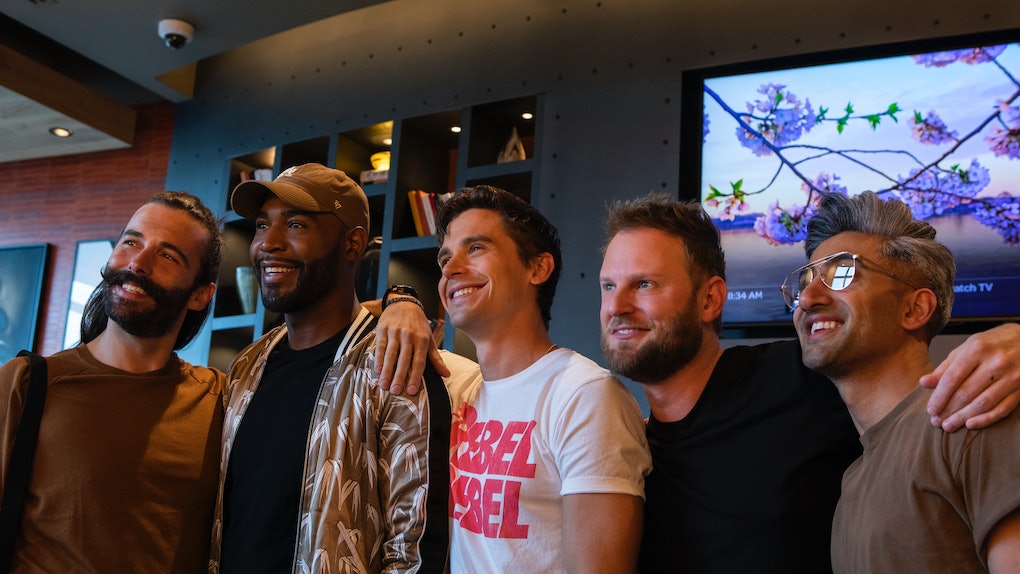 Since their Netflix debut in 2018, the men of Queer Eye have inspired personal change in Atlanta, Kansas City, and even Australia. It's safe to say that their appeal is universal, and the Fab Five are set to prove that even further with their next international adventure. These details about the Queer Eye Japan-based episodes have me dreaming of a direct flight to Tokyo, but let's catch up on what's in store for the men there before I grab my passport.

ICYMI, Queer Eye is slated to travel to Japan in four episodes premiering on Netflix later this year. When the news first broke in January 2019, Netflix tweeted, "The Fab Five will work with local tastemakers to make-better a new group of heroes, while they learn and experience Japanese cuisine, fashion, design, grooming and culture firsthand." Can you believe?

In February, Netflix Japan's Instagram account then shared a pic of the five Queer Eye stars dancing across a Tokyo street with Japanese actress, model, and singer Kiko Mizuhara. Fashion expert Tan France also introduced Mizuhara to his Instagram followers, calling her "the newest addition to the Fab 5 crew." Although premiere details for these episodes are still under wraps, culinary guru Antoni Porowski has now spilled more about what fans can expect from the gang's Japanese tour.

"I think you're gonna fall in love with the heroes again," Porowski told Entertainment Tonight. "We thought we were going to be so different going in, at least I did — but there are a lot of cultural differences and how we express love, and it's really interesting to navigate...but at the end of the day, one needs to be told that they are worthy. Everyone deserves love, and everyone needs to show their love to at least one other person in their life."

Porowski, France, grooming guru Jonathan Van Ness, interior designer Bobby Berk, and culture expert Karamo Brown kept fans updated on the behind-the-scenes of their trip via Instagram. Back in February, JVN documented his time on a tour bus and waiting for a Tokyo subway, while France posted a sneak peek at some of the group's cultural outfits that Porowski called "bonkers" while speaking to ET. In addition to hitting up Tokyo, the men's Instagram posts hint at stops in Harajuku and Kyoto.

While the Fab Five's venture to Yass, Australia, was technically just a mini-sode of the series, this Japanese adventure is certainly of epic proportions, and the show's creative team understands why such a journey was fitting for the Queer Eye gents. In a statement, Queer Eye creator and executive producer David Collins said about the project:

In just a year since we launched Season 1, Queer Eye has become a global phenomenon once again and the Fab Five are truly the ambassadors of self-care and compassion that the world needs now more than ever. Filming in Japan is a wonderful opportunity for us to work with four deserving heroes that will help showcase the incredible traditions and customs of their country.

Here's hoping that this trip to Japan leads to even more heartwarming travels across the globe for the Fab Five. Queer Eye: We're In Japan! premieres on Netflix later this year.